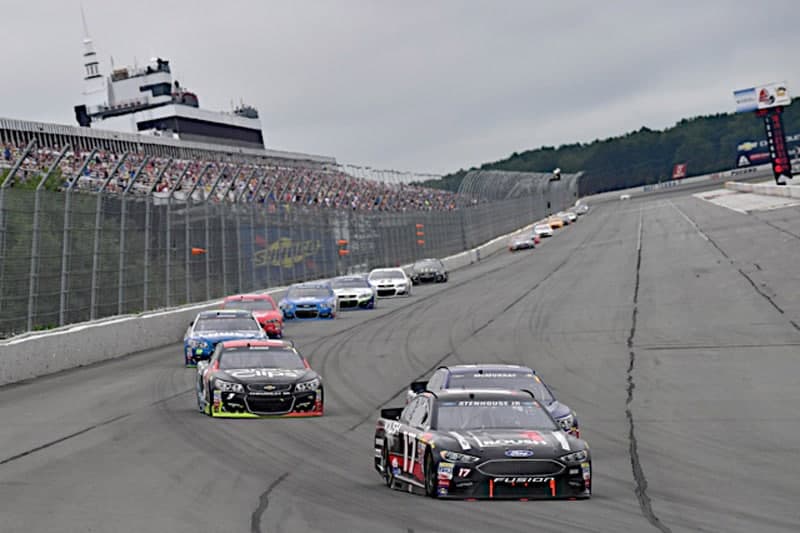 Who’s in the headline – Chris Buescher took one of the biggest Sprint Cup underdog victories ever seen in Monday’s Pennsylvania 400 from Pocono Raceway. Buescher played the fuel game to perfection as impending weather hit the “Tricky Triangle.”

Leading the first laps of his Cup career when the leaders took to pit road, the rookie grabbed just the second ever win for Front Row Motorsports. In doing so, Buescher threw his name in the Chase picture, now sitting six points behind 30th place David Ragan in the standings.

What happened – Strategy was fruitful in the Pocono Mountains. Then again, Monday races will do that to you.

Kicking off with a competition caution on Lap 15, pole sitter Martin Truex, Jr. was the first to find trouble, cutting a tire on Lap 17 – his first of three issues throughout the day.

With one of the quickest cars out of contention, Pocono became one of the only races in 2016 to lack a true dominator. Joey Logano led 38 of 138 laps, the most of anyone but  contact with Chase Elliott 100 laps through wiped him out from contention.

As weather stood as a constant threat, others shared the spotlight with Logano. Austin Dillon and Kyle Larson put on quite a show at the halfway point. They beat, banged and traded the lead before Logano pounced past the two Chevrolets on Lap 81.

In the end, Larson appeared to edge out front with the fastest car. But Buescher and Regan Smith, both driving for lower-tier teams chose to gamble with Mother Nature after the lead cars pitted during a green-flag pit cycle. Once immense fog rolled into the Turn 1 area, the race was soon red-flagged, later awarding Buescher the wild victory in Pocono once thunderstorms surrounded the raceway.

Why you should care – The only rookie to make the Chase for the Sprint Cup was Denny Hamlin in 2006 [10 years ago]. With Buescher’s win, he’s now in a battle of points to do the same. Front Row Motorsports teammate Landon Cassill and Ragan, the only other driver to win for FRM stand in his way with five weeks remaining. Buescher’s potential crash of the Chase party would be the most surprising postseason bid yet and shuffles up the bubble picture as everyone jockeys to complete the 16-driver lineup.

What your friends are talking about – NASCAR announced updated race start times for the 2017 season. Moving the races closer to primetime is designed to increase revenue for the broadcast partners since they can charge higher advertising rates along with bringing exciting finishes of races to larger audiences. Unfortunately, that also eliminates wiggle room if inclement weather comes into play. Races at Michigan, Pocono, New Hampshire, Indianapolis and Watkins Glen are all among those with start times pushed back. None of those tracks have lights, meaning any kind of rain delay is going to result in a shortened race or a postponed event. The idea of late start times sounds great on paper; problem is, Mother Nature doesn’t read. We all know it rains in the summertime and smaller race windows are a recipe for disaster.

Another competition caution was called this weekend and again, it did not serve its intended purpose. With all of the rain this weekend it made sense to have the cars come to pit lane so the teams could evaluate tire wear, which is the safety angle that is always fed to us as the reason for the cautions. Unfortunately, most drivers took two tires and two drivers took none, wiping out most potential “research” for Goodyear. If you are going to call a manufactured caution, doing so in the name of making racing safer you’d think all teams should be required to change all four tires.

NASCAR is implementing safety changes for the restrictor plate tracks in 2017 and all tracks in 2018. After a spurt of recent injuries, teams and stock car officials have worked together to make improvements to the cars to try and protect drivers’ legs and feet. New materials, thicker components and fewer welds are all designed to keep driver lower extremity injuries to a minimum. The changes are voluntary this year, mandatory at Daytona and Talladega in 2017 and for all cars in 2018. The phase in is designed to prevent obsoleting existing chassis, saving money for teams in the short run. As each organization develops new chassis that are certified by NASCAR they can implement the changes as they go.

Ticket revenue has dropped through the first 15 events of the season based on financial reporting for SMI and ISC this past week. SMI reported an 11 percent drop in ticket sales along with reduced demand for corporate suites, track rentals and corporate entertainment. ISC’s ticket sales dropped 8.3 percent. Through the corporate speak, one thing is certain, though; the sport is losing at-track fans and the product needs to get better to bring them back. The new aero package is providing better racing but that has to be sustained for a period of time before the fans will return.

Dale Earnhardt, Jr. is not seeing much improvement of late in his condition.

Update: No change lately. Symptoms have plateaued over the last week. Balance/Gaze Stabilization are only issues. Docs preaching patience.

That reality also led to the acknowledgment a return to the track is not imminent. Jeff Gordon says he’s willing to continue filling in, which would certainly be logical for Watkins Glen. Beyond that? Hendrick Motorsports isn’t really sure. It could be Gordon or perhaps another young driver like Alex Bowman will fill in until Earnhardt is healthy.

Forget the 2016 Chase, whenever NASCAR’s Most Popular Driver returns; the concern here for Earnhardt is long-term. A slow recovery from this concussion could very well lead to advice from doctors to curtail racing activities, if not force him to retire altogether. Could the sport see the loss of Tony Stewart, Gordon and Earnhardt in a three-year span?

Who is mad – Martin Truex, Jr. started on pole and was looking to notch another win at Pocono. Unfortunately, during the competition caution pit stop the valve stem for his inner liner was knocked off of the right front tire. The resulting flat and contact with the wall in Turn 2 ended his hope for grabbing another Pocono trophy.

Who is happy – Tony Stewart has simply turned his season around. Following his surprise Sonoma win, Smoke has seemed to be in the top 5 more often than in the past three seasons combined. A fifth-place finish at Pocono stands as Stewart’s third top 5 in the last four races.

Kyle Larson could be on the mad side of things, as he proved to have a quick enough car to race for the lead. However, in the grand scheme of things, Larson remained above the cut line within the 16-driver Chase. Leading 37 laps, a sixth-place result stands as the first back-to-back top 10s of his 2016 season.

When the checkered flag flew: After 21 races, Brad Keselowski, Kyle Busch, Carl Edwards, Jimmie Johnson and Matt Kenseth are all locked into the Chase assuming they attempt the remaining events. Kevin Harvick, Kurt Busch, Joey Logano, Martin Truex Jr., Denny Hamlin and Tony Stewart have one win and will be locked in provided there aren’t new winners in all of the remaining races.

The remaining Chase drivers at this point and their point position:

Keep in mind Buescher remains outside the top 30 in points which would prevent him from qualifying for the postseason.

What is in the cooler – You never truly know what to expect when you race in the Sprint Cup Series… especially at Pocono. With wacky weather and a weird ending Pocono, Pennsylvania, stands second only to the wild Las Vegas race earlier this year as the season’s most unpredictable event.

“What’s next, mudslides and volcanoes?” Carl Edwards joked during the race’s red flag.

Though it was a bit too humid for snowfall, the on-and-off mist, threatening rain and a lightning warning complemented occasional rays of sunshine to make the postponed and rain-shortened Pennsylvania 400 one for the meteorologist’s history books. We’ll give it five cans of cold Yuengling Lager in tribute to the Pennsylvania mountain weather that spawned all this crazy.

Where do you point your DVR for next week – The circuit heads to Watkins Glen for the second road race of the season next weekend, a very familiar event that will be televised on a very unfamiliar channel for NASCAR fans. With the Rio Olympics taking over NBCSN for the next three weeks the Cup Series moves to USA Network.

Action for this event starts on USA at 2:30 p.m. on Sunday, August 7. It can also be seen on NBC LiveExtra. You can hear the race on your local MRN affiliate and SiriusXM NASCAR Channel 90.

Will Chris B. with his rain soaked win get the ROTY or will Crashin’ Clyde get it? Go Ryan Blaney!!!!!!

I see lazy axiom “it takes two to tango” is at work here…….

Really? We are awarding cans of beer to rate a race based on the weather now?

Yeah, later start times, that makes a lot of sense. My prediction, no increase in ratings and further eroding of track attendance (getting home later on a Sunday night with work the next day is not a good thing).

BTW, comparing Hamlin making the chase as a rookie in 2006 to Beuscher in 2016 is apples to oranges. Hamlin had to be in the top 10 in points in 2006 to make the chase, not just back into a win, which means he had to consistently run well the entire season.

Too bad it wasn’t Danica, she has made a career out of winning a rain shortened race.

Jeb did the job he’s supposed to but why take out the 43? Brian’s money was well spent getting him a Cup ride. Guaranteed caution.

Danica got the free pass on Jeb’s caution.

Who took the 43 out other than it’s own driver? Almirola screwed the pooch on that deal.

if princess sparkle pony had won nascar would have been singing from the highest mountain. that’s what they want. however i doubt it will happen.

If Danica was in front there’s no way it would have dragged on like it did.

Had she or the 88 been in front, the race would have been called before the red flag even came out.

It’s always good when a back marker team pulls one off and snookers the big guys! There were two things though. One was the interview with Tony Stewart as the cars sat on pit road during the red flag. Stewart was praising Chris Buescher. Then again, so was Keselowski. But it was Stewart’s praise that raised a flag, at least with me! The second thing was something pointed out on another site’s comment section. Chris Buescher has “bad equipment” (their comment), has 27 career Cup starts, and has one win. This “other driver” has good equipment, and 139 career Cup starts with “0” top-5’s. That driver finished 22nd yesterday. Going back to Stewart’s praise of Buescher, could it be that, maybe, he’s getting a little tired of having an under-performing driver? And maybe he has his eye on Chris? Sponsorship be darned! And there hasn’t been much focus on “that other driver” during the broadcasts this year. Even FOX didn’t pay that much attention to “that other driver”. Buescher is under contract with Ford, and Stewart is switching to Fords next year. Danica had better be looking over her shoulder, and had better start doing better.

Something to think about!

Well SHR is starting an Xfinity team next year. Probably where the driver of the 10 car belongs.