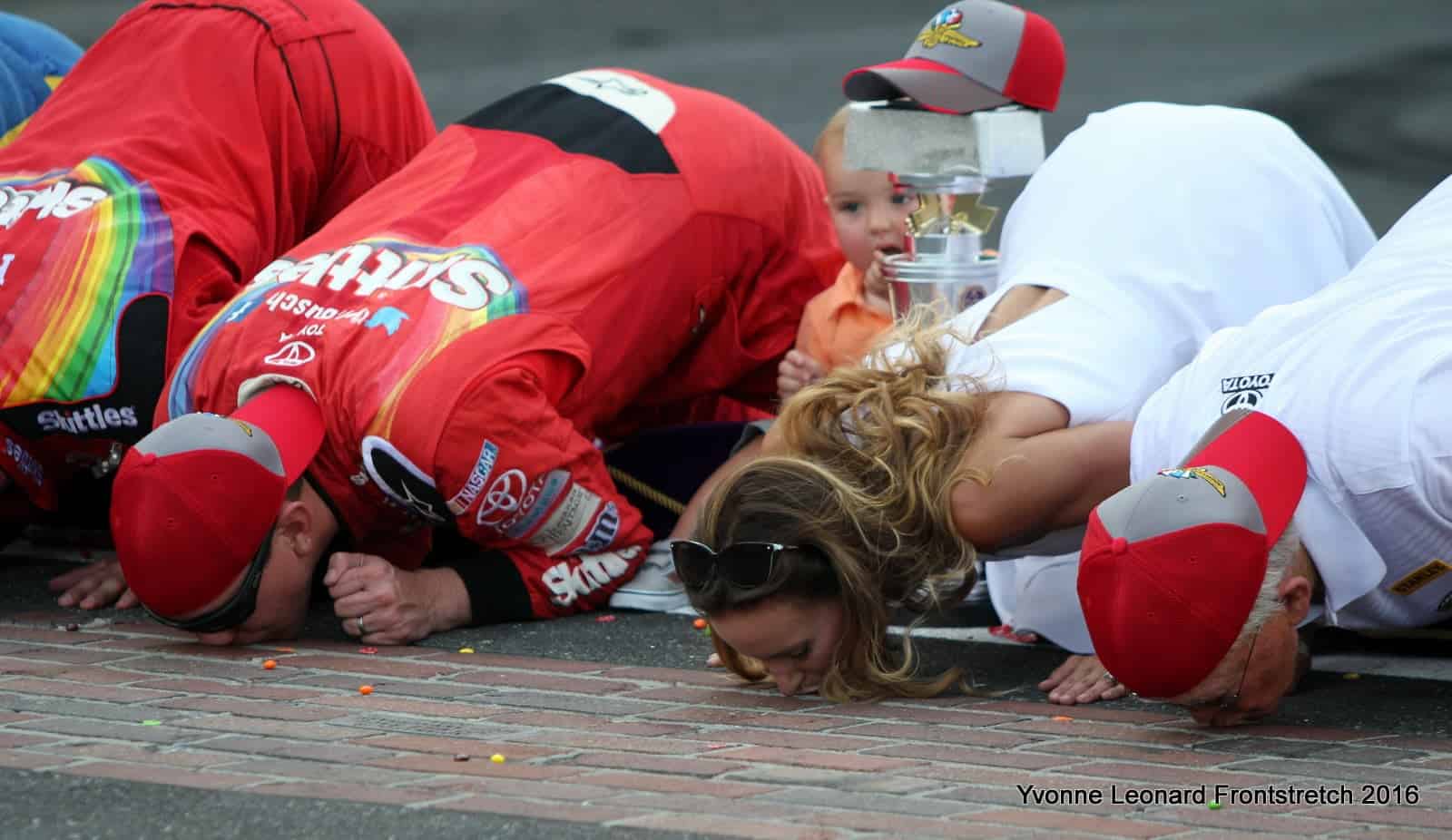 Who’s in the headline – Kyle Busch pulled out the broom stick for the second year in a row at Indianapolis. To make it even more exciting, this year, he not only swept both races at Indianapolis Motor Speedway, he won both poles as well. Busch dominated the event, leading all but 21 laps en route to the victory.

Busch led Joe Gibbs Racing‘s dominance of the event again as teammates Matt Kenseth and Denny Hamlin finished second and fourth. Carl Edwards was second until he wrecked out on a late restart and Martin Truex, Jr. was in the top 5 for much of the race before being shuffled out in late race restarts.

What happened – Busch ran away and hid early in the race, but the Team Penske teammates of Brad Keselowski and Joey Logano tried a long pit strategy that put them out in front for 21 of the first 61 laps. Over the final 108 laps, it was all Busch out front no matter how many restarts were thrown at him.

The race saw Tony Stewart’s final Brickyard end with an 11th-place finish, while Jeff Gordon’s “last” Brickyard came to an end in 13th position. IMS and Hendrick Motorsports received their desired boost in attention and merchandise sales, along with a significant uptick in ticket sales during the week.

Why you should care – The only thing that you should care about at this point in time is that the JGR camp is still the team to beat in Sprint Cup and HMS is still struggling, even though Jimmie Johnson somehow pulled out a magical third-place finish.

What your friends are talking about –

Matt Kenseth failed post race laser inspection at New Hampshire. On Tuesday it was announced that he was docked 15 driver and owner points and his crew chief Jason Ratcliff was fined $25,000. Kenseth will still be allowed to keep his three bonus points for the first round of the Chase.

On the heels of Gordon filling in for Dale Earnhardt Jr., Stewart noted that he would not rule out filling in for other drivers next season and beyond. All fans know that drivers are injured from time-to-time and, with the current environment, will sit out of races in the interest of health and safety. There are certainly worse drivers that can be plopped into the seat of a Cup car than the three-time champion Tony Stewart.

Speaking of Gordon filling in, Earnhardt sent out a tweet this week that he finally sensed some improvement in his condition. He has been battling balance issues and nausea. He has been working on his concussion-like symptoms for 10 days and stated that he finally feels like there is a light at the end of the tunnel.

While many people feel that NASCAR is dying a slow and painful death, an internal analysis of Fortune 500 companies points in the opposite direction. One in four of the Fortune 500 incorporate NASCAR in some way, shape or form into their marketing strategy. For those who watched the Brickyard you saw the Auto Owners Insurance paint scheme for Martin Truex Jr. They are one of several companies who have moved into the sport in the past few months. Large companies are still finding value in partnering with the sport and the loyalty of fans to brands is a big part of that.

A gentleman is suing Daytona International Speedway for injuries incurred when Austin Dilon’s car flew into the catch fence last summer. He maintains that the speedway didn’t remedy situations from previous experiences of fans being injured by flying debris. Perhaps he should read the back of his ticket and realize that racing is dangerous and you agree to view at your own risk.

Who is mad – Edwards was on the verge of a Brickyard victory and most definitely was going to come home with a top 5 until he was shuffled out on a Lap 155 restart and ended up wadded up in Turn 1. The damage was too extensive and, while he drove the car to pit lane, he was unable to continue.

Ryan Newman has won at IMS in the past and consistently comes home with strong finishes in his home state. On Sunday, he was poised for another solid run when Jamie McMurray slid down across the track and back up into the groove. McMurray collected Newman and sent his hopes of a top 10 crashing into the outside wall.

Keselowski was another driver who looked like he was potentially going to challenge Busch for the win, even if it was going to be on pit strategy. After taking two tires from the lead Keselowski struggled and fell back through the pack He clawed his way forward late in the event and was knocking on a top 5 door when Edwards had his issue. Keselowski was caught up in the incident and it ended up sending him to a 17th place finish.

Who is happy – Johnson qualified 13th for the 400, but his car was markedly faster in practice and the first round of qualifying. As the race unfolded Johnson climbed well into the top 10 before a pit road penalty dropped him into the 20s. Slowly but surely Johnson marched back forward and amid the chaos at the end of the race he wrangled a third place finish.

Chris Buescher is another driver who took advantage of the late race shenanigans to better his position into a strong run. Buescher has been the forgotten member of Roush Fenway Racing this season while competing for Front Row Motorsports. While he’s contending for the Rookie of the Year, he’s been overshadowed by Ryan Blaney and Chase Elliott. Sunday, he started the race 22nd, but vaulted himself to a 14th -place finish and Rookie of the Race honors.

Paul Menard has won at Indianapolis before and he consistently soldiers to decent finishes at the track. Sunday was no exception as Menard started 23rd and plodded his way into the mid teens before the late race pandemonium. When the dust settled from the second Green-White-Checkered finish, Menard was sitting in 10th place.

When the checkered flag flew:

Kyle Busch scored his second consecutive victory at Indianapolis Motor Speedway on Sunday. It is his 38th career Cup series win in 410 starts.

This is Busch’s second career triumph at the Brickyard.

Busch’s win is his fourth in 2016, tying him with Keselowski for most on the season.

Busch is tied with Matt Kenseth for 19th on the all-time victory list. He is one behind Tim Flock and two behind Mark Martin.

Matt Kenseth finished second to Busch for his third top 2 of the season and second in a row.

The runner-up run for Kenseth is his third career second at Indianapolis.

Kenseth has been the first loser 27 times in his career. He is tied with Rex White for 29th on the all-time list, one behind Joe Weatherly.

Jimmie Johnson rounded out the podium with his first career third place run at Indianapolis. He has six top 3 runs at the Brickyard.

The third place is Johnson’s fourth of the season and his sixth Top 3 this year.

Johnson has finished on the podium 165 times which is ninth on the all-time list.

Chris Buescher was the Rookie of the Race with his 14th place finish.

What is in the cooler – The Indianapolis Motor Speedway was not designed for stock cars and generally doesn’t put on great races even for Indy cars, although the last few years have been pretty good. When NASCAR comes to Indy it isn’t for great racing, it is for the history and pomp and circumstance. That said, the racing this year was truly subpar. Part of that is probably due to the total domination of Kyle Busch while some of it is due to the continued aero sensitivity of these race cars. The lower downforce led to a bit more passing but it wasn’t much. As a result, this one gets two cold Handymans from Big Lug Canteen.

Where do you point your DVR for next week – Next week it is off to another flat 2.5 mile oval as the series returns to Pocono. The activity at the triangular shaped oval begins at 1:30 p.m. on NBCSN and NBC Sports Live Extra. You can also hear it on your local MRN affiliate or SiriusXM NASCAR Channel 90.

Did the heat get to the race officials. (Nah, some of them would be dumb in the Arctic.) If you’re going to throw a red flag late in the race then by all means do a thorough clean up (and the cars should have been parked on pit road to facilitate that track cleaning) rather than return to the field to caution and burn up another three or four laps running under the yellow. If any of the drivers with fresher tires were going to do anything with Kyle Busch (highly unlikely though that might have been) they needed a few laps to do it.

i thought the same thing – it’s like they were trying to eek in the drama of people running out of gas (no one did) and accidents happening (success). I think they need a better package – seems like tire fall off is hard to predict here…if only they had tests, and engineers working on this…..if only…..

If you have the green/white/checkers, why red flag at all? You are guaranteed two racing laps at the end of the race. Woo-hoo! That is basically what we got anyway. The same thing was done at Eldora on Wednesday. Maybe NASCAR could learn something from the WOO on track clean up and restarts afterward. Man, they are bad.

Internal analysis? That reminds me of the SNL, “I’m good enough, smart enough, and people like me” bit.

I’m not sure whether this or the “significant uptick in ticket sales” is the phrase of this column.
So without the publicity stunt of a putting a retired driver in the 88 car there would only have 25,000 souls there?

Brian must have fallen off his bar stool when Helton phoned him to tell him about the carnage at the end of the farce.

“Wow, your majesty. Your genius idea about the double file restarts and GWCs causing big ones is working. And it looks like it was worth it to give some money back to Mr. Hendrick to get Gordon in the product.”

Fox showed the NHRA races from Denver opposite the Indy love-in on the national network. It was nice to see real race cars. John beat Courtney in the final showing they’re Forces to be reckoned with.

I missed the 2nd half of the race bec I had to help a family member move. “Missed” is the operative word here. Didn’t miss anything. Another uncompetitive race except for the Joe Gibbs teams. ZZzzz. What a snoozer.