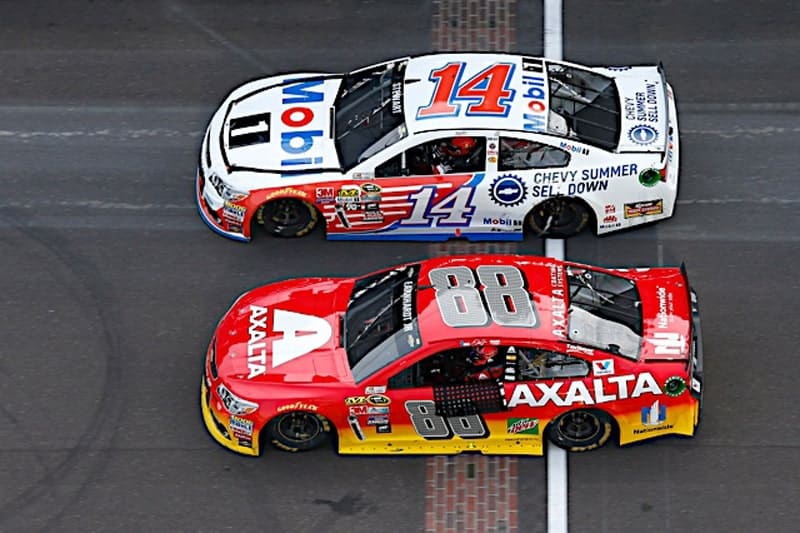 Kyle Busch might have dominated the race, but behind him another driver was reminding everyone why he’s got four Indy wins.  Seemingly down and out after a midrace speeding penalty, Jimmie Johnson was back in the top 10 by the end of the race and made an impressive run in overtime despite fuel worries to finish third, his best finish (and first top 10) since the Coca-Cola 600.  While it’s too soon to say that the finish represents a turnaround for the six-time champion’s season, it was a day Johnson needed to have.

A couple this week.  One, I know the drivers love racing at Indy, but NASCAR has had almost 25 years to prove it belongs at IMS—and come up short almost every year.  The track doesn’t compliment the heavy, cumbersome stock cars in a way that produces a compelling race most years, while the Indianapolis 500 is almost always exciting (not to mention, unlike the former Brickyard 400, race organizers would never dream of selling title sponsorship to Crown Royal or anyone else).

Yes, the track is iconic…but because of and for a different sport.  Sure, NASCAR and IndyCar are both motor sports.  Football and basketball are both stick-and-ball sports, but you don’t see the NBA clamoring to play at Lambeau Field because the place isn’t suitable for that sport.  If a player’s life ambition is to play at Lambeau, he needs to pursue football, not basketball.  It should be no different here—if a driver truly wants the honor of racing Indy, there are Indy cars for that.  NASCAR belongs at Darlington or Iowa, tracks that produce great stock car races. It’s time for NASCAR to leave Indy to the Indy cars and the history books.

But, the race did produce one moment that made fans stand and cheer.  When Tony Stewart decided he wanted to take on last victory lap of his home track, he could have done it alone.  Instead, he got on the radio and asked another legend to make that lap with him, and as Stewart and Jeff Gordon slowly circled the track, they received an ovation at least as loud as the race winner did, maybe louder.  It was another reminder that the old NASCAR is fading into the sunset; when Stewart retires after this season there will be just one full season champion left racing in the top series (Stewart and Gordon combined for five non-Chase titles).  The final lap by the pair at the track they both called their home track (Stewart was born a Hoosier; Gordon a transplanted one) was a moment to savor.

Where… did the pole sitter and the defending race winner wind up?

Kyle Busch won the pole and the race on Saturday (as usual).  He also won the pole for the Cup race.  And then on Sunday, he won that one for good measure. Winning both poles and both races in a weekend is a NASCAR first, and whether or not you agree with Busch’s continued racing (and often dominating) in the sport’s equivalent of the minor leagues, the driver made history this week.

When… did it all go sideways?

It almost didn’t. There were minor issues throughout the day—a flat tire here, out of fuel there— but the biggest incident came with just half a dozen laps remaining on a restart, when it appeared that Ryan Newman pinched Carl Edwards down until Edwards ran out of room.  The pair went around, and Edwards slammed the wall, ending his bid. Ryan Blaney also took a hard hit in the crash, and Brad Keselowski suffered damage as well. Proving the old “cautions breed cautions” adage correct, the ensuing restart featured a tangle between Trevor Bayne and Clint Bowyer.

The first overtime attempt saw Jamie McMurray cut across the nose of Tony Stewart’s car, slid throught he grass, and slid back onto the track, collecting Newman while Brian Scott spun in a chain reaction further back in the pack.  All of that happened before the overtime line, forcing another restart. What was the culprit for setting up the restart where Edwards and Newman got together?  Debris.  That’s right.  A debris caution triggered the most interesting part of a 400-mile race inside the final 50 miles.  Who’d a’ thunk it?

Why… did Kyle Busch win the race?

Busch’s dominance (he led 149 of the 170 laps) came from a combination of things: a great car, which is no surprise; and a track that was one of the most difficult to pass on this season.  Running at the front was a decided advantage and Busch certainly made the most of it.  There have been rumblings that Toyota has some kind of advantage this season, but it’s hard to say—does the new rules package somehow favor them, or does Joe Gibbs Racing simply have that package figured out better than anyone else?  (Of course, there are some who might say that JGR has been given a secret advantage, but really, there are some who might say that about any team they don’t like to see in the winners’ circle) Most likely it’s a combination of the two, but wit more changes coming for 2017, the real question will be whether the team can maintain its advantage.

How… did Indy affect the championship picture?

On one hand, Indianapolis changed very little.  Kyle Larson vaulted into 15th place (the cutoff spot as of now, since Tony Stewart is provisionally in on his Sonoma win) while Dale Earnhardt, Jr. fell out after missing his second race in a row with concussion symptoms, but Earnhardt dropping out was expected.  Stewart put another driver between himself and 30th in points with his 11th-place finish. If the race was an indicator (and Homestead is still a long way off), a final four made up completely of Joe Gibbs Racing and/or its affiliate Furniture Row Racing is a distinct possibility.

My rule of thumb is if the drivers love a track, the fans hate it and vice versa.

Without the attrition from the late race cautions, Jimmie Johnson would almost certainly have had a finish outside the top 5 … Nah, I don’t really think that deserves a shoutout.

Heck in the one of the post-race wrapups last week, Danica got props for a heroic Top 15 finish, benefiting from the usual combination of wave-arounds, free passes, and attrition from late race cautions. As they say, handouts breed shoutouts.