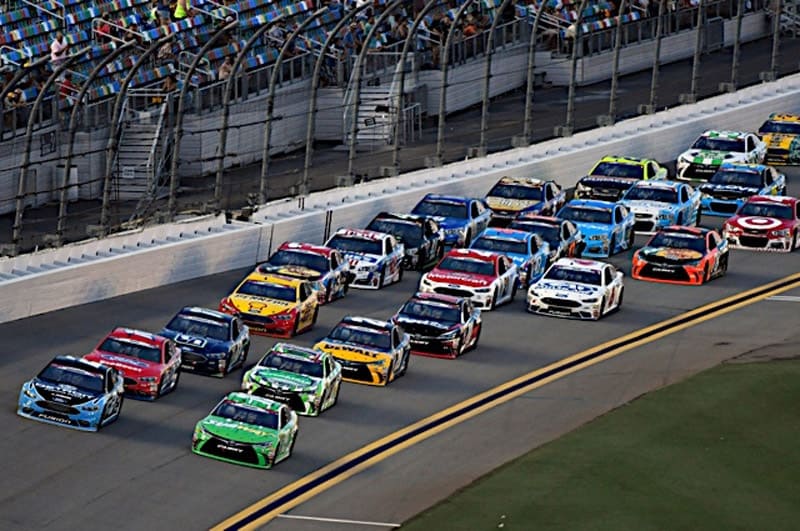 Perhaps the most positive thing that can be said for restrictor-plate races is that because the cars are more equal than anywhere else, a different group of drivers can shine. That’s what happened Saturday night; a small group of wheelmen whom fans are usually quick to write off shone bright under Daytona’s July lights.

Clint Bowyer, who’s always been good at Daytona but this year is driving for HScott Motorsports, a small team with virtually no assistance from larger organizations, finished an impressive ninth.  Michael McDowell, who races for even smaller Circle Sport Leavine Family Racing, came home tenth.  Cole Whitt, whose Premium Motorsports team makes the previous pair look like large operations, raced to 11th, and Germain Racing’s Casey Mears came from 21st to 12th on the final two-lap scramble after being collected in an incident while running inside the top 5.  It was a big night for some smaller teams, refreshing to see some different dogs in the fight.

While the racing at most tracks this season has been the best we’ve seen in the Cup Series in years, after two runs at Daytona and one at Talladega, it’s safe to say that the restrictor plate package needs a lot of work.  It’s become too hard to pass the leader, even with a line of cars to push and on Saturday night there was a whole lot of running in place. The rule of thumb for years at plate tracks was that the last place a driver wanted to be taking the white flag was the lead, because he’d almost always be challenged and often passed in that final lap.  Not so much anymore, where the leader can easily block a couple of lanes once he clears the pack.

The other thing missing with the current plate package in terms of racing (safety is a whole other can of worms) is drivers’ ability to move quickly through the pack with relative ease.  Fans who’ve been around awhile will remember Dale Earnhardt driving through the pack in what would be his final victory at Talladega in 2000, moving from 18th to the lead in four laps.  That kind of excitement is now lacking.  The racing has suffered at the plate tracks recently, but the “Big One” remains the same.  Time for NASCAR to go back and fix that….

Where… did the pole sitter and the defending race winner wind up?

Greg Biffle won his first pole since 2012 this weekend and, along with Roush Fenway Racing teammates Trevor Bayne and Ricky Stenhouse, Jr., made a solid statement that the team is making some strides in the right direction.  Even after getting a piece of a lap 90 melee, Biffle finished eighth in a race that saw all three RFR cars finish inside the top 10 for the first time in about two years. Bayne is now just 10 points behind a possible Chase spot with Stenhouse not far behind.

Dale Earnhardt, Jr. reigned supreme on the restrictor-plate tracks in 2015, but this year he’s 0-for-3 and in danger of potentially missing the Chase.  Earnhardt was one of many victims in a lap 90 crash triggered by Jamie McMurray and Earnhardt’s teammate Jimmie Johnson, leading to multiple pit stops under yellow to fix the damage.  The No. 88 was able to continue, but not contend, and spent the second half of the race in the back half of the field, finishing 21st in a race many expected him to win.

Johnson said McMurray checked up in front of him.  McMurray said Johnson ran into him from behind.  They may have both been right, but no matter who shoulders the blame, the end result was a multi-car crash that viewers have come to expect at restrictor plate races, involving well over a dozen cars and ending the night early for seven of them, including both Johnson and McMurray.

The crash highlights the catch-22 this kind of racing involves.  If the cars are too spread out, NASCAR fields complaints of boring competition, and if they race in tight packs, what should be a two-car incident turns into a 22-car melee in the blink of an eye.  It’s been 14 years since a restrictor-plate race has been run caution free and the last time Daytona saw fewer than five caution periods was 2004.  Do fans tune into plate races to see the crashes? Some deny it, others swear it’s the truth. All we know for sure is that if fans do enjoy the carnage, they won’t be disappointed at Daytona.

Why… did Brad Keselowski win the race?

Keselowski did something that drivers rarely do in a plate race — he dominated, leading 115 of 161 laps to take the win.  Keselowski was due for a victory at Daytona, having already won four at Talladega, but his triumph does less to spotlight Keselowski’s skill on the superspeedways than it does to show how difficult it is to pass the leader at Daytona.  The Team Penske driver ran an excellent race, but it was one where the competition didn’t have the capability behind him to pass.

At first glance, Keselowski’s third win of the year doesn’t seem to have much effect on the Chase field, and in itself, it doesn’t, other than moving Keselowski up a peg at the start.  But what happened deeper in the field makes a difference.  At least for now, Tony Stewart is inside the top 30 in points, and if he can stay there (he should be able to best Brian Scott and Regan Smith on a regular basis), that in effect makes fifteenth in points the new cutoff.  The higher standard knocks Jamie McMurray off the ladder, making the competition for those last few slots even more fierce.  As of now, 12th-place Austin Dillon is 29 points above the line, Dale Earnhardt, Jr. sits 28 points to the good, Ryan Newman has a 20-point cushion, and Ryan Blaney is on the hot seat by just four over McMurray.  To muddy the waters further, everyone back to 21st is within 21 points of Blaney, a group that includes, among others, former chasers Kasey Kahne and AJ Allmendinger.  The fight for a spot just got tighter, and there will be a sense of urgency from those who can still contend as the summer rolls on.

Finally, how come the small teams aren’t in what’s become their usual place this week?  Have no fear, the underdogs are still here (see what I did there?) They’ll have their very own feature column this week, so stay tuned, because you’re all invited to The Underdog House.

” Do fans tune in to plate races to see the crashes?”

Brian does. He must have jumped off his bar stool when he saw the big one, if he was watching.