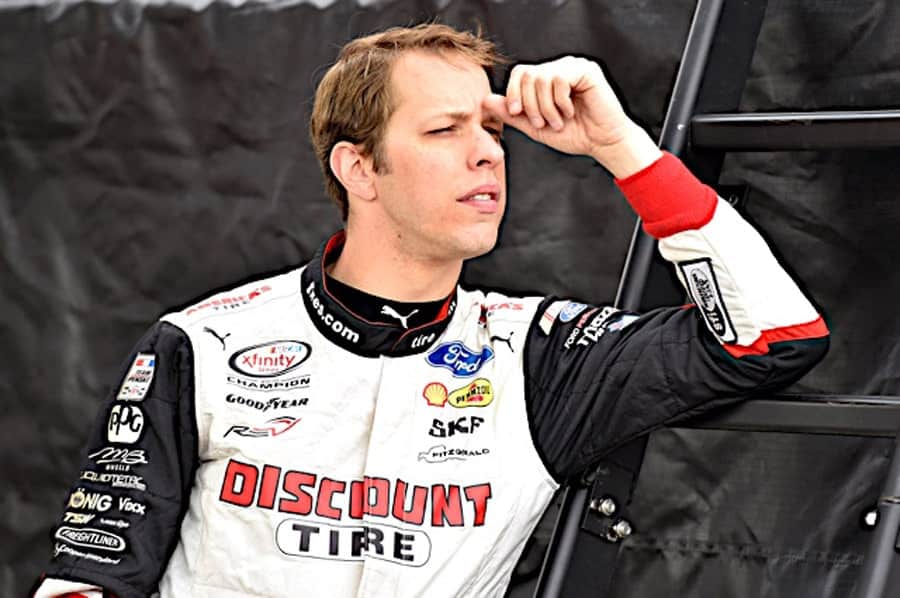 Will Brad Keselowski Spoil the XFINITY Series in Iowa?

Brad Keselowski will race the No. 22 Team Penske Ford in the American Ethanol E15 250 and stands as the only Sprint Cup Series regular in the field.

This instantly begs the question: Can he spoil the party on Sunday?

It’s safe to assume some fans didn’t like seeing the 2012 Cup champion on the entry list on one of the few standalone weekends the XFINITY Series gets each season, and looking at Keselowski’s track record at Iowa, the feeling can only spread, as he’s stacked three victories in just five starts.

But the Penske organization will have to step up a few notches to continue that level of performance. Through 13 races in 2016, the No. 22 is winless, has three top-5 finishes and has led 161 laps. Compare that to this point in 2015, when the No. 22 had three wins, nine top 5s and 702 laps out front — and with virtually the same driver lineup.

Despite a couple near-wins at Daytona International Speedway and Charlotte Motor Speedway, the three-driver squad of Keselowski, Joey Logano and Ryan Blaney has not been putting up the numbers this year.

Keselowski is hot off his debut experience behind an Indy car, after testing Simon Pagenaud‘s No. 22 Chevrolet Wednesday at Road America. Whether or not that accelerated thrill ride will boost Keselowski’s awareness system in time for Iowa remains to be seen.

What Challenges Will Meet Formula 1 in Baku?

Up hills, down hills and past towers: This the new Baku City Circuit in Azerbaijan that will await the Formula 1 paddock this weekend.

The 20-turn, 3.732-mile layout features a number of new challenges that most wide-flowing racetracks will not. With a few corners more narrow than some found in Monaco mixed with high-speed straights predicted to reach speeds of more than 210 mph, Sunday’s race — heck, the whole weekend — will spell new challenges for the field.

However, the circuit is already being put in negative light by some of the sport’s biggest characters. 2009 champion Jenson Button has taken notice of the winding roads that lack run-off areas. Additionally, a handful of drivers have looked at the interesting pit road entry, which will open opportunities for gain but can also present another possibility for accident.

“You either crash or you lose a lot of time,” Red Bull’s Daniel Ricciardo has said.

The fact these racecars are going to be hitting more than 210 mph on a street circuit is bonkers. Compared to Monaco’s short frontstretch, which can’t quite reach that 200 mph mark, this Baku track will be an edge-of-your-seat spectacle.

When it comes to the team who can best adapt to this all-around track, Red Bull can grab the victory, if the team can bring back its street racing swing that almost led Ricciardo to Monaco glory.

What Can John Wes Townley Do in His 100th Truck Start?

John Wes Townley will make his 100th Camping World Truck Series start once the green flag drops in Saturday night’s Speediatrics 200 at Iowa. With more than 14,000 laps, five top 5s and 23 top-10 finishes to his record, a victory last year at Las Vegas Motor Speedway is the ultimate in his NASCAR career, as he provided the series with a true surprise win.

Jumping to 2016, however, a pole position at Kansas Speedway currently represents the only candle in his dim 2016 campaign, as the 26-year-old sits 17th in points with only one top 10.

Friday night can be the race that straightens his curve, as he has four top-15 finishes in his last five Iowa starts, including his first top 10 in the most recent event. With three prior Iowa starts on the XFINITY side, Townley has some of the most experience to be found in the Truck Series field.

With time ticking to make the eight-driver Chase in September, a win would be nice for Townley. However, a solid, clean run would do justice in terms of racking up some points.

Contrary to the other rounds of 2016, Iowa does not favor the boys from Toyota.

In the 12-race history of the XFINITY Series at the 0.875-mile track, Toyota has only seen victory twice [Sam Hornish, Jr. in 2014 and Kyle Busch in ’10]. Additionally, Chevrolet, despite winning the inaugural event in 2009 with Brad Keselowski, has only won once more since then.

So who has been crunching the corn in Newton lately? Ford.

With three consecutive Iowa wins — coming with three different drivers — Ford has ranked up five of the last six race wins and eight of the last 10, dating back to a trio of wins from Ricky Stenhouse, Jr. from ’11 to ’12. That is eight of 12 races captured by Ford; a whopping 66 percent of Iowa’s races have seen the Blue Oval take the short track treat.

However, if there is going to be a year where that run of excellence is dimmed, it could be 2016, where Toyota has won eight of 13 races so far – all coming from Joe Gibbs Racing. With a strong outing last week at Michigan International Speedway by Daniel Suarez, Sunday could be the day where he and teammate Erik Jones march toward the Chase with a few more bonus points on their backs.

And don’t forget their first- (and perhaps only-) time teammate for 2016 in Sam Hornish, Jr. Subbing for an injured Matt Tifft, Hornish returns to Iowa looking for a sixth straight top-5 finish on the short track, including a win in 2014.

On the Chevrolet side of the garage, JR Motorsports has been the most consistent team all season, as its No. 88 car – despite seeing a circle of five drivers make a start – has finished 12th or better in all 13 races. Additionally, 2012 Iowa winner Elliott Sadler currently ties Suarez for the most top 10s this year (11). With how much the No. 22 Ford has been behind this season, it could be time for the other two to step up and grab the win.

I Agree No cup driver should be in there

You NEVER say that when KYLE BUSH runs the Xfinity Series . HOW many races has he SPOILED this year?

I can’t help but think that if Kyle Busch were running this weekend in Iowa, there would be the usual outrage, plus the opportunity to impugn his dedication to his first-time fatherhood. And with his designated driver Matt Tifft unable to compete, Rowdy had yet another chance to put himself in the car. Instead he is sticking to his original plans while Sam Hornish gets the chance to race in the 18. Too bad Brad didn’t do likewise.