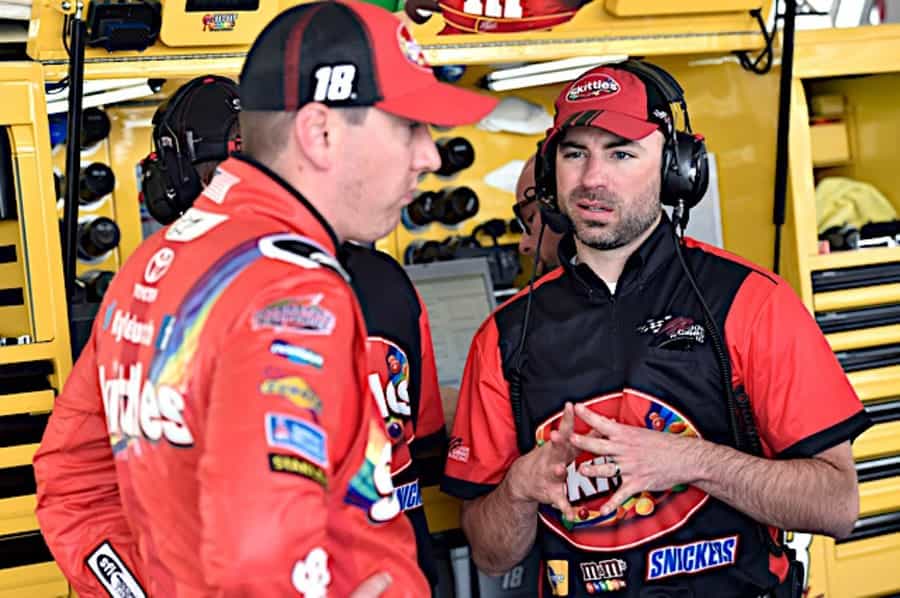 The race-winning team of Kyle Busch (Joe Gibbs Racing) was penalized on Wednesday for infractions found during the Kansas Speedway race weekend.

The No. 18 team, which scored its third win of the season at Kansas last Saturday night, was found to be in violation of the section in the NASCAR rule book pertaining to “parts or system configurations of importance not meeting the NASCAR rules.”

Five teams were also warned by NASCAR, including the No. 43 team of Aric Almirola twice, for failing multiple parts of pre-qualifying inspection.

The No. 7 of Regan Smith, the No. 47 of AJ Allmendinger, the No. 48 of Jimmie Johnson and the No. 78 of Martin Truex Jr. were warned for failing pre-qualifying inspection as well.

The monetary fine of $20,000 is trivial to this team. And suspending Adam Stevens is a joke. All Saint Joe will do is have Stevens stay in a hotel very near the track and communicate to the team via cell phone or a wifi/satellite connection. NASCAR made it clear that it’s five off – five on. The monetary fine, as someone suggested on another discussion, should have been, at the very minimum, fifty-percent of the prize money. And there should have been significant points taken away, both from the driver and the owner. Too, while Busch does have two wins previously, this third win should not count toward the total for the reset after Richmond.

One last point, NASCAR needs to have some sort of system in place to stop any communication between the suspended crew chief and the team. The penalty should be massive! If there is any communication, the team gets parked for the weekend. That would stop a lot of this nonsense that makes crew chief suspensions a joke.

You’re a hater, Ken. Does the racing world look exciting from your couch?

A hater? I hate to break the news to you, but, I would have said what I did, even if it involved a Roush driver. Get off your high horse just because I commented about what is basically a useless penalty.

Are you really that person who goes by the name Broken Arrow?

“Hater” has gone from being defined as someone who always dislikes a certain person or point of view, to a reflexive word thrown at anyone who dares to disagree in any way, about anything, at all, ever. Don’t like everything I like? You’re a hater. Bil Bl, Ken, kb, do what I do and just let your brain skip right over it.

Why should the win stand? Back when they actually enforced the lug nut rules he would have had to come back in to get them tightened. Being the last pit stop in this case they would have never been in contention to win.

I guess I am a hater of rules not being enforced and penalties not fitting the crime too.

Well teamd were given notice. What was cool last week ain’t cool today. Nascar’s change a minute is not the issue, how the teams keep up is. Until Nascar goes against one of their silly beliefs that basically a winner cannot become a non winner, this crap will continue. Screw the sponsors and the like..let the teams deal with it. Nascar needs to send a message. The good employee Adam, will be in the nearest hotel room with all the comforts and communication. What a joke. But then again in the future the joke is always how this particular “rule” will applied in the future. Will there be no penalty or will the penalty be worse than this? And for the record, this is laughable.

Anyone who didn’t see this coming is named Brian Z(ombie) France.

Not having all 5 lug nuts tight made KB’s car the fastest and pulled away from the rest of the field. He should have the victory taken away.(sarcasm)
Too many rules, fines and suspensions in all of auto racing.