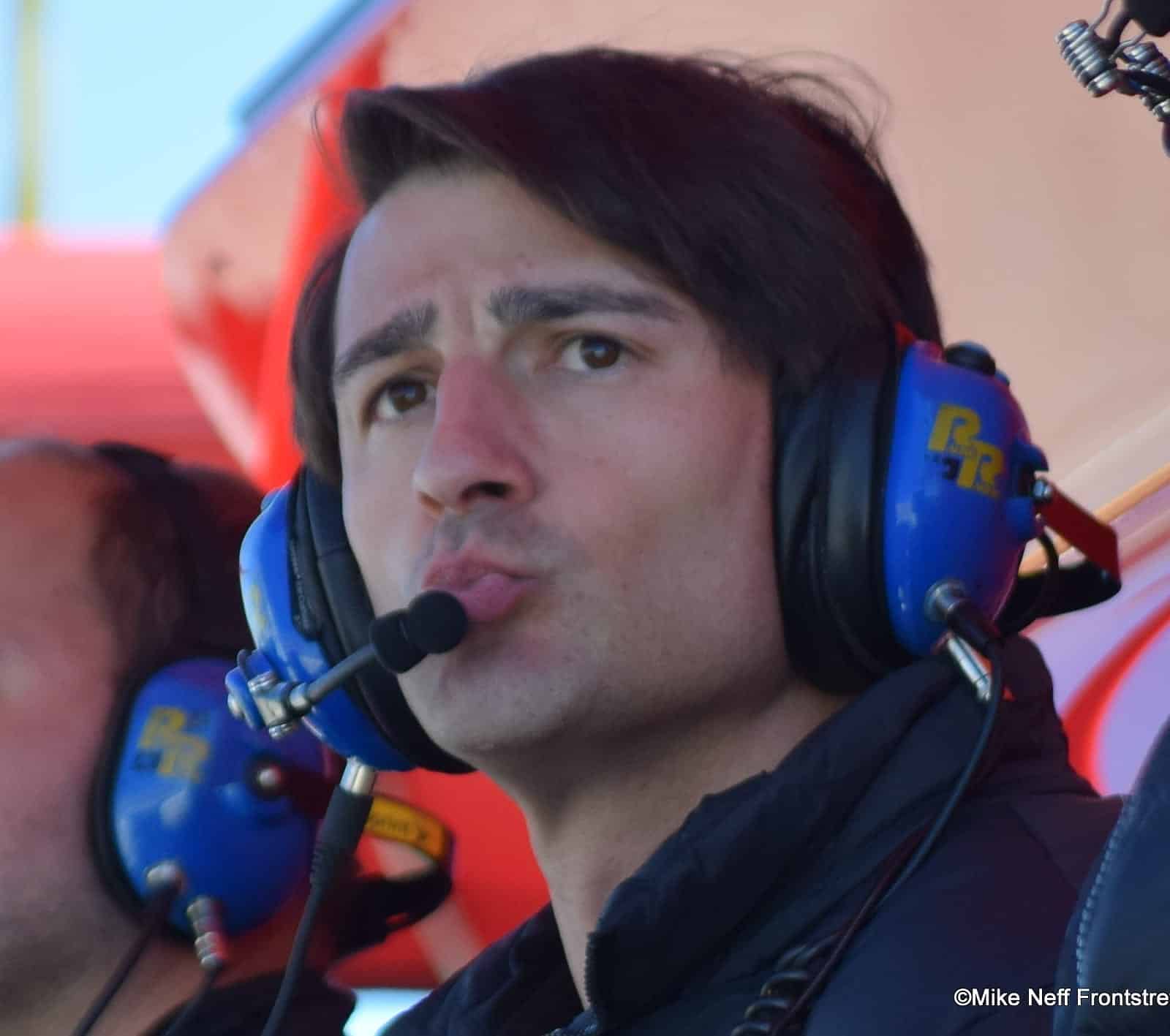 Matt McCall notched his first top 5 of the season with Jamie McMurray at Talladega Superspeedway last weekend, leading his team through repairs from the lone crash they were caught up in and repairing the car successfully enough to compete for the win.

As he and his team prepare to head to Kansas Speedway, he is getting back into the mindset of low downforce on an intermediate track.

This week, among other topics, McCall touches on the topic of rolling wrecks returning to the track, especially when double digit laps down, and also speaks to how different the car is from the one his team ran at Atlanta Motor Speedway the second weekend of the year and the balance that needs to be maintained to achieve maximum downforce no matter the aero package.

Mike Neff – Talladega was an interesting weekend as usual. You got your first top 5 of the year. How do you diagnose your weekend?

Matt McCall – Obviously, with the results, if you can leave there with a decent finish you need to be pretty happy. It was obviously a crazy race. With the weather conditions looking like it was going to rain, and then ultimately getting the whole race in, it increased the intensity of everyone out there. It was more of a wreckfest than normal. I would say it was still a pretty decent race as to how people were approaching it I believe. We can’t complain. We were fortunate to only get into one crash and got the damage somewhat fixed and got a decent finish out of it.

Neff – Speaking of damage, there was a Twitter discussion this weekend about cars that are double-digit laps down coming back out on the track. Do you feel like it is a good idea, is it just a pride thing or would you rather see them tell the teams to pack it up and just come back and try next weekend?

McCall – Well, unfortunately, you can’t. If you haven’t won a race you have to chase every point you can. If you crash early and you’re running 36th or 38th and there are more laps left in the race than you need to make up on a guy that crashed 10 laps after you, I think you’re forced to do that. I think, especially at Talladega, they aren’t quite in the way, but at other tracks it becomes an issue with them being in the way, even at minimum speed. Although I think you’re forced to do that if you haven’t won a race because everyone is trying to collect as many points as they can.

Neff – That is where the other angle of that discussion came in. If NASCAR adjusted the point system so that everyone after 20th got the same points, do you think that would reduce the number of people who would return to the track?

McCall – It may, but I think you’re looking like you’re giving up. That is admitting you can’t win, and that is very hard to do for people who race every weekend (laughs).

Neff – We saw three different cars get off of the ground, mostly just due to the fact that you’re going as fast as you are at Talladega. Are teams still working to improve things like the roof flap and the hood vents to keep these cars on the ground when they get turned around backward?

McCall – It is the same rules it has been. As the intensity of the drivers increases, it causes more of that. You obviously have the potential of rolling over every week, but with the speeds and being that close, along with so much more track to slide across before you impact anything it just helps allow that to happen.

Neff – Now we go to the heartland of America for an intermediate race for the first time in a couple of weeks. We’re 10 races into the season, with eight of them that have had the new aero package. How different is the car you are taking to Kansas vs. the one you took to Atlanta at the beginning of the year?

McCall – It is pretty different for sure. It is just an evolution of trying to increase your performance. Trying to figure out what you missed it on or what you had right. Obviously the car we’re taking this weekend is drastically different from the one we took to Atlanta.

McCall – The attitude control isn’t a ton different; the starting point is just lower. It is pretty amazing the amount of control you can maintain. You can keep the splitter really close to the earth and just barely hit it a little bit or not hit it at all. We have some pretty cool tools to work with for the weeks ahead to maximize our potential there.

Neff – We are at a low-downforce track this weekend where you are trying to maximize speed while still controlling the car. How much are you working to get the spoiler in the air for downforce on the back of the car vs. getting it out of the air to reduce drag and maximize the speed?

McCall – There is some downforce change but it is more about the splitter and the side skirts being sealed as much as anything. Anytime you start unsealing side skirts, for the most part, you start losing total downforce. Normally that is your determining factor where you run the rear of the car, unless there is something crazy with tires and you have to run a different center of gravity to maximize the potential of the tire.

Neff – Kansas is pretty flat with no windbreak until you get to the Rockies. Do you have to battle the wind in Kansas as opposed to some of the other intermediate tracks we go to?

McCall – Sure, you get a little bit of that out there, and more inconsistency for sure. However it isn’t like you can set your car up to have a different angle of wind in one corner over the other. Obviously if you try to do that and you get a change then you are defeating the purpose. There is a little bit of effort put in there so that you don’t get a huge difference, especially if you start getting driver comments that don’t add up. You need to understand whether or not that’s going on. As long as the wind is consistent it is pretty easy to work around.

Neff – There’s been a lot of discussion this past week about the rule changing back to five lug nuts being required. The impetus seemed to be from driver complaints about safety. How much do you think that was legitimately about safety and how much was it actually about the teams who were performing better with four lug nuts and the teams being outdone trying to re-level the playing field?

McCall – It is hard to say. I don’t know how it has suddenly become a safety issue for drivers when we’ve done it for a little over a year and a quarter. It could be based on performance, but guys who are fast hitting four are still going to be fast hitting five. It seemed like the TV broadcast brought it up more and more and that created more questions which made it feel like it was unsafe. Having five lugs is just back to normal I guess. The way they implemented the rule is a little different to me. You mandate it yourself (laughs) so you have to put a lot of faith in your pit crew guys and the cameras and stuff to review to make sure you have five lugs on there.

Neff – We hear a lot about how rookies perform differently when they go back to a race track for a second time. This is your second year being a full-time crew chief. How much different it is for you going to all of these tracks the second year around as opposed to going around the first time as a crew chief?

McCall – I think you have more details you try and look at. Before you would go off of your experience you had at the track in your other roles. Now that you’ve experienced the crew chief side, any notes that you took last year you’ll make sure you try and address them any way possible. Obviously, with the changing of the packages and the tires there are a lot of unknowns. Usually some trends stay consistent so you want to make sure you don’t miss those.

Neff – Some guys had trouble getting into their pit boxes because of the cars pitting around them and where competitors were positioned coming into the pits. When you are on the box, you typically get control of Jamie from 10 boxes away. Is there even enough time, at that point, to let him know who in front of him and behind him is pitting around you, or is that up to his spotter to give him that knowledge before he gets anywhere close to you?

McCall – Most of the time I look for the spotter to, hopefully down the backstretch, to give an idea, if it is on a yellow flag stop, of what is going on. The green flag stops are more on the fly. You try and work with the people around you as much as you can, and scan some of those cars to get an idea of when they’re going to pit. You know, all of that stuff changes last second but you try to give him as much information as far ahead as possible.

Is this person a man or a woman? Just wondering.