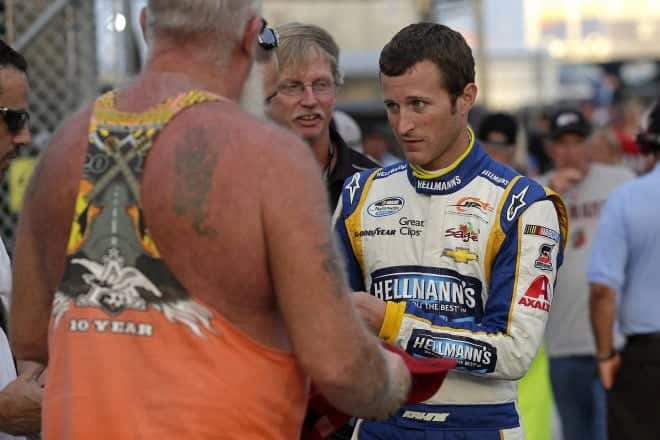 It could’ve been worse. After Kyle Busch’s second tire failure of the day at Bristol Motor Speedway on Sunday, he made his way behind the wall, clipping a race fan as he came to a stop.

The fan, Erin Vandyke, was checked out at a local hospital and was okay, but the incident set off a flurry of social media activity blaming Busch, blaming Vandyke, blaming millennials even – for not paying enough attention to what was going on in the garage area.

It’s easy to assign blame to either party – perhaps Busch should have slowed down when he saw Vandyke, but could he maneuver the car with the damage he’d sustained? Perhaps Vandyke should have stayed behind the rope barrier meant to keep fans out of the way of crew members and race cars, but did she expect a car to come through the pits at that exact moment?

NASCAR made this statement following the race: “[W]e will look at it to see if there’s anything we can do from a security perspective. We always reiterate to anyone that’s in the garage to be alert. This is a live race that’s going on. It was roped off. And thankfully, she was OK. As with any incident, we’ll go ahead and take a look and see what we can improve upon.”

This raises the question, then, should tracks (and by extension, NASCAR) provide hot passes to fans?

THE SAD BUT NECESSARY TRUTH: HOT PASSES FOR FANS MUST GO

Ms. Vandyke is a very lucky woman. The fact that we’re able to have this discussion after a minor hit and not a more serious incident is a blessing.

But we mustn’t use the lack of injury to gloss over the fact that the garage is a very dangerous place. Things happen during practices and races, and fans need to keep themselves apprised of the action going on around them. The accident this past weekend is a perfect example. Vandyke passed under a rope barrier and had her back turned to the lane when Busch came through. Some are even arguing that she was extending her phone outward to take a selfie – it certainly looks as though that is what was happening but we can’t say for certain.

Her negligence got her hit. She posted to Facebook after the race that she was in a “safe area” of the garage, but I disagree strongly. There’s no such thing as a safe area while the track is hot. Too much is not under control and freak accidents happen. Mark Martin ended up driving through the infield at Talladega in the 90s and the infield is supposedly a safe area too. For anyone to think a hot racetrack is safe isn’t being very realistic.

Fans must be completely focused on what’s going on around them or they shouldn’t have hot passes. And with the proliferation of smart phones, messaging apps, the obligatory selfie – fans just don’t pay attention anymore (see: declining television ratings). Or they do and they try to get even closer to the action. That is where accidents happen.

When I started working at New Hampshire Motor Speedway a couple of years back, one of the first pieces of advice I was given came during my first foray into the garage area during practice: stay out of the way. I was – as are fans – a guest in the garage area. But just staying behind the white painted line on the ground wasn’t enough. The next piece of advice I received, as I walked towards Jeff Gordon’s stall, was to move back even farther. “He likes to swing wide,” I was told. Sure enough, Gordon cut over the line.

That is why fans shouldn’t receive hot passes. Too much isn’t under control, and most fans don’t think about the waivers they’re signing when they hit the credential office. They just want that exclusive access without realizing things could go south fast. The access that NASCAR gives fans is unprecedented, and even with banning hot passes can fans get close to the action. Pre-race pit passes, frontstretch access to concerts, etc. are all ways that fans can get near their favorite drivers.

It’s a sad reality, but it’s in the fans’ best interest. You get a better view of the race from the stands anyway.

One of the biggest appeals of NASCAR is that the series allows its fans more access to their favorite drivers and teams than nearly any other sport. Based on that notion, for NASCAR to remove the potential of hot passes for its fans would be nothing short of foolish.

What happened on Sunday was frightening. The biggest fear in the garage area is always that someone will get hit by a car or piece of debris, and those fears came to life at Bristol in a big way. Thankfully, the incident wasn’t as bad as it could have been.

That said, it seems silly to rob a potential experience of a lifetime for hundreds of thousands of future fans because of the mistakes of one.

Taking away hot passes altogether isn’t the answer. The real issue lies with awareness and opportunity to get hit.

A glance at the issue that occurred on Sunday will show that the spectator that was hit was by herself, in the middle of the lane that Busch was attempting to navigate through. With the caution flag out, and the field slowed, everyone in the infield should have known to watch for cars potentially coming to the garage. Somewhere along the way, whether the spectator was on her phone, listening to something, or merely zoned out, her awareness clearly dipped.

In this scenario in the future, this needs to be prevented. The easiest way to do that is to save these people from themselves with stricter guidelines and have personnel there to assist them.

I don’t know all of the answers to fix this issue. I’m not sure anyone does. I just know that one freak incident shouldn’t be enough to steal a precious future memory from some of the sport’s biggest fans.

I am not on the 100% side of Kyle story. With that being said, separate from this incident. I feel NASCAR has gone overboard with the “fan experience” for a price of course. It is a good idea, up close and all, fans for a price no longer just go to the stands. But from a drivers point of view (and I am not referring to the Kyle BS) these guys are at their job, the way inconsiderate fans hound them, it seems fans look at these guys like they are throwing the 25 cent gumball machine type turds to the geese in the pond and are due their attention from them. Or are waiting in line to pet the dolphin. These people go overboard in a lot of ways of hounding these drivers. NASCAR has for years, IMO let the fan experience be more deserving than it should be. If they toned it down a bit, it would still be far and away the most fan accessible sport around, at the athletes expense of course.

kb can’t table his hatred for Kyle Busch even when the evidence shows the moron backing into Kyle’s path for the SOLE PURPOSE of taking a selfie showing a driver she admits to despising bringing his wrecked car to the garage. I am quite sure kb would have done the same. Haters are many things, but geniuses they are not!

Seems if we go back to the “old days”, the week of the race event, you could go to a dealership of the brand car your favorite driver participated in. Not only could you get an autograph and take pictures with both the car and driver, you might get a deal on new wheels. It was a way to introduce your family to the sport, but now it’s a show car unloaded by a truck driver available for viewing between 1-3 pm.

I do miss these days. I can remember once during the week of the Brickyard 400 when a local dealership had model cars for both Dale Earnhardt and Mike Skinner. Childhood me was never more excited to head to my local small town.

You know what, if you get a hot pass, then it is your responsibility to pay attention in the garage area. It’s a privilege, not a right. Pedestrians there don’t have right of way. Once upon a time, people used to be aware of their surroundings but now everyone needs to be protected.

kb, I agree that NASCAR has gone overboard with it or the tracks have because it is another way to upcharge the fans. Plus as you say, the respect for the working environment of the teams/drivers has gone out of the way.

Its sad that this fan created this issue by being some what clueless of the surroundings, but when we have been to Cup events & Xfinity I have always seen track workers(not Nascar officials) very attentive of the fans movement & drivers actions during yellows etc…I am only guessing but the just out of school generation(sean fesko) wanting to eliminate it instantly is very short sighted when this is correctable..It sure would reduce my chances of buying his “book” with all his abundant knowledge of Nascar knowing this…There seem to be to many writers(in particular at frontstretch) where its oh just about to or have graduated & they instantly are authoritative experts (& they work cheap) & expound all their expert opinions as to how we should perceive Nascar…Just an opinion

You’re not wrong, Earner. A lot of us are college-age people, following our passion and writing about the sport we love. I’ve been watching racing since I was 3 years old, but I know many writers and viewers here have many more years of experience with the sport than even that. All I can do is write my opinion and stick by it.

That said, I don’t ever proclaim myself as an expert. I’m just writing about a sport that’s been my entire life since I was in diapers. I’m certainly not always right with my opinion – I presume that most readers probably disagree with me more often than not – but if I don’t write and get my take out there, I can’t learn and grow. I thank all of you that take the time to read the things I write, and sincerely appreciate the comments that help me learn more about the sport and myself as a writer.

I understand she is now considering litigation. Another millennial slacker

some people never pass up an opportunity for a big payout – even when they are at fault.

By all means! She could not see or HEAR that Kyle was approaching? As far as litigation…….her pipe dream. DC hot passes, please.