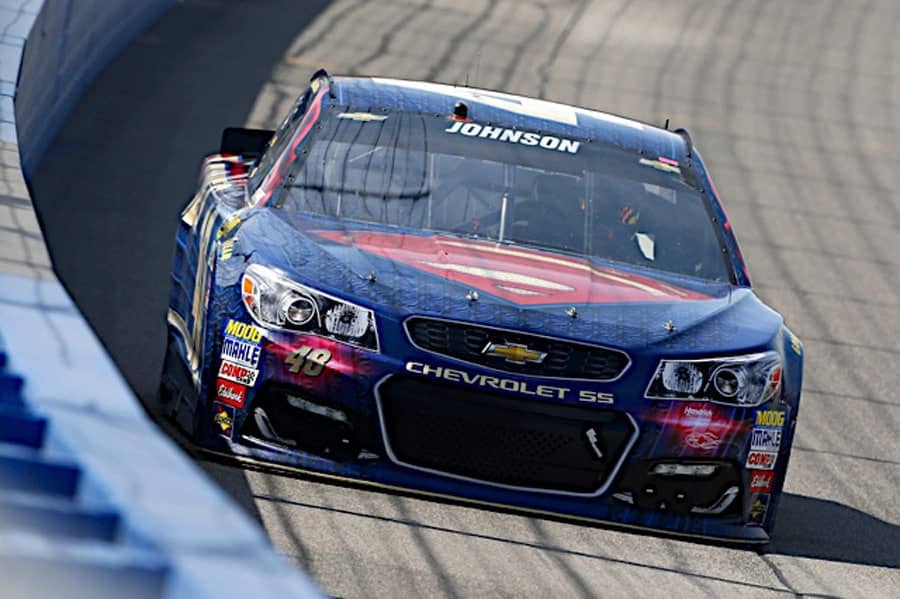 With the triumph, Johnson has officially scored multiple victories in each of his 15 Cup seasons. Courtesy of his Superman car, he’s also now won twice when sponsoring movies. Anyone remember the rainbow Madagascar wig?

Johnson’s victory propelled him to the top of the Chase grid if the playoffs were to start today, but was it enough to unseat the two-headed monster of Kevin Harvick and Kyle Busch at the top of the Frontstretch Power Rankings?

“It’s rather weird how you grow up and hear about all of these legends’ accomplishments and you think ‘nobody’s ever going to touch those stats,’ yet here we are experiencing history with Jimmie Johnson. Crazy.” – Kyle Pokrefky, The Fourth Turn

“24 races with the most laps led and only eight wins. No wonder Captain America (Keelan) is upset.” – Aaron Bearden, Frontstretch

“Second again. I think the panel for The 10 should consistently place Happy in this spot” – Sean Fesko, Frontstretch

“For a while there, it looked like we were going to have a repeat of Phoenix.” – Summer Bedgood, Frontstretch

“HE HAD A SUBWAY PAINT SCHEME ON SUNDAY. IT INSPIRED ME TO EAT AT SUBWAY TODAY.” – @AnnoyingRaceFan

“I MISSED HIS POST-RACE INTERVIEW AFTER THE XFINITY RACE ON SATURDAY. ANYONE HAVE AN IDEA WHAT HE SAID?” – @AnnoyingRaceFan
“The only thing ‘fixed’ in NASCAR is how well Johnny Benson runs at Indianapolis Motor Speedway in NASCAR ’99 for the Playstation. That Cheerios car flew, man…” – Bearden

“Two straight third-place efforts. The No. 11 team has rebounded after having poor finishes at Atlanta and Vegas.” – Dustin Albino, Frontstretch

“I DEFER TO COLE PEARN.” – @AnnoyingRaceFan

“Still making competitors upset, but the speed is there to win a race very soon, possibly Martinsville. Should have won at the paperclip in the fall. We know what happened there.” – Albino

“He may have been driven to a string of curses because of the debris caution during green flag stops, but he really doesn’t have much to worry about in Cup right now.” – Phil Allaway, Frontstretch

“Something tells me Batman wishes he could go back to beating Bane – …Tony Stewart in 2012, maybe? –  after the beatdown Superman just gave him. Still, 11th wasn’t bad after the day Junebug had” – Bearden

“A ninth-place finish was okay for Keselowski, but I think a lot of people expected Keselowski to carry some momentum these past two weeks after winning Las Vegas.” – Bedgood

“Elliott’s finishes aren’t indicative of the speed he has shown in his rookie campaign. Delving into the loop data statistics, Elliott ranks second in the “Fastest Drivers Late in a Run” category and third in “Green Flag Speed.” – Eberly
“Chase has three top-10 finishes this season, which is one more than Jeff Gordon had at this point last season” – Fesko

“One bad race can’t hurt this team too much. He had four top 10s to start the year off.” – Albino

“A woeful day at the office on Sunday sends the 2004 champion sliding way down my rankings list.” – Pokrefky

One driver earned his first top 5 in nearly a year.

How they’re made: Following the conclusion of each NASCAR Sprint Cup Series race, members of a voting panel including Frontstretch writers, members of accredited media including Motorsport, NASCAR and USA Today, as well as writers from other sites and social media favorites, submit their top 10 drivers for the Power Rankings. The drivers are then given points based off their position, with first place getting 10 points, and each subsequent driver getting one few point until the 10th-place driver, who gets a lone point. Points are then tallied, and the rankings are created.

Do you agree with our rankings? Think someone got snubbed, or that one of the top drivers is overrated? Let us know in the comments, and tell us who raced their way into your top 10.

Good grief the promo continues, the guy races…he races, he races..and he is a bad guy. Everybody else is a poor victim..yawn. Do you guys maybe want to dig a little deeper than this BS or look deeper to see how you are wrong? I know, I know too much work. I am sure there is lots and lots of stuff you can uncover for a fan, if you actually worked a little at your job. We all are always eager to learn new things we do not have access to.