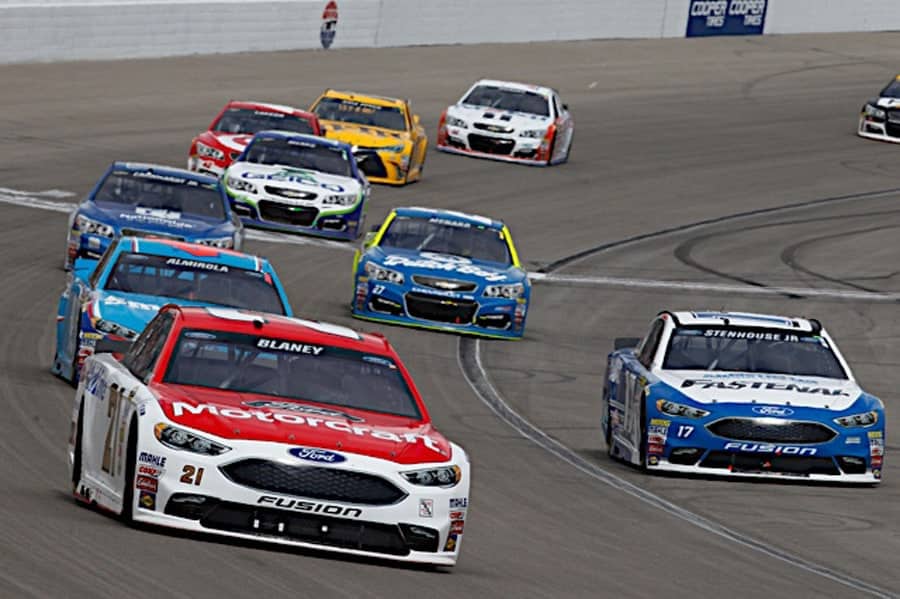 Elliott rose as high as fifth throughout the day’s proceedings, running inside of the top 10 for the majority of the 400-mile event. Unfortunately, the result wouldn’t follow for the Dawsonville driver. Poor luck in the pits stuck Elliott back in the pack late, leaving him stuck with nowhere to go as Matt Kenseth spun late in the race. Elliott plowed into Kenseth’s No. 20, totaling his No. 24 Chevrolet and ending his race early.

While Elliott’s luck turned sour, Blaney brought the Wood Brothers one of their best intermediate races in recent history. After qualifying 14th, he slowly rose throughout the 400-mile event, with the steady performance ultimately culminating in a sixth-place result for the No. 21 Ford. The finish has Blaney sitting inside of the top 15 in Sprint Cup points after three events. If both Blaney and Elliott can continue to maintain this level of execution, the Rookie of the Year battle may continue on with both drivers into the Chase for the Sprint Cup. – Aaron Bearden

XFINITY: Daniel Suarez Takes Historic Points Lead With Second-Place Result – “That’s all I had there at the end,” said Kyle Busch, discussing his difficulty holding off a hard-charging Daniel Suarez for the race win at Las Vegas Motor Speedway.
Despite falling short of catching Busch for his first-career NASCAR XFINITY Series win, Suarez’s second-place result landed him another landmark accomplishment – the series points lead. With Elliott Sadler finishing just outside of the top five, Suarez surged into a three-point advantage in the series standings, making him the first person born outside of the United States to hold the points lead in the XFINITY Series.
While this is Suarez’s first race leading the championship standings, it might not be his last. The native of Monterrey, Mexico had proven to be consistent to start the year, finishing eighth or better in each of his first three starts. His biggest competition may come from teammate Erik Jones, who rallied from two laps down to finish third on Saturday night. – Aaron Bearden

IndyCar: Field Gears Up for 2016 Season – After a seven-month wait, the 2016 Verizon IndyCar Series is finally upon us.

This weekend, IndyCar will return for their season-opening Grand Prix of St. Petersburg in St. Petersburg, Florida. With the series’ return comes a cast of face, both old and new.

With a breadth of new talent and returning faces such as James Hinchcliffe and Mikhail Aleshin, the 2016 IndyCar Series season promises to be full of great competition, including the 100th Running of the Indianapolis 500 in May. Fans can catch the first round  of the 2016 season on March 13 at 12:30 p.m. ET on ABC. – Aaron Bearden

Sports Cars: Patrick Long Has Highest of Highs, Lowest of Lows at COTA; Kenny Bupp Makes Trans-Am History at Sebring – Last weekend was the season opener for Pirelli World Challenge at Circuit of the Americas.  A full 103 cars were entered between the seven classes and six races were held over the weekend. In the headlining GT class, it was the debut race in the series for the new Porsche 911 GT3-R.
Patrick Long, driving the No. 31 Porsche for EFFORT Racing, won the pole for the first 50-minute race on Saturday, only to lose the lead at the first corner to Always Evolving Racing’s Bryan Heitkotter, who made an excellent move on the outside from sixth to take the lead. From there, Heitkotter and Long pulled away from the field to settle the race by themselves. On Lap 18 of 23, Long made a somewhat controversial move to the inside in Turn 14 to retake the lead. The move was controversial because it appeared that Long was very close to being inside of the painted curb.
From there, Long was able to pull away to take the win in his first Pirelli World Challenge start since 2012. It was the maiden victory worldwide for the new Porsche 911 GT3-R.
Sunday was the complete opposite. Long started the No. 31 Porsche second in Race No. 2 by virtue of turning in the second fastest race lap on Saturday. Here, his day didn’t even last to Turn 1. Just past pit out, Long was hit from behind by part-time Verizon IndyCar Series racer James Davison, Heitkotter’s teammate. Long spun and hit the Armco Barrier head-on, heavily damaging the Porsche. Long walked away from the crash, but his day was over. EFFORT Racing is now in a scramble to fix the Porsche ahead of the next round, which is this weekend in St. Petersburg on the under card of the Verizon IndyCar Series’ season opener. On-track activity begins on Thursday.
Meanwhile, Trans-Am held its season opener last weekend at Sebring International Raceway. Over 70 cars in five classes took to the track in two separate races. The race for the TA, TA3, TA4 and TA5 classes saw a litany of wrecks, flat tires and mechanical failure afflict many of the front-runners. When the dust cleared, it was Kenny Bupp who emerged victorious in his more than ten year old Chevrolet Camaro for his first career win. Bupp is 79 years old, the oldest racer to win in Trans-Am’s 50-year history.
The standalone race for TA2, which had 35 starters, was won from the pole by defending class champion Gar Robinson. However, the run of the day came from Tommy Archer, who missed the cutoff to get to the grid and had to start from the pit lane. From there, he drove from the rear to second before mechanical issues dropped him to an 11th-place finish. – Phil Allaway

Lemmons got the better end of controversial contact with Myatt Snider to claim the 51st season opener at Caraway Speedway. The win came over 16 other NASCAR Late Model Stock Cars in a 150-lap race that allowed for live pitstops at the .455-mile oval.

Racing for the lead on a late restart, Snider was running outside of Lemmons when the two drivers made contact in the first turn, sending Snider around and prompting another yellow. Lemmons would go on to inherit the lead on the following restart and drive off for the victory over second-place Bradley McCaskill. – Aaron Bearden

Good to see a mention of the TransAm series. This series has had a major turnaround over the last several years and offers some of the most exciting road racing in the country. Kenny Bupp’s first TransAm win was extremely popular and well deserved.

What’s in a name? Not much when it pertains to race results, but don’t argue that fact with media pontiffs, ha! After Vegas Ryan is P14 (73 pts, -43 behind leader) & Chase is P28 (41, -75) in points. Despite the #21 decisively out performing #24 & accumulating nearly double the amount of points in a mere 3 races, the “Elliot” & Gordon” media hoop-la dictates Chase gets 10X the ink Blaney does? Pfft!
NXS race was a disgrace! Exhibitionists stinking up the show again! I watched ladies ice curling & found it way more entertaining than this snooze-fest & that’s no joke! So happy we have a NXS “Chase” gimmick & that it puts new emphasis on NXS drivers learning about farcical Nascar “Chases” & Nascar can teach them how to win, lol. Obtw, how many NXS drivers have clinched chase births?
No live Trans Am or Pirelli World Challenge TV or streams. Imo, the design intent of Nascar monopolizing motorsports broadcasting in this country. Another is that Focks has no fewer than 8 full time basic cable channels (3 strictly for sports), PLUS Focks Sports currently owns rights & broadcasts all Australian V8 Supercar events in Australia! Yet they do NOT toggle a few switches & broadcast one of the greatest motorsports series in the world in the USA?!? There-in, Nascar’s broadcast partners are actually in the business of BLOCKING (not Broadcasting) motorsports in their USA market & opt to run ladies soccer re-airs & inane documentary reruns in the middle of the night, when these Australian races would/could/should air LIVE in the USA! As NCIS’s Gibbs would say, I do not believe in coincidences. I don’t know how, but this is Nascar’s fault!