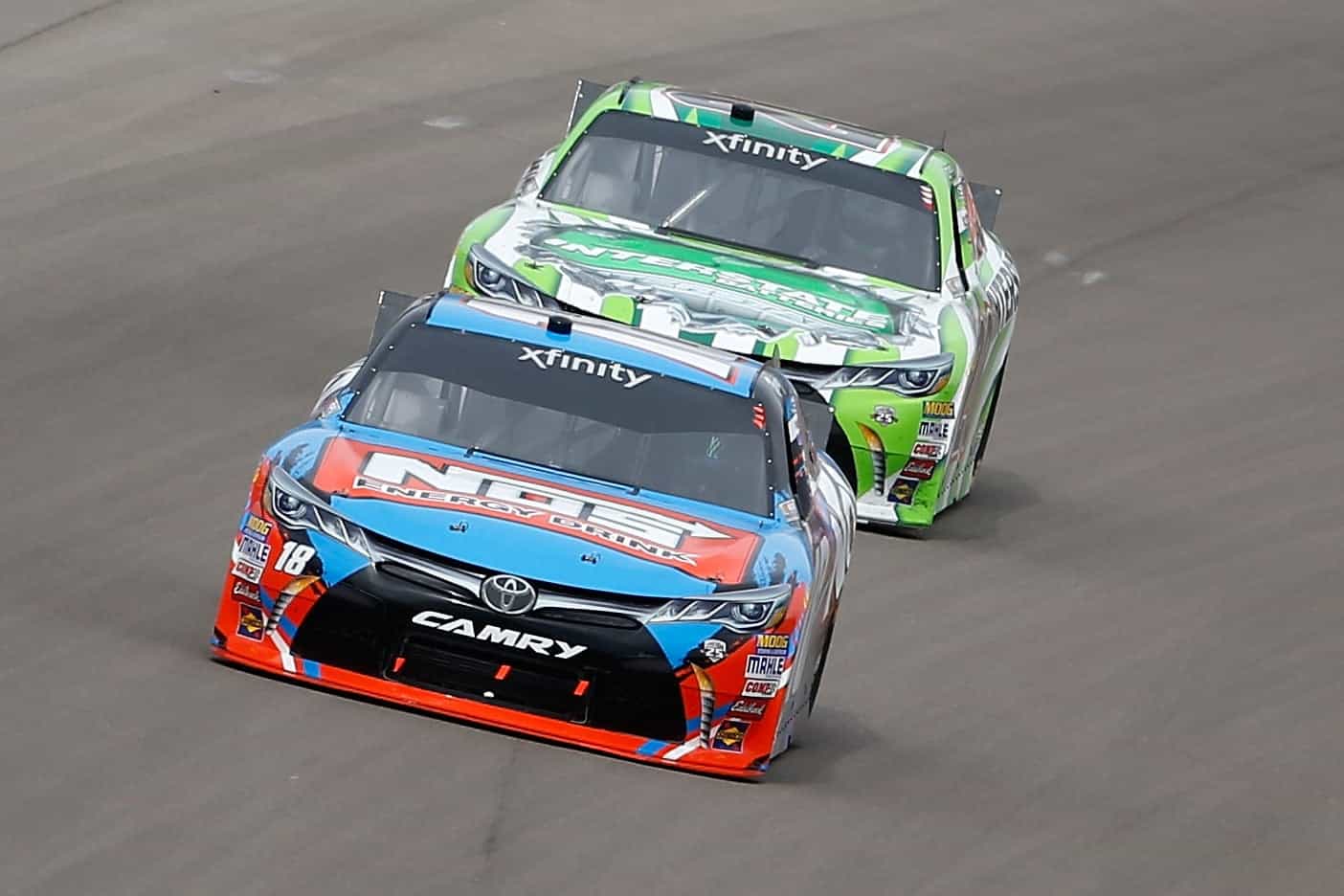 For the NASCAR XFINITY Series’ winningest driver, reaching milestones is par for the course.

However, winning on his home track was a brand new experience.

Kyle Busch led a race record 199 of 200 laps to claim a dominant victory in Saturday’s Boyd Gaming 300 at Las Vegas Motor Speedway. The win was the Nevada native’s first in the series at his home track, increasing his series record win total to 78 victories since 2004.

The day was one of milestones for the defending NASCAR Sprint Cup Series champion. Busch claimed his 50th-career Coors Light Pole Award to begin the day. He led his 16,000th lap just past the halfway point of the event, passing Mark Martin’s track record 377 laps led in the process.

Busch benefitted largely from long green flag runs throughout the event, stretching his lead to as many as 12 seconds as he gapped the field.

The race’s first yellow would fall on lap one, as Corey LaJoie was sent spinning through the infield off of the nose of Jeb Burton’s machine after bouncing off of Ryan Preece.

Following that early incident, the field roared back to the green-flag on lap seven.

They wouldn’t see another caution until lap 71.

Under the green, Busch quickly established himself as the man to beat. Save for a brief challenge from Erik Jones, Busch drove with little challenge, lapping the majority of the NXS field in the process. By the time the caution had fallen on lap 71, only 10 cars remaining on the lead lap.

With a 70-lap green-flag run came a round of green-flag pit stops. It was during that moment that Busch’s biggest competition suffered issues.

For the second-straight week, Jones qualified alongside Busch to complete the front row for Joe Gibbs Racing.

Unfortunately, Jones would also find himself overcoming issues for the second-straight week.

While he didn’t beat Busch to the start-finish line at the start of the race, as he had to force a penalty at Atlanta Motor Speedway, Jones found himself penalized after his pit stop for speeding. When Jones came to serve his penalty, he was busted again.  Issues with his tachometer left the rookie two laps down shortly before halfway.

Jones would take the wave around when a lost tire in the infield from Derek White’s pit crew forced a yellow on lap 71.  65 laps later, Jones would get back to the lead lap.

Underfunded driver Cody Ware was riding on the outside lane on lap 136 when he lost control of his No. 25 machine, spinning into the inside wall and sliding down the track. The incident was typical for the 1.50-mile circuit, but when the caution flag was late to come out, a slew of drivers found themselves attempting to avoid the machine.

Bubba Wallace and Justin Marks were battling for position back in the pack when they came up to Ware’s stalled No. 25. Wallace spotted Ware’s machine too late, sliding his No. 6 into Ware’s machine, peeling the rear end off of his Ford and sending him spinning up the track. Behind Wallace, a late reaction from Marks sent his No. 42 into the outside wall. The two drivers would both hit the wall before making contact with each other, scattering debris all over the racing surface and forcing a red flag.

All three drivers were released from the infield care center without issue.

The third yellow would prove to be the race’s last. It would also set Joe Gibbs Racing up for a stellar finish.

Busch quickly surged ahead of Chase Elliott on the ensuing restart, never to be challenged again.

Behind Busch, teammates Daniel Suarez and Jones battled their way through the field to take second in third for JGR, besting the rest of the field by over 12 seconds.

In an uncharacteristic day, Brad Keselowski and Team Penske struggled at the 1.5-mile Las Vegas. After pitting for a vibration early in the race, Keselowski would struggle to a 15th-place result, three laps down.

While their biggest rival struggled, Busch and JGR seized the day.

The NASCAR XFINITY Series will return to action on Mar. 12 for the Axalta Faster. Tougher. Brighter. 200 at Phoenix International Raceway.

In related news, I really schooled my 9 year old in Jeopardy last night.

The “winningest driver in the Xfinity series”. Lol. Because he runs consistently more races in the lower series than any other Cupper. It is not rocket science, nor a truly great feat, despite what the suck up media keeps telling us. Adding insult to injury they instituted the lame Chase in this series with other series drivers participating. Trucks as well. SMH.

Why don’t Kyle Busch just step down and run all 33 races in the XFINITY Series he would probably win them all. He has nothing to prove in that series, we know he can dominate in those races and it makes them XFINITY
races hard to watch. VERY BORING RACES….. Led 199 out of 200 Laps Very Ridiculous ………..

Everyone knows those Cup drivers are what fills those seats on Saturdays. After all, had Kyle not been in the race there may only have been 49 folks in the stands instead of 50.

Are you counting the spotters?

The fact that Aaron can write “winningest driver in the Xfinity series” without questioning absurdity of that statement I find troubling.

Just stating the fact, Chris. I never said I agree with it.

And you sure didn’t say that you disagreed with it either.

Unwatchable. Nascar has managed to completely ruin this division.

It’s a little harder in Cup. Gotta win where you can. Keep robbing to feed the ego.