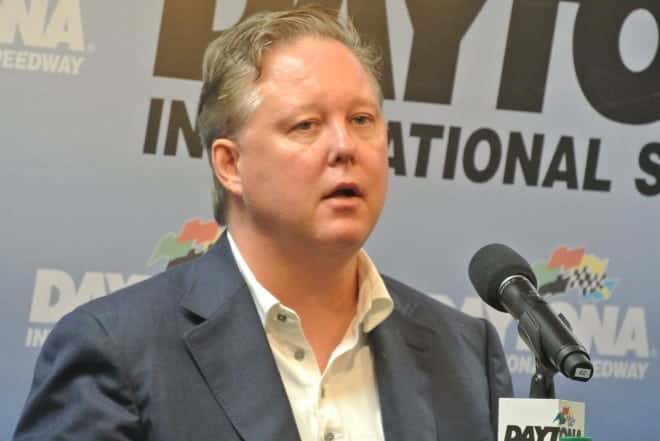 In an emails obtained by Motorsport.com, France promised that NASCAR would stay “a model of a progressive organization.” The CEO and Trump have been close personal friends for more than 20 years.

“I made the personal decision on Monday to announce my support of Donald Trump,” France wrote in the email. “I have known Donald and his family for many years, and it is through this connection that I offered my support.”

On Monday night, NASCAR stars Ryan Newman, David Ragan, Chase Elliott and NASCAR hall of famer Bill Elliott stood behind France as he appeared at a Trump rally in Valdosta, Ga., just over 200 miles from Atlanta Motor Speedway, where the 500-mile NASCAR Sprint Cup Series race was held on Sunday. Trump appeared on stage in front of a national audience to promote the Super Tuesday primaries and caucuses, during which he won seven states.

The endorsement surprised many due to the series’ decision to move from the Trump National Doral Miami, which was the home to the XFINITY and Camping World Truck series’ banquets the night after the season finale in November. The decision was made following comments the candidate made concerning illegal immigrants.

In the email, France said the following:

“I was not able to attend the Town Hall meeting yesterday, so I wanted to send a note to the NASCAR team.

As many of you know, I often have been involved in supporting political candidates running for public office.  Elections are an important part of our country’s democratic system, and I truly believe that being involved is an important role for every citizen.

Looking ahead at the presidential election in November, I made the personal decision on Monday to announce my support of Donald Trump.  I have known Donald and his family for many years, and it is through this connection that I offered my support.  Needless to say, with any candidate that one may endorse, there are many positions or policies that run counter to your beliefs, as is the case here with me.  This is my personal and not a corporate position.  However, I still encourage each of you to make your own personal evaluations as our country moves forward in the electoral process.

That said, let me make something perfectly clear:  NASCAR will continue to operate our business unchanged.  This includes our deep, long-standing commitment to diversity and inclusion.  It’s a commitment that I made to this organization more than a decade ago.  We will not waiver from our goal to make our sport more open and friendly to everyone, and we will remain steadfast in our support of key initiatives to grow our fan base and remain a model of a progressive organization.

If you have any questions or concerns, do not hesitate to raise them directly with your supervisor, Officers in our company, or to me directly.”

I wonder if The Donald will endorse Brian when he runs for president?