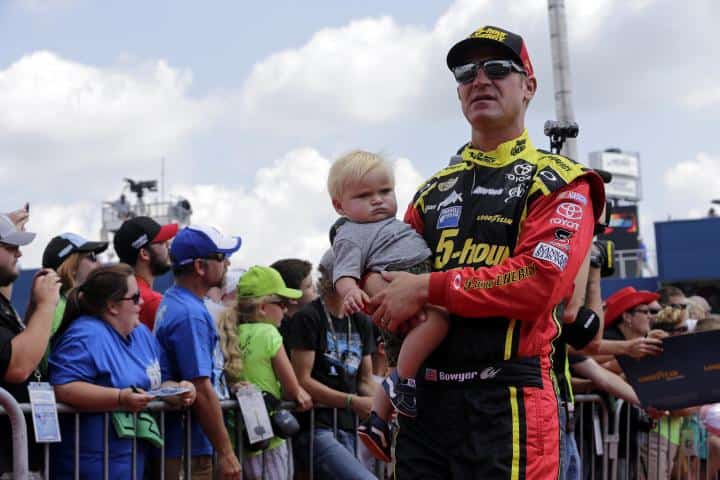 The next piece in Clint Bowyer‘s puzzle has been solved. The speculation turned into reality early Friday afternoon at Dover International Speedway.

“I think Clint will help us long-term because he will help us restart our program and set the bar higher going forward,” Harry Scott Jr., owner of HSM, said during a press conference on Friday. “With his experience and leadership and his enthusiasm, I think will be contagious amongst all of the team members, and I think going forward, he will help us develop an even stronger relationship with Stewart-Haas Racing and that will obviously be beneficial for us.”

5-Hour Energy has not determined what will occur after the 2016 season, stating that there is plenty of time to discuss plans for 2017 and beyond. No car number and crew chief have been determined for Bowyer’s team heading into 2016.

The energy drink brand, which originally partnered with Bowyer when he joined Michael Waltrip Racing in 2012, will be the primary sponsor on the car for 24 events next year. Bowyer was a free agent since the beginning of August after MWR announced it will be shutting down its full-time operation at the completion of 2015.

“I don’t want to leave Harry with nothing at the end of this,” Bowyer said during the press conference. “When I leave there, I want to be able to leave with him having a winning organization and an established team to have his next driver in.

“It could be a downside if you allow it to. It’s going to take hard work, dedication and funding. We have all of these in place at HScott Motorsports. We have ties to Stewart-Haas Racing, and these are the guys that are winning the race and I now have that connection to this kind of equipment. When I look at next season, I think it a lot of fun.”

Scott would not state how many cars the organization would field in 2016, but sophomore driver Michael Annett has been confirmed to return to the seat of the No. 46 Chevrolet with Pilot and Flying J as his sponsor. Teammate Justin Allgaier‘s status is unknown, but Scott had previously said that discussions were on-going to bring the 29-year-old back to the No. 51 car in 2016. However, that was prior to Bowyer becoming a free agent.

I'm sure a lot of you have questions & though I can't answer most of them, here's what I do know…… https://t.co/gZ1DUF7SHX

“I’ve been very fortunate that Brandt and I have been partners for the fifth year now,” Allgaier told Frontsretch in June at Pocono. “It starts at the top. I’ve been really good friends with Rick Brandt, the CEO, but it goes all the way down to the guys that work at the plants and the customers. We call it the ‘Brandt family’ all the time when we are talking about it because it really is like a family aspect.

“Hopefully, my big thing with them is making sure this makes sense for their business model. That is what the ultimate goal is. We need them to get what they need out of the sport, and so far they have. They keep coming along and being involved in it. As long as we can keep doing that, hopefully it will last for a long time.”

Along with announcing Bowyer’s signing, HSM has created a technical alliance with SHR, extending its partnership with Hendrick Motorsports beginning in 2016.

Bowyer’s move marks another Sprint Cup Series winner making the move to a smaller organization before heading over to one that has won championships. Kasey Kahne joined Red Bull Racing at the conclusion of the 2011 season until 2012, entering the HMS stable in the No. 5 car. More recently, Kurt Busch followed in his footsteps, working with Phoenix Racing and Furniture Row Racing in 2012 and 2013.

“I talked to Kasey, and I asked him about this very opportunity and he went through it, landing at a great home,” said Bowyer. “I don’t look at it as oh, ‘fill-in that void.’ I look at it as an opportunity to take advantage of something. When I walked in at MWR, things were hitting all eight cylinders. I see that opportunity with HScott Motorsports. They are ready. They have the people in place and all the pieces of the puzzle.

“They have [Steve] Addington as a winning crew chief steering the ship. I’m looking forward to capitalizing and pouncing on that opportunity.”

Well I think Clint can make a go of it. On the Xfinity side Elliot Sadler AGAIN has landed a ride….Kelley and Rick love One Main Financial, cause I don’t think it is because of the lack of wins or top 5’s Elliot produces. I think he was more productive as a Cup driver. He certainly made the highlight reels with consistency based on his out of this world flips, crashes..etc.. I like Ellliot, he seems like a good guy..but hey. Two very lucky drivers in one week. Miracles are abounding in NASCAR lately…. :)