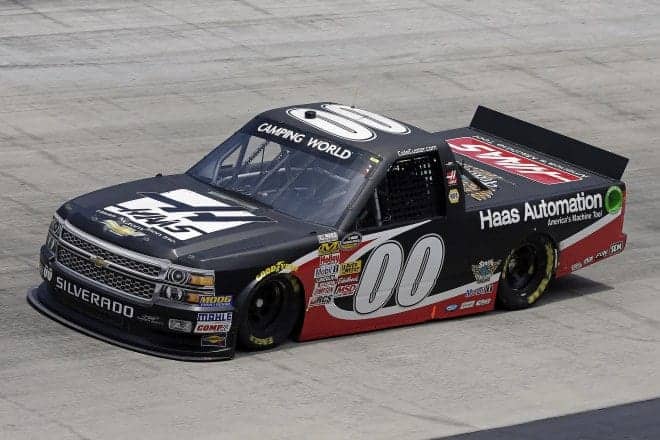 Quick, the drivers with the most laps led in NASCAR Camping World Truck Series competition this year – go.

Obviously Erik Jones has to figure into your guesses, even though he’s only won a single race all season. Aside from his eight top-five finishes, he’s been around the front for much of the year’s races, only to be thwarted by the checkered flag.

Then there’s Matt Crafton, who’s on the other side of the coin, having won four events this year and leading laps in even more, like Wednesday’s race at Bristol Motor Speedway.

OK, so those are the easy ones. How about the third? Points leader Tyler Reddick? Kyle Busch? Ryan Blaney, the most recent race winner?

Yeah, Cole Custer. The same guy who nearly ran away with the race on Wednesday, had it not been for the misfortune of Spencer Gallagher spilling into the driver of the No. 00’s before-then-perfect night. That 17-year-old you keep hearing about. The youngster who isn’t even running the full season.

That’s how it stands: Jones leads with 672 laps led, followed by Crafton with 460 and then Custer’s 199.  The former two are full-time competitors through 14 races, while the latter has competed in only six races all year.

In all, the top 10 in the laps led category consists of five full-timers and five who are running less than the allotted races, some because of other obligations in higher series (Joey Logano, Blaney, Busch) and others simply because they’re either not old enough (Custer) or a little newer to the scene (Christopher Bell). That’s not new; the same was the case in 2014, while 2013 had six full-time drivers in the top 10. The year before, 2012 provided a rare win for the regulars with eight in the top 10, but previous years of the decade were more in line with the usual.

In other words, Custer popping into the top 10 isn’t strange. It only takes one race of domination to even reach that peak most years, evidenced by Logano being there despite only running one race this whole season and leading 150 laps in the process.

Here’s what’s way more interesting: Custer’s on pace to have quite the season indeed in the laps led category despite not even being eligible to run most of the races.

Remember, in the Truck Series, drivers under 18 years old are eligible to race in the series granted the track is either no longer than a mile and a half in length or is a road course. Custer won’t be 18 until January of next year, so until 2016, he’s only showing up when he can, much like Jones, Chase Elliott and John Hunter Nemechek before him.

Since NASCAR reinstated this rule, multiple drivers have broken into the top 10 of laps led in the series, beginning with Elliott in 2013. Then came Jones last season, though bear in mind that his 12 starts were supplemented by the fact that he turned 18 in late May, meaning that his selection of races expanded greatly especially once summer hit. Elliott was 10th in 2013 with an even 100 laps led, while Jones hit 300 last year for third on the list. Custer managed to break into the top 10 last year as well, placing seventh with 150.

So already, Custer has the most in terms of drivers who will remain under 18 years old for the entire season. And he could easily punch up that number as the season goes on.

Not that it’ll be simple. Granted that he’s even entered in all his eligible races, Custer only has Canadian Tire Motorsport Park, New Hampshire Motor Speedway, Martinsville Speedway and Phoenix International Raceway left on his schedule. Meanwhile, drivers like Jones, Crafton and Reddick will run each race and have shots at climbing the ladder – nine in total.

But at the very least, Custer should be able to best his spot of seventh in the laps led running order last season, thereby slotting him into the conversation of some of the series’ best teenagers. And that’s not bad, considering that though he’s won a race this year, he only has one other top 10 in six starts in 2015, perhaps presenting a little underwhelming on paper despite a lot of hype surrounding him.

Bristol on Wednesday is quite the evidence. He led over 100 laps but couldn’t finish the deal, something that’s affected a championship contender in Jones this season. Even if 2015 ends up looking like a dud in the win, top-five and top-10 category for the youngster, just checking out how many laps he’s led indicates something more: he’s there at the front, and once he figures out how to stay there, watch out.

Can you tell what truck teams use cup pit crews.