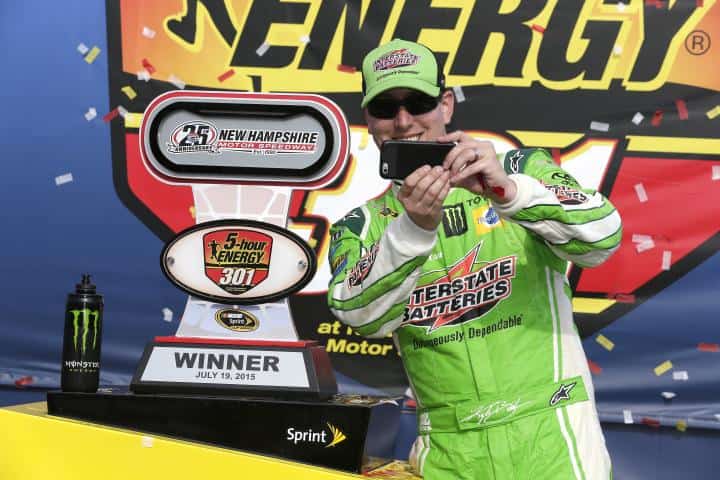 The ‘Magic Mile’ of New Hampshire Motor Speedway was no trick for Kyle Busch, as the Joe Gibbs Racing driver took off with the race lead on a restart with 44 laps to go, then maintained his advantage over second-place Brad Keselowski to win the 5-Hour Energy 301.

“This is such an awesome win, such an awesome comeback,” said Busch in Victory Lane. “Its just so much fun to win these races. And to win with this group of guys – Adam Stevens and this bunch, all my pit crew. Since 2008, they deserve all this.”

When the field took the final lap of the race, Alex Bowman cut a tire and pounded the turn 2 wall. Under NASCAR rules, the race ended under caution, securing Busch his first Loudon win since 2006.

With wins coming on a weekly basis for the driver five months removed from a hospital bed, only 58 points separate Busch from the 30th spot in points – the position he must reach in order to qualify for the Chase for the Sprint Cup come September.

“This is a crazy sport and you never know how its going to turn out,” said Busch. “To do it in the fashion we have been, just winning these things. That is just spectacular.”

The victory was the third for Busch and the second in a row following victory at Kentucky Speedway. However, this week was not as smooth as one week ago as a green-flag pit stop on lap 244 put the No. 18 a lap behind and off strategy with the leaders. A risky pass through the top two of Keselowski and Kevin Harvick put the 30-year-old on the lead lap minutes before a yellow flew due to fluid on the track.

“Luckily,” Busch says, “I got back on the lead lap before the yellow came out. That saved us right there.”

The only driver to have more seat time out front than the race winner was Keselowski.

“[I was] just hoping to catch a break and didn’t catch one,” said Keselowski after chasing Busch for the final 40 laps.

The Team Penske man started 10th and by lap 67 was leading the event. Holding the top spot for 101 laps, Keselowski seemed to struggle on the late restarts, losing the fight to Busch and finishing in the runner-up spot.

Harvick led laps for the first time since Michigan four races ago, getting out front for 59 circuits before falling to third-place. The reigning champion took Sunday’s run as a stepping stone to a better race when the series returns to Loudon in the Chase.

“We were off on Friday and were able to rebound and have a good Saturday and a good race car today,” said Harvick. “It’s encouraging for two months (when the series returns to Loudon) – that was probably our biggest benefit today, but I think we can be better.”

A trait that comes with racing at Loudon in the middle of July is the heat. After the checkered flag flew, ending nearly three hours of racing, drivers Michael Annett and Matt DiBenedetto went to the infield care center for fluids while AJ Allmendinger seeked fluids at his hauler.

“It was a tough one for sure,” said Austin Dillon of the hot conditions. “It was hot out there, but we worked hard.”

Bowman had the hottest day of anyone, suffering a cut tire. The Tommy Baldwin Racing crew failed to completely remove the rubber from the blown tire from the wheel well. As a result, the leftover rubber and hot brake rotor sparked a spectacular fire from his right front while exiting pit road.

Landon Cassill qualified a season-high 13th driving his No. 40 Chevrolet. The Hillman Racing driver raced in the top 15 – battling the likes of Joe Gibbs Racing and Hendrick Motorsports for position – before an untimely caution took him on the lead lap, finishing 30th.

Derek White made his Sprint Cup debut, finishing eight laps down in 39th in his No. 33 Chevrolet for Circle Sport and owner Joe Falk.