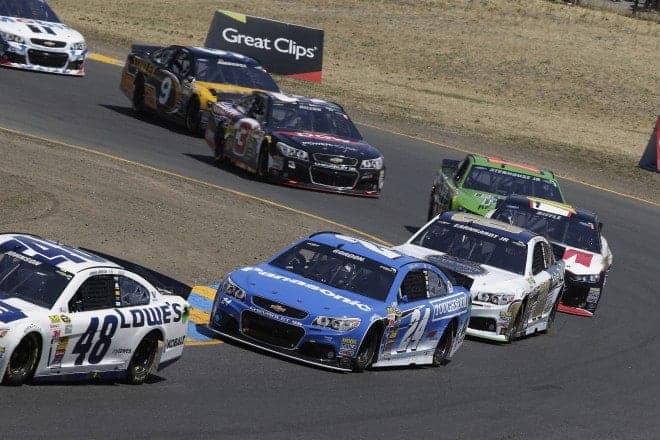 Right turns? The NASCAR Sprint Cup Series doesn’t usually do many of them, but this weekend’s round of stock car action will be an exception.

The twisty, 11-turn Sonoma Raceway is the next track on deck for NASCAR’s top series, a track that is likely to inject some life into what has been a rather bland season up to this point. Sonoma is a short track disguised as a road course, and every year this race features lots of contact, lots of flared tempers and many servings of unpredictability. It is the biggest wild card left on the schedule between now and the Chase, and like any wild card-esque race, lots of questions come packaged with every trip to Sonoma.

And that, ladies and gentlemen, is where Four Burning Questions comes in.

1. Is this the best chance for a nontraditional winner to break into the Chase?

Sonoma is the biggest wild-card race left before the Chase starts. With how the intermediate and flat-track races have been dominated by a few drivers/teams this season (Nos. 48, 41, 4, 78), there are really only three races left where an unexpected/unusual winner could break through: Sonoma, Daytona and Watkins Glen. Daytona and the Glen tend to be slightly less random than Sonoma is, evidenced by the fact that there hasn’t been a repeat winner at Sonoma in 10 years. As such, Sonoma takes the crown as wildest wild-card left on the circuit.

So what does that mean for Sunday? That we really have no idea who is going to win this race. Did you expect Carl Edwards to win here last year? How about Martin Truex Jr. back in 2013? Luck plays a factor at Sonoma more so than any other track. Hitting the right pit strategy and forecasting cautions correctly is absolutely paramount at Sonoma given how hard it is to pass there. So much has to go right (ha!) for a team to have a winning day in Napa Valley that it really isn’t surprising that there hasn’t been a repeat winner here in years.

This lack of predictability should play right into the hands of adept road racers like AJ Allmendinger and Clint Bowyer, guys who are far outside the Chase cutoff line and need to take chances to get a win. With the right car and the right strategy, anyone can win this race on Sunday. And my guess is that guys like Allmendinger, Bowyer or perhaps an even bigger underdog (well… an underdog with some road-racing talent) will be the guys who take the chances necessary to go to Victory Lane on Sunday.

There was a time, many years ago (OK… more like 15 years ago) when Sonoma was viewed as one of the most forgettable tracks on the circuit. NASCAR, then in its exponential growth phase, was known for its scintillating action on oval tracks. NASCAR fans loathed road courses. Many viewed them as too European. Others couldn’t wrap their heads around the stark differences between oval and road racing. But most people just didn’t like the crappy racing that road races used to produce.

But like anything else in life, tastes tend to change and people’s perspectives shift over time. Courtesy of the ever-increasing parity in the sport and a revolving door of playoff systems, road races are now perceived to be every bit as important as oval races, thus leading the teams to put more effort into them. That, of course, led to better racing. Seemingly overnight, Sonoma went from a mild-mannered and boring stroll through the Napa Valley to a rough-and-tumble, short-track-style, mayhem-filled rat race. Contact is the new norm here, as everyone is so equal (equipment advantages are minimal here) that force is often the only way to make passes.

With contact comes angry drivers, and with angry drivers comes feuds. You can be sure that at least one pair of drivers will get into some sort of disagreement on Sunday, and unlike most tracks, Sonoma is a track where drivers won’t be afraid to take payback. Watch out for such bad behavior on Sunday.

3. Is this Jeff Gordon’s last great chance at a victory before the Chase?

It has become abundantly clear that, for whatever reason, Jeff Gordon and the No. 24 team just do not have a great handle on this year’s rules package. Whether it’s Jeff’s driving or crew chief Alan Gustafson’s setups, something just has not clicked for the No. 24 on downforce-oriented intermediate tracks, and it just doesn’t look like that team will be visiting Victory Lane on that style of track anytime soon.

Luckily for Jeff, the Cup schedule is not composed of 36 straight intermediate tracks (god help us all if it was…). Road courses like Sonoma, superspeedways like Daytona, short tracks like Bristol – these are all tracks where the driver outweighs the effects of the rules package or the equipment underneath the race car. At Sonoma in particular, equipment and setup is almost meaningless: strategy, driver experience and most importantly luck are the biggest keys to success. That means the No. 24 team’s struggles with the rules package go out the window this weekend, leaving Gordon and his superior road racing talent as the key differentiating factors over the rest of the field.

I believe this is Gordon’s best chance to get that win this team has desperately searching for in 2015. In fact, with how they’ve been running as of late, if Gordon were to win, it could very easily be the last victory of his Sprint Cup career. That’s probably not what Gordon fans want to hear, but it’s a realistic possibility and would only serve to heighten the importance of a Gordon victory this weekend.

4. Could this be the last stand for Sprint Cup road ringers?

There was a time in this sport when road course specialists would fill up entry lists for Cup races at Sonoma and Watkins Glen. In the ‘70s, ‘80s and ‘90s, NASCAR drivers notoriously put very little effort into their teams road course programs, and as a result, one-off drivers from road-racing series would often come in and grab solid finishes since most of the field was composed of subpar-at-best road racers. Top road racers like Boris Said and Ron Fellows would often get top-flight rides for these events, and there were usually as many as 8-10 road specialists in the field.

But nowadays? The road-course ringer is a dying breed. Sprint Cup drivers have caught up to the rest of the world in terms of road-racing prowess, and many are now better road racers than the specialists who at one time would overshadow them in two races every year. The ever-dwindling need for road course specialists has been reflected in the entry lists for these races in recent years, with this weekend’s race featuring only two, count ‘em, two specialists in the field (Said and Justin Marks).

My prediction is that within the next two or three years, Sprint Cup road races will be totally devoid of road course ringers. The only thing that could reverse that trend would be a stellar performance by either Said or Marks on Sunday. With the road-course ringer phenomenon catching its last breaths, one of these drivers will have to perform in a serious way to prove that such a niche still exists in Sprint Cup racing today.

This year on Four Burning Questions, I will share my fantasy picks from the Frontstretch Fantasy NASCAR League, located here on NASCAR.com. Here are my picks from this week. Join the league and see if you can beat me!

If they can steal the yellow flag and hide it so the race can run without Nascar manipulation.