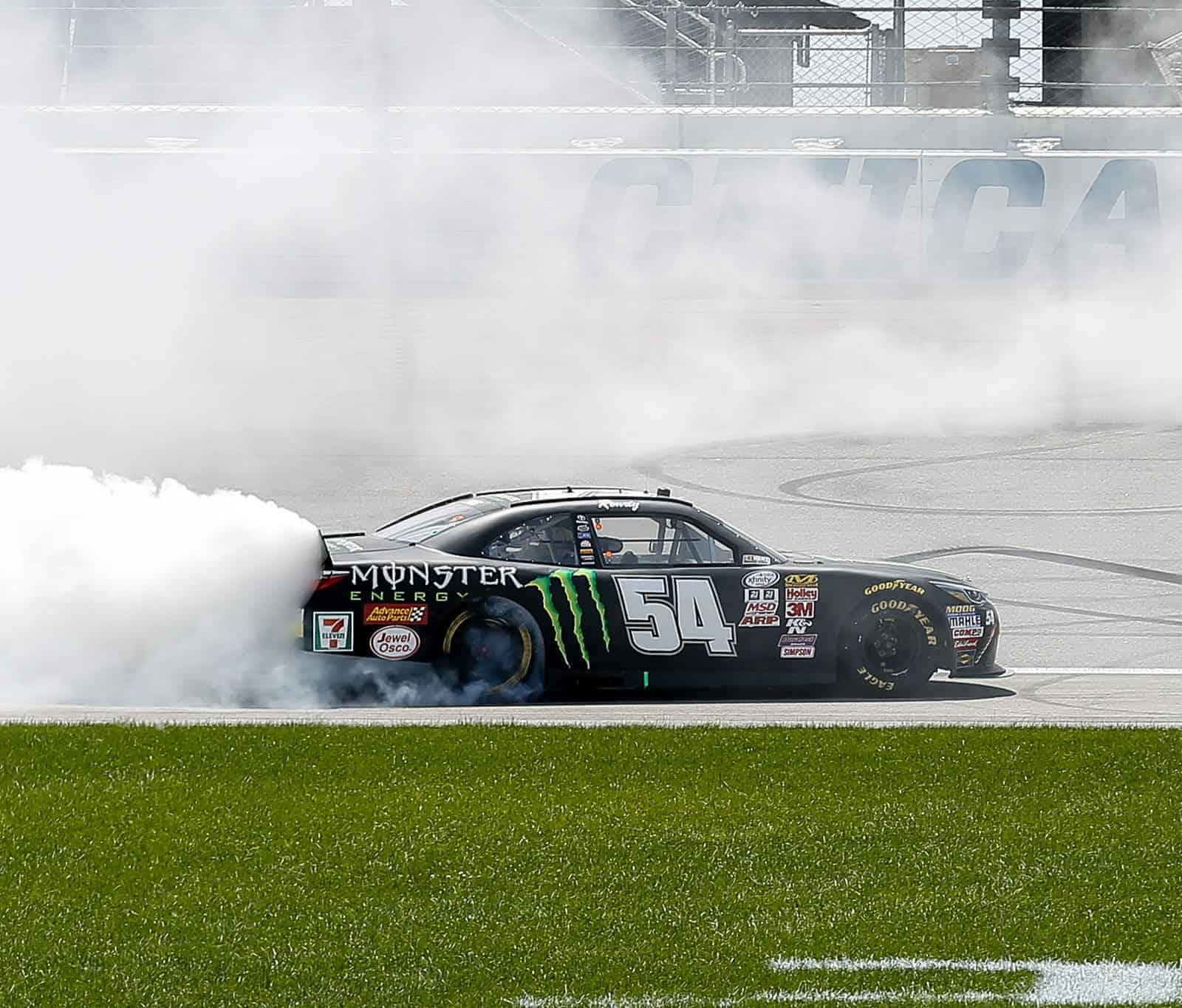 Lean, mean, black and green for the second straight weekend. The No. 54 Toyota raced back into Victory Lane once again. At Michigan, it was Kyle Busch earning the victory, but this weekend’s standalone event at Chicagoland Speedway belonged to rookie Erik Jones.

The 19-year-old driver for Joe Gibbs Racing led a race-high 94 laps on Sunday afternoon after the Owens Corning AttiCat 300 was postponed late Saturday evening due to heavy rain and lightning in the area. Passing Ryan Blaney (who was in a backup car after wrecking in qualifying) with 10 laps remaining in the race, Jones was able to earn his second career triumph in the NASCAR Xfinity Series.

After winning the Camping World Truck Series event at Iowa on Friday evening, along with a super late model race at Berlin this past week, Jones completed the trifecta. The victory marks the 105th for JGR in NASCAR’s second-tier division, and helped move the No. 54 car to eighth in the owners’ standings, two spots up from last weekend.

Brendan Gaughan finished fourth for Richard Childress Racing, marking his second top five of the year. Last season, he had two top fives all year. 14 races into the season, he now has seven top 10s, which is the same amount that he had in 2014. Gaughan’s teammate, Austin Dillon – the lone full-time Cup Series driver in the field – finished third in the No. 33 car after leading 29 laps.

There were a race-record 23 lead changes on Sunday. The previous high was 21, which was set in 2011. The 300-mile contest lasted two hours and 34 minutes, which was slightly more than a half hour longer than last year’s June race at the 1.5-mile track.

Title leader Buescher was nailed with a speeding penalty during a green-flag pit stop just prior to the halfway mark. However, after receiving the lucky dog, the No. 60 team was able to get back on the lead lap. In yet another championship-caliber effort, he rebounded to finish fifth for RFR as he looks to carry the momentum into the off-weekend.

Wallace’s rough stretch of races nearly continued in Chicago. After finishing 17th and 15th, respectively, in the past two races, the No. 6 car ended the day in the top five. He spun out on lap 96, but was able to recover after being positioned in the top 10 on the second to last restart with 41 laps to go. Wallace finished 10th, which is his fifth top 10 of the year.

Elliott was running in the top 10 throughout the day, and seemingly had a car capable of finishing in the top five. However, coming off turn 2 with 23 laps remaining in the race, the No. 9 car got loose and spun out. He finished 14th, which keeps him third in points, but 43 markers behind Buescher.

Ben Rhodes was looking to finish inside of the top 15 at Chicago, his first 1.5-mile race for JR Motorsports. But with a slick track, the No. 88 car slipped into the wall, forcing Rhodes to lose multiple spots. He ended the day in 21st, which is not indicative of the solid race he had.

After the caution came out for Dylan Lupton on lap 149, the majority of the lead-lap cars came down pit road. However, after being radioed in that pit road was open, the flag man displayed the red flag and the red lights were on. 22 drivers were penalized, which created chaos among those on track as NASCAR officials attempted to determine the lineup. Drivers have been told for multiple years to always go by the flag man and nothing else while entering pit road.

Underdog Performers of the Race

In his Xfinity Series debut, Ross Kenseth was able to maintain a position in the top 10 throughout the day. Even after pitting during the final caution, he rebounded to end the day in sixth. It is unknown when his next race will be, but finishing in the top 10 was exactly what the doctor ordered for the son of Matt Kenseth.

Finishing in the top 15 for the first time this season, Ryan Sieg received much praise on the broadcast for the 300-mile race. Hanging inside of the top five at one point, the No. 39 car was solid throughout the day. Sieg led six laps during a green-flag pit cycle, which marks the first time since Texas in April 2014 that he has led any laps in the Xfinity Series.

Jones won the Truck Series race at Iowa on Friday evening. Bobby Gerhart ran the ARCA Series race at Chicagoland, along with eventual winner Reed, who won the Xfinity Series season-opener at Daytona.

In FOX’s last race of the season for the Xfinity Series, the standalone race was thrown on FOX Sports 2. The kick in the groin for a race that arguably produced more action than any other intermediate event of the year is another reason why fans should be thrilled about NBC’s arrival.

Strategy was at a premium on Sunday afternoon, especially late in the going with the pit-road situation. Buescher’s late-race rebound was another example of how determined the No. 60 team is to win the title. Though it is still early in the season, and he has continuously said that it is still rather early to think about how large of a gap he has, Buescher has nearly a full-race lead over Dillon. The rather comfortable mark heading into an off-weekend prior to Daytona is going to be vital for his championship hopes.

The future is very strong for NASCAR, and it was shown throughout the day at Chicagoland. Jones and Blaney fought side-by-side for a majority of the second half of the race, proving that Team Penske and JGR are still the elite teams in the division. Their intense battle was extremely entertaining, and enabled fans to grasp what has been the missing piece of the Xfinity Series whenever it is infiltrated by the Cup stars.

I was very disappointed when I saw it was on FS2 because I was all set to watch it.
Here is a question, if a race is broadcast on FS2 and nobody saw it, was there really a race?
Oh how low NASCAR’s stock has sunk.

Fox found the XfiniCup series likely to draw less viewers than a women’s soccer game between two foreign countries! So girls soccer stayed on Fox Sports One and CupLite was relagated to Fox Sports NobodyGetsIt. Cup drivers haven’t killed the series though. Nothing to see here. Move along folks.

The complaining about the Cup drivers makes no sense. Without them the series is nothing more than a late-model touring series selling 1200 tickets.

And with them it isn’t even racing, just extra practice for the next day’s Cup race with empty stands and infomercial TV ratings. Fox, the network that paid millions to broadcast it, doesn’t even think it can outdraw foreign women’s soccer. Pathetic.

Yep. That late model touring series that provided great racing. You can’t even call what this series is now racing. Its not competitive and nobody is watching because they know before they even fire the engines who will win the race. Even with all the campers at the track on Cup companion weekends, nobody goes to watch these races. But yeah the Cup drivers are what holds this series together all right. Give me a break!

I also presume that, as was the case at Fontana for years, the stands were empty because the fans were all out in the merchandise area.