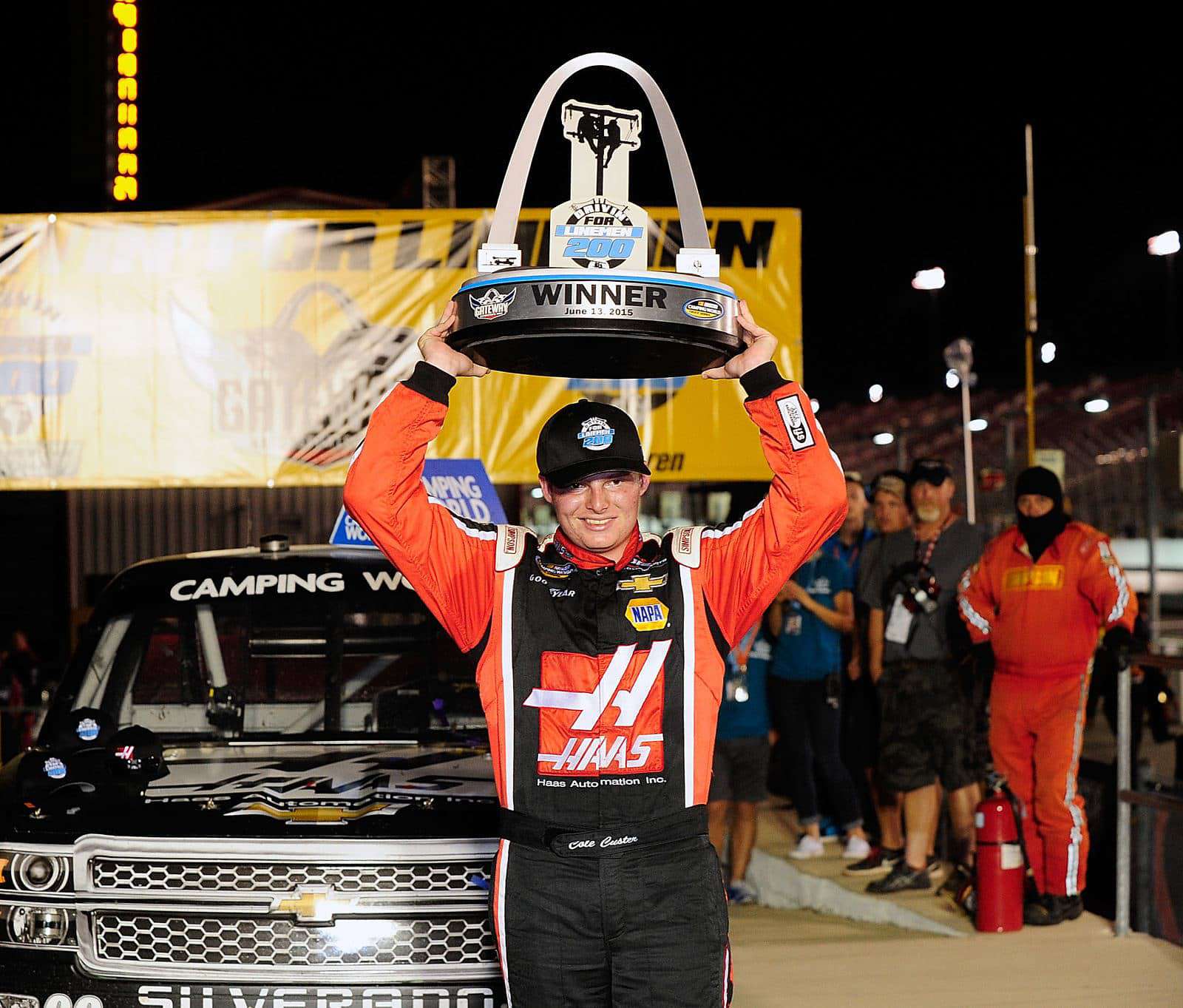 In a Nutshell: When the dust settled and the two dominant trucks of the night sat idle off the track, Cole Custer was there to take the checkered flag in the rain-delayed Drivin’ for Linemen 200 at Gateway Motorsports Park Saturday night. Custer took advantage of a missed shift by Tyler Reddick that stacked up the field and scored his second career win.

Who Should Have Won: Once again, it was a toss-up between Matt Crafton and Erik Jones as the fastest trucks on the track Saturday night. The duo combined to lead 133 of 160 laps and held a more than 10-second gap over the rest of the field during the opening 53-lap green flag run. But Jones and Crafton suffered separate misfortunes inside the final 15 circuits and ended the night in 23rd and 21st, respectively, with DNFs to their names.

The Drivin’ for Linemen 200 turned out to be deja vu for Jones and the No. 4 team. Having had four potential wins in a row slip through his grasp, Jones looked like he was on his way to finally shaking the monkey off his back as he led 84 laps on Saturday night. But as he chased down leader Crafton late in the race, he got loose inside the lapped truck of Ryan Ellis and spun, causing a flat left-rear tire that ultimately created a battery problem that ended his night.

Jones was immediately animated on the radio, screaming about lapped traffic ruining his chance for the win. And while there have been plenty of instances where trucks running multiple laps behind the leaders have been rolling road blocks, this one was not one of those. Instead, it was a classic case that we’ve seen so many times with the trucks in recent years: two trucks run side-by-side and the air disturbance just pulls around the inside vehicle.

After the race, Ellis, who slid up into the wall after the contact from Jones but soldiered on to a 17th-place finish, offered his thoughts on the incident via Twitter.

4 lost a LR. I didn't chop him/crowd him & he didn't do anything wrong. He lost a LR tire and tried to save it. Hate to see it end his race.

It’s completely understandable that Jones left upset once again. After all, he had the dominant truck, leading by nearly two seconds early on, and once again saw the win slip through his fingers. With that said, it’s often not adversity that defines a person but rather how they handle it.

The bottom line is that Jones really needs to learn how to lose a little more gracefully. There’s no doubt that he’s passionate and just wants to win – who wouldn’t? But when it comes down to letting his temper get the best of him, Jones will continue to beat himself if he can’t find a way to handle it better.

Almost immediately after the field took the green flag following Jones’s mishap, many expected Crafton would cruise to his fourth win in nine races, but that wasn’t the case. Reddick, with a push from John Hunter Nemechek, nosed ahead of Crafton on the restart, and Nemechek, seeing a chance at the victory, pushed his way inside the two-time champion. However, the move didn’t work and Nemechek got loose, slid up into Crafton and sent the driver of the No. 88 Toyota spinning into the wall, ending his night with a 21st-place finish.

“I haven’t seen a replay yet,” Nemechek said after the race. “I don’t know if somebody got into the back of me or not, but all of a sudden it started turning around. I went to go correct it and I accidentally got up into him. I apologize to Matt Crafton. It just got a little bit free and I got into him.”

The interesting thing is that what happened between Crafton and Nemechek was eerily similar to what Jones had just done a handful of laps earlier. The big difference, though, was that the outside truck took the brunt of the damage, allowing the inside truck to continue to a fourth-place finish.

Was Nemechek driving over his head, trying to squeeze out a better finish than his truck was capable of? It’s certainly possible. But the important thing to note is that he went for the win when he saw the opportunity, and that’s exactly what NASCAR fans need to see more of each and every week.

Points Update: Crafton’s point lead shrank to just 12 over Reddick, who managed to finished eighth after a missed shift on a late restart. Sauter’s third-place finish allowed him to move up a position to third; he now sits 30 markers behind his teammate. Erik Jones, who dropped one spot and John Wes Townley round out the top five.

Hayley remains in sixth, 75 points behind the leader, while Gallagher moved up a spot to seventh on the strength of his runner-up finish. Hemric dropped to eighth, followed by Timothy Peters. Ben Kennedy, in his sophomore season, rounds out the top 10.

“I was just trying to tell myself ‘no excuses.’ I think we were a little bit better than the [No.] 19 (Tyler Reddick). We struggled a little bit all day. I don’t know, I’m just tired. I gotta thank Haas Automation, Gene Haas, Kelley [Earnhardt-Miller], Dale [Earnhardt, Jr.] for giving me this opportunity and Hendrick engines, the pit crew for coming out. We put everything together, we didn’t have the best truck, but we ran a great race. I always knew that we had trucks capable of winning. We just had to put everything together for a race.” – Race winner Cole Custer

“[We] didn’t have the speed in our No. 23 Allegiant Travel Chevrolet that we wanted all day, but we started 14th, so pretty far back there and a track where track position is such a huge deal, that was kind of a cloud hanging over our head to begin with. My GMS Racing guys played the game right all night. We were able to hold off Sauter at the end there. I told my crew chief, better be lucky than good sometimes, I’ll take it.” – Spencer Gallagher, finished second

“It was a decent run. We just got a lot of loose ends to clean up here. The pit crew was just absolutely pathetic tonight. You know, I did all I could do. I came out 12th with 35 to go and got third place out of it. With what happened to the [No.] 4 (Erik Jones) and the [No.] 88 (Matt Crafton), I had a shot to win the race. You know, you just can’t make that up.” – Johnny Sauter, finished third

Up Next: The Camping World Truck Series heads off to Iowa Speedway next Friday night. Last season, this race was held in early July and Erik Jones led 38 laps en route to victory over Ryan Blaney. Coverage for the American Ethanol 200 begins at 8:30 p.m. ET on FS1; the race can also be heard on your local MRN affiliate.

Absolutely inexcusable for FOX Sports to fail interviewing Jones and Crafton after their incidents. I kept waiting for their take on key episodes of the race, but in vain.

Speaking about Erik, I’m losing all the respect I had for him before the season’s start. Ryan Ellis was not at fault when Erik crashed, still he tried to blame him for the wreck. I know, he is very young, but to lose temper in the way he did still was very very wrong. To be gracious in defeat is definitely one of the things Erik must learn, the sooner the better.