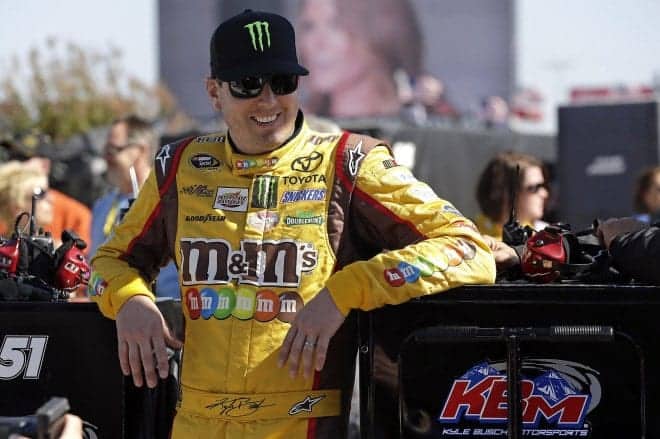 Did You Notice? Kyle Busch could still easily make the Chase with a waiver? Let’s break down how and why following Tuesday’s announcement that he’ll return to the sport, driving the No. 18 Toyota in Saturday night’s All-Star Race along with the rest of the 2015 regular season.

For Busch, he starts from scratch, missing 11 races and scoring exactly zero points. To make the Chase, he’ll have to close a 177-point gap on 30th-place Tony Stewart in the standings while winning at least one race. Scoring a victory though should be the least of Busch’s problems when you take two factors into consideration. First, the Joe Gibbs Racing organization he drives for has swept the short-track races this season. Busch has been strong in the past at both Bristol and Richmond, two easy apples off the tree he could grab in late summer, once his leg injury is sure to be fully healed.

Making up points, in theory, is going to be far more difficult. But it’s also far from impossible. Right now, Kyle’s brother Kurt is averaging a ninth-place finish since returning from his three-race suspension. Let’s say, just for kicks, that Busch averages that ninth-place result over the next 15 races. That’s an average of 35 points per race, giving him a total of 525 by the regular season finale. Stewart, by comparison is on pace to score a total of 418 points over the regular season.

To be fair, JGR hasn’t been as strong as Kurt Busch, Kevin Harvick or Hendrick Motorsports equipment. So, by comparison let’s use teammate Matt Kenseth’s average finish of 15th through 11 races. That would give Busch an average of 29 points per race, adding up to 435 in total – still slightly more than Stewart without taking into consideration bonus points earned for wins and laps led.

I think Busch will easily match Kenseth’s average finish, a consistency that’s left his teammate seventh in the Sprint Cup standings. Kyle, unlike some who have already “clinched” a playoff bid, needs every point possible and will never “settle” for fifth or sixth if a win is not in the cards. That extra 10% effort will be there every single week, good for another two to three passes over drivers that simply don’t need to make the same push until September. Also, take into consideration that Busch is one of the most aggressive drivers on the circuit. This predicament allows the team to “green light” his driving style for pretty much the next four months. Desperate drivers with talent can be some of the sport’s more successful, and Kyle? Post-injury? He’s desperate to prove himself.

There’s no guarantee that Busch will make the Chase. But if NASCAR grants the waiver, he’s far from counted out. I’d say it’s a 60/40 shot.

Did You Notice? There hasn’t been a pass for the lead inside the last five laps of the All-Star Race since 2009? That’s when Stewart took the lead with two laps left and powered to victory, giving him the “mulligan” needed to make the All-Star event this year despite a horrible season. Need we say more about why the event has outlived its usefulness in Charlotte?

Teams always like to take the All-Star weekend to “breathe” during a schedule of 38 race weekends condensed into nine months. Well, if you need a weekend for crews to take a breath, why not hold the All-Star Race at a short track close to home? Bristol’s the most obvious choice, but could you imagine a race at South Boston (Va.), Hickory (N.C.) or even Bowman-Gray? The speeds there would be slow enough for drivers to beat, bang and enact revenge against each other for past offenses. It’s a new oval on the schedule, a new challenge which would eliminate the aero push and put success purely within the driver’s hands.

Sure, seats would be limited at a South Boston, but isn’t it time we finally made a ticket worth something in NASCAR again? What would you like to see; fans openly competing for one of 20,000 open seats or 35,000 fans making a once-lively Charlotte Motor Speedway look like it’s empty? Clearly, the All-Star Race needs to be revamped when even the competitors themselves don’t get amped up for it anymore. So many privately treat it as a test session for the “real” race the following weekend, Charlotte’s Coca-Cola 600, which is still looked at as one of the sport’s “crown jewel” events.

You also wonder whether the sport should tweak eligibility for the All-Star Race at some point. Consider…

I don’t think major tweaks are needed; I would keep Stewart in the field as he is a former series champion, after all. But if a driver like Truex has surged to second in points, that should be a consideration for entry. Maybe any winless driver inside the top five in points could make the starting field? It would be a shame to see the No. 78 team locked out after all they’ve achieved so far in 2015.

Did You Notice? Quick hits before taking off…

Yes, Kyle by the rules (NASCAR rules lest us not forget) could make “The Chase”, but just because you could, doesn’t mean you should. I think it demeans all the others (regardless of Kyle’ reason’s) their hard earned entry via points or wins. Kyle has essentially lost a quarter of the season, shit just happens sometimes. Next year has endless possibilities.

My friend, when it comes to NASCAR the only rule is that there are no rules. He could make the Chase for no other reason then that the color of his car nicely compliments that of those that are tweeted into the Chase.

Agreed. I really wonder why they even have the waiver. No one has yet been denied it. And what happens when someone is denied eligibility?

Seeing that Smoke got a waiver last year, it is hard to say what would cause someone to be denied one.

Give Kyle the waiver. He’s got to be in the top 30 in points and score a win. If he can do it in a shortened season over those who can’t get it done with a full season, more power to him.

As for the All-Star event? Forget Bowman, South Boston and Hickory. Let’s do it at Rockingham!

If Kyle had been injured in the Cup race at Daytona, I’d say give him the Mulligan. But, since he was racing in a series where he is not points eligible and it was strictly a voluntary act, I’d say that’s the chance you take. If he can’t make it into the top 30, too bad.

Amen, that might make Cup drivers think twice before opting for the extended practice afforded by the lower series.

I have the same issue with the waiver for KyBu as Salb does. he wasn’t racing in a cup race and so IMO shouldn’t be eligible for a waiver.

Of course what I think doesn’t matter, NASCAR’s bat, ball and playing field, they will do what they want.

As far as the all-star race, Jenna Fryer wrote a good article for AP on it yesterday. It has been a dud for a while now. I have family living near the Charlotte track, so I’d plan a trip and we’d all go to the race together. However, it stopped being worth the $ so we no longer go. I think they’d be better off just giving the teams a weekend off.

Frankly, Charlotte may be the worst track on the circuit now for action. It’s made the normally whipping boys Pocono and Fontana seem like Martinsville.
Either give the teams a week off or give a track this date that may be better suited weather-wise.

Why doesn’t Brian just pick the drivers he wants in the chase each year? 10 drivers in the chase one year, 20 the next, and 17 the year after, etc…
What does it matter anymore, the whole thing is such a joke.

He’s already done that once, by putting Gordon in “because he could.” He needs to be honest and just say that no superstar will be denied the waiver.

As best as I can tell, the 2015 rules package consists only of throwing more debris cautions.

The best way, I think, to transform the All-Star race would be as follows:

1) Move it to the Thursday night before the 600.
2) Hold the event at ‘The Dirt Track’.
3)Have the drivers race in Late Models.
4)An equal amount of the winner’s purse would go to that drivers’ charity of choice.

That’s it. After 48 years, I’m done. I told myself that if NASCAR approved his eligibility for the Chase, I’d be gone. Every sport needs rules for structure. One upon a time, people complained because NASCAR implemented changes so slowly, but when they did, they usually took effect at the start of a new season and were well thought out. Now there is virtually no evidence of a consistent rule structure. It has hampered the health and well being of the sport overall. In short, NASCAR is guilty of violating the rules in detriment to stock car racing.

I like the idea of giving a new track the All-Star race. But like I’ve said countless of times. Over Bruton Smith’s dead body do they move that race outta Charlotte.

I’ll continue saying I would be OK with the new NASCAR without a credible championship if they would provide Bowman Gray type excitement during the season. The problem is, they traded off their integrity and the racing hasn’t changed.