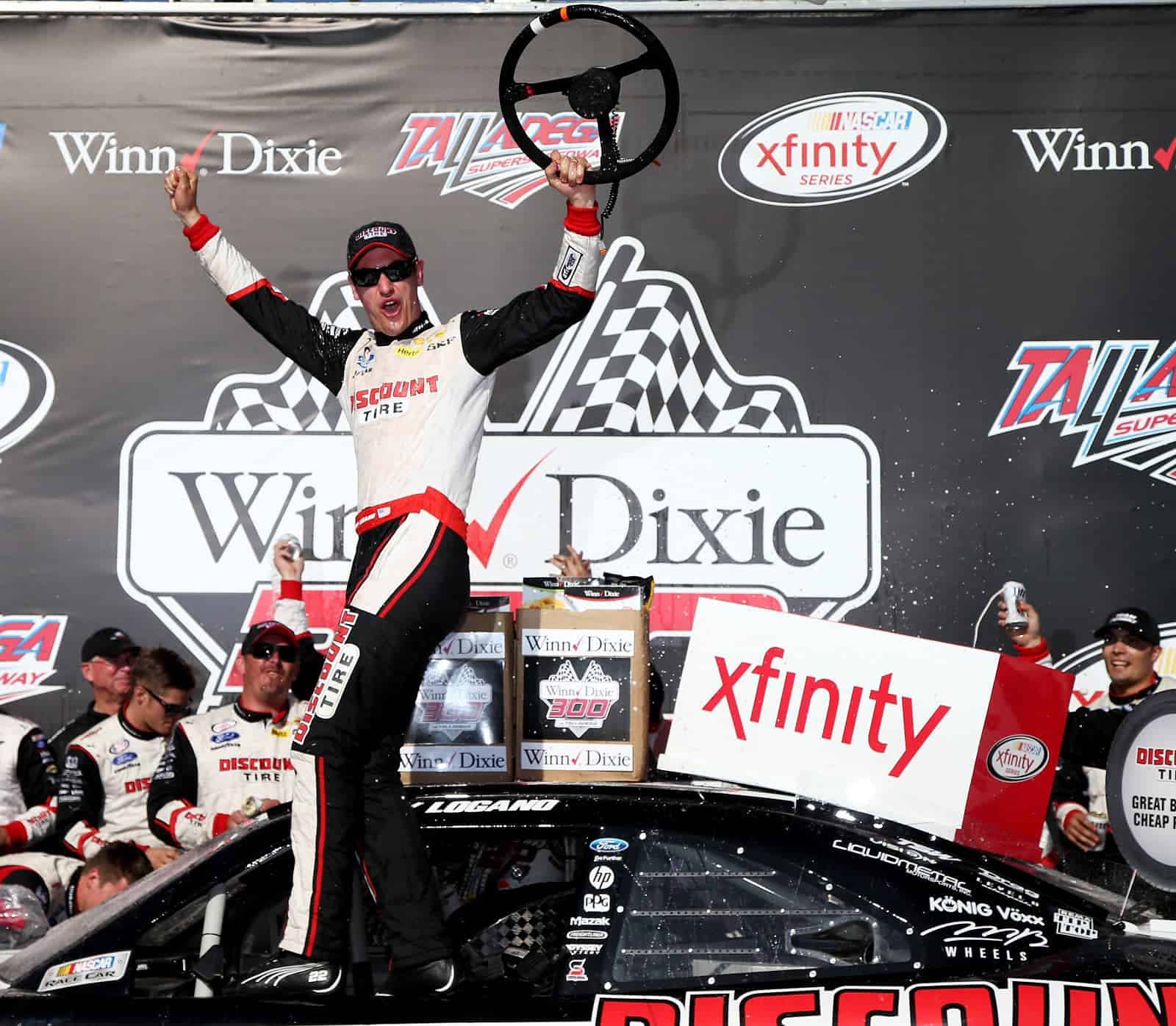 It was another stunning weekend for Team Penske in the NASCAR Xfinity Series as Joey Logano piloted the No. 22 Ford to Victory Lane for the third time in 2015 – holding off the hard-charging Brian Scott in the process.

Leading 40 laps on Saturday afternoon at Talladega Superspeedway, Logano was able to run up front throughout the day. With four laps to go, he made his way by Elliott Sadler, who led 19 laps en route to finishing seventh, to win the race. The victory is the 24th of his career, and 49th Xfinity Series win for Team Penske.

Polesitter Austin Dillon failed to lead any laps during the 300-mile race, while his brother Ty Dillon took the lead on lap 10 after Darrell Wallace Jr., Chris Buescher and Daniel Suarez swapped the top spot throughout the first few laps. But on lap 3, Wallace got into Sadler, which caused Brendan Gaughan and Mike Bliss to spin out, though none of the drivers incurred major damage.

Reigning Xfinity Series champion Chase Elliott blew a right front tire on lap 40, which took him out of contention early in the going. And then there was the Big One.

As green-flag pit stops were taking place, Suarez was tapped from behind by Ryan Sieg. A 10-car wreck on the frontstretch ensued, destroying multiple cars, including  those of Daytona winner Ryan Reed, Harrison Rhodes and more. With 15 laps to go, the youngest of the Dillon brothers got into Chad Boat, creating a seven-car incident that collected Kasey Kahne, Wallace, Blake Koch and more.

Scott continued to prove that he is capable of winning in the Xfinity Series. Leading 10 laps and running up front throughout the day, Scott was extremely close to beating Logano for his first career victory. If he can continue to run strong, Scott will be a championship favorite heading into the second half of the season as long as he can finally get into Victory Lane.

Joey Gase, making his 85th Xfinity Series start, earned his first career top 10 and top five in the same day. Gase ran inside the top 15 for the majority of the 300-mile event, and gave team owner Jimmy Means the team’s first top 10 in 284 starts.

Making his first start at a restrictor-plate track since 2012, Kenny Wallace returned to Talladega with JGL Racing – replacing his brother Mike Wallace for the weekend. However, after running well throughout the day, Wallace was involved in one of the major incidents on the day, and finished 38th.

Boris Said made his return to the Xfinity Series this weekend in the first of seven scheduled events with Joe Gibbs Racing. Leading a lap at one point, he ended the day in 16th, but ran in the top 10 for the majority of the race as he gets readjusted to NASCAR’s second-tier division.

The Richard Childress Racing pit-road curse continued on Saturday afternoon. Gaughan’s No. 62 car spun hard onto pit road and he clipped the No. 98 team’s pit stall, which injured two crew members. Troy Brady, a crewman for the Biagi-DenBeste Racing team, was transported to a local hospital, but was awake and alert at the time.

Underdog Performer(s) of the Race

JJ Yeley earned his first top five in nearly a year for JGL Racing. The No. 28 car was one of the frontrunners throughout the race, and Yeley piloted his car into the fourth position by the time the checkered flag waved.

Jeffrey Earnhardt had another top-15 finish for Viva Motorsports, finishing 12th, which ties his best result in 65 Xfinity Series starts. Benny Gordon made his return to the division, driving the No. 17 Toyota, and finished 13th on Saturday. Jeremy Clements, Peyton Sellers and Mario Gosselin also came home with top-20 results for their underfunded teams.

Nine drivers ran both races during the course of the weekend at Talladega. The top four in the Xfinity Series race each ran the Sprint Cup Series event at Talladega on Sunday. Logano, Scott, Austin Dillon, Yeley, Buescher, Aric Almirola, Landon Cassill, Kahne and Gaughan each ran the two contests this weekend.

Though Logano won in rather dominating fashion, Scott gave him a run for his money, along with Sadler. The two drivers were expected to be contenders on Saturday, and did just that. However, the “tandem” draft came into play on the final lap, which went undisciplined by NASCAR, and gave Logano the advantage he needed to win.

Ty Dillon continues to hold the lead in the standings for his grandfather’s team. Heading into an off-weekend and a stand-alone event at Iowa, it will be a true test to see just how strong he is. It will be a weekend where Elliott or Buescher can show how they plan on beating the No. 3 team, which is something to look forward to for those who are tired of seeing dominance by Cup drivers.

Wow, they Crystal Ball and Fortune telling is out in full swing and also what NASCAR did or did not do, based on a no hard and fast rule as to what is over the line or getting over the line. Congrats to Joey Gase and shame on all around the web that did not notice this fantastic achievement, as usual. I betcha most can’t even tell who the top 5 were and how old they were. I always root for Joey Gase! He went out and celebrated with his grandparents at Applebee’s…awesome!!!!!!!!!!!!!!!!!!