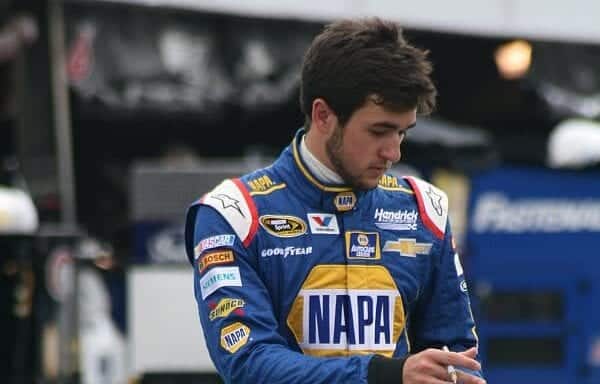 The newest generation of racers has grown into the NASCAR Xfinity Series, and one driver has emerged as the possible future face of NASCAR.

Just over one year ago, one young man entered Victory Lane in NASCAR’s second-tier division for the first time. The second-generation driver, a teenager who had yet to complete high school, showed his full potential. However, it was just the start of what would become a championship journey.

Chase Elliott is now a year removed from his first career Xfinity Series victory. Within that 12-month period, he has won two more races, earned a championship, signed a deal to be Jeff Gordon‘s replacement for the 2016 season and made his NASCAR Sprint Cup Series debut.

Yeah, it’s been quite a year for the Georgia native.

But after Dale Earnhardt Jr.‘s crew chief Steve Letarte departed Hendrick Motorsports for NBC Sports, Elliott’s crew chief Greg Ives was named as his replacement, with Ernie Cope moving to Elliott’s team. Though chemistry between the two was rough around the edges at first, as expected, the No. 9 team sits third in the standings, which is a spot higher than he was five through the 2014 season.

With four straight top-10 finishes, Elliott has reemerged as the championship favorite in his sophomore season. Cope’s experience will guide him to Homestead, especially considering he nearly won a title in 2011 with Elliott Sadler, who was driving for Kevin Harvick Inc. at the time.

Though he didn’t have many struggles in his championship season, the 19-year-old driver has faced some adversity early on this year. His average starting position is outside the top 10, which is unlike JR Motorsports. Teammate Regan Smith has an average starting position of seventh to begin the year, even though his average finish is slightly more than three positions worse than Elliott.

Elliott will also begin his adjustment to the Cup Series, where he is going to make four more starts before the conclusion of the season. Though spread out, his schedule consists of some of the sport’s toughest tracks, which will likely make his transition easier heading into 2016. Moreover, he is paired with Kenny Francis, who is his third crew chief since he started running in the Xfinity Series.

The experience of working with multiple crew chiefs will give Elliott a few new perspectives. Francis has 13 seasons of Cup Series experience under his belt as a crew chief, mainly with Kasey Kahne. If all goes well, the opportunity could enable him to return to the pit box full-time in 2016.

As Elliott continues to grow, so will his brand.

NAPA Auto Parts has already created a strong bond with the son of former Cup Series champion Bill Elliott. His start at Martinsville was the first time the brand was on a Cup car since Martin Truex Jr.’s final race with Michael Waltrip Racing at Homestead in 2013. 3M is signed through 2017 with HMS as a primary sponsor on the No. 24 car, which Elliott will drive, and Axalta will be on board for some races as well next year. This gives Elliott something that few drivers his age have, and that’s the capability to show sponsors he can be the next big thing.

Check on him in a year. Let’s see where he’s at then. Maybe not just a NXS champion, but a Cup winner by then?

News and Notes for Texas