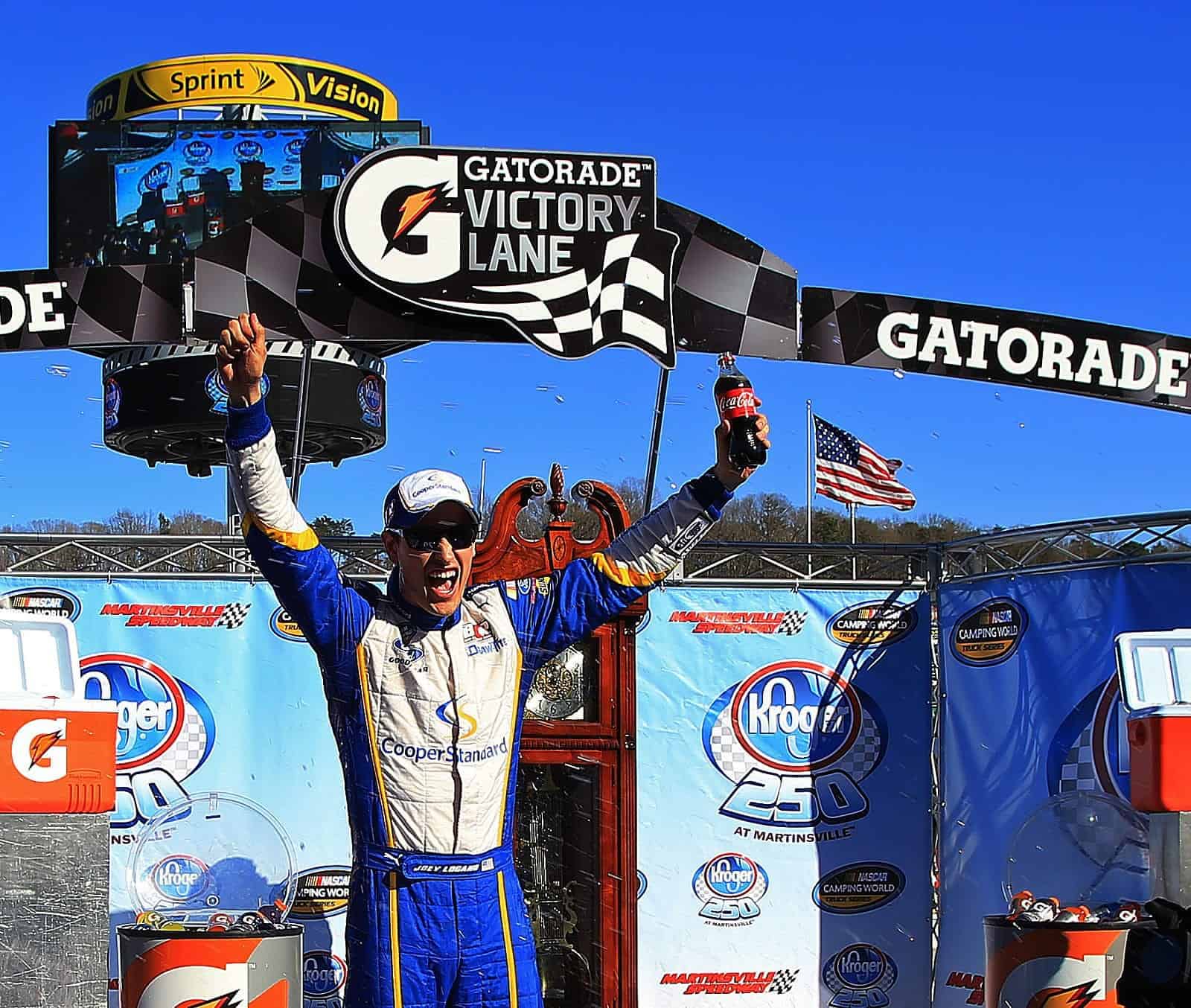 In a Nutshell: Joey Logano shoved his way past Matt Crafton on a green-white-checkered finish to win the Kroger 250. It was Logano’s first Camping World Truck Series race at Martinsville Speedway and his first series win. Crafton, Erik Jones, Johnny Sauter and Tyler Reddick rounded out the top five.

Who Should Have Won: Crafton. Crafton makes tricky Martinsville look easy. Logano led a lot of laps in clean air at the start and made the winning pass, but Crafton gave a clinic on how to race the half-mile speedway. Unfortunately for Crafton, Logano happened to attend. Logano led more laps and nabbed the win, but Crafton driving the race look effortless, and he had the best truck for most of the race.

One of the Best? He took the field to school on how to race at Martinsville this week, but Crafton, in regaining his points lead, could be on the way to something even bigger. Over the last few seasons, Crafton has emerged not only as the best CWTS driver right now, but in some ways one of the best the series has seen. His career win total is just six, tied for 19th all-time. But his two consecutive titles set Crafton up to join an elite group: only two drivers have ever won three consecutive titles in one of NASCAR’s top-three series. One is Hall of Famer Cale Yarborough, while the other is certain first-ballot inductee Jimmie Johnson. Should Crafton win a third this year, it brings to light an interesting questions: where exactly will the Truck Series and its drivers fit in the sport’s history?

The series is relatively young at 20 years and counting, but the Xfinity Series saw its first career driver, Jack Ingram, inducted into the Hall of Fame last year. Career CWTS drivers haven’t yet been put to that test, though it’s likely that Ron Hornaday Jr. and Jack Sprague will make the nomination list in the next few years, with a few others eventually receiving nominations (Mike Skinner and Todd Bodine come to mind). Which still leaves the Crafton question. We don’t yet know where Crafton’s win total will end up, but it likely won’t be in the neighborhood of Hornaday, Sprague, Skinner or Bodine. If his title streak stops this year, he’s likely not going to be in the conversation. But three in a row would elevate that conversation considerably, entering Crafton into the debate about the series’ best and what that means.

Learning Curve Martinsville Speedway provided quite an education for some of the youngsters in the race. While it’s a great track for getting track time in a national touring series, it’s not easy on the rookies and part-timers. Finishing in the top 10 is quite an accomplishment. Jones and his teammates Daniel Suarez and Justin Boston all did just that. John Hunter Nemechek looked like he was on his way to ta top 10 as well, but a broken transmission killed that. Cameron Hayley, teammate to Crafton and Sauter, finished 11th after running in the top five for part of the day, and most of the Rookie of the Year candidates finished in a cluster in the teens, with a couple of exceptions. Some of the smaller teams hoping to make headway struggled through the race. It’s a reminder that this is a place where the short tracks of America meet the big time, and that there are some talented drivers coming through the ranks. It’s also a reminder of why the CWTS was originally meant to be a short-track series for both up-and-comers and lifers who wanted to run tracks like this one instead of the bigger speedways.

Temper, Temper… but As often happens in the close confines of a short track, tempers flared during the race on Saturday. For a while, it mainly took the form of impatience and shoving someone out of the way when a driver tired of running behind a slower truck. But as the laps closed in on the 250-lap distance, things got a little more heated. With Logano in the lead, Crafton’s patience was wearing thin, and Crafton gave Logano a shove as the pair dove into turn 1, making Logano slide up a little but not turning him. What the pair didn’t count on was Cole Custer making a move on them both, shoving both Crafton and Logano up the track. They didn’t wreck, but both were hot under the collar. As Crafton closed in on Custer, Logano’s remark on the radio was, “Crafton better wreck that son of a b***h!” Crafton apparently shared Logano’s frustration with Custer, because he turned him around coming off of turn 4.

Still, other than maybe Crafton’s payback move, the racing at the front was clean. Nobody was shoved into the wall; the moves were all bump-and-run types, which, when done correctly, moves the other driver but doesn’t wreck him. They have been a (often necessary) part of short-track racing for decades and aren’t the same as putting someone in the wall for the win. No lines were crossed, which made for the best kind of racing for the fans.

No. of rookies in the race: 13 (subtract Chavous, who failed to qualify, and add Suarez, Matt Tifft, Tommy Regan and a debuting Griffin)

Rookie of the Race: Jones, finished third. It was his third top-10 in four races at Martinsville Speedway.

Points Update: Reddick’s lap 34 spin was early enough that he had plenty of time to make his way back into contention, and because of that, the slim two-point lead he had coming in only turned into a two-point deficit leaving. Crafton reassumed the lead after his second-place finish. Reddick is now two behind Crafton. Jones sits six points off the lead in third with a 10-point gap over fourth-place Sauter. James Buescher rounds out the top five, 12 points behind Sauter and 28 behind Crafton.

“I felt like the first half of the race I raced everybody clean. The [No.] 29 (Joey Logano), I passed him earlier and didn’t put a mark on him and whenever he got back to me later on, he was beating my bumper off. Inside of 10 [laps] to go, I said that it was every man for himself at that point. I wasn’t going to wreck him, but I was definitely going to put a bumper to him here and there, but I definitely wasn’t going to wreck him. Then the [No.] 00 (Cole Custer) just came in there and pile-drove us both. It’s racing.” – Matt Crafton on his race with Joey Logano in the closing laps

“We worked our way up to third and once the [Nos.] 29 and 88 started racing really hard, I made up a lot of time on them.  I didn’t mean to make contact with the [No.] 88 getting into the corner, but it happened. I expected that if he got back to me, he would probably try to move me, so I wasn’t very surprised when he did.  It’s Martinsville and it’s hard racing. I learned a lot and it was fun out there today.” – Cole Custer on the late-race move he made on Matt Crafton and Joey Logano

Tough day at Martinsville. Our @92truck was fast but lost the brakes when the brake hoses fell off. Bummer. #fun whileitlasted

Ended up p9, great job by @VenturiniMotor giving me a good truck, just got caught in a typical Martinsville restart at the end. Solid day!

Up Next: From the “Worst Schedule Ever” category, the Truck Series is out of action again until May 8 at Kansas at 8:49 p.m. ET. That race will be broadcast on FOX Sports 1 and radio coverage will be on Sirius XM channel 90 and MRN Radio.

Believe it or not, the Truck Series has had worse schedules. In 2013, Martinsville was the bridge from Daytona to Charlotte.

Each race I tune in for a few minutes to check on how NASCAR’s destruction of this series is progressing. There was No one there. No competition equals no fans, who but anybody could have figured that out!

To be fair, the racing Saturday was great. The crowd was down from what it usually was at Martinsville for the truck race (Cup crowd was solid) because it was so cold. Wind chills were in the low 30’s. I was freezing sitting inside the press box and would not have been able to stick it out sitting outside on metal bleachers. The racing wasn’t the reason for the sparse crowd. Plus, you have to put in perspective what makes a good attendance for a series other than Cup. AAA baseball teams don’t get nearly the crowd the majors get, but that doesn’t mean the product isn’t good; it’s a different standard of measure.

JQ
You mean to tell me that fans didn’t come out by the thousands to watch a cup star Logano come out and dominate the race? Well according to the brilliant journalists, including many on this website, tell us over and over again that the truck and busch series needs all these cup drivers in order to draw a crowd. The facts do NOT back that up, but they keep on telling us that anyways because those are nascar’s orders.