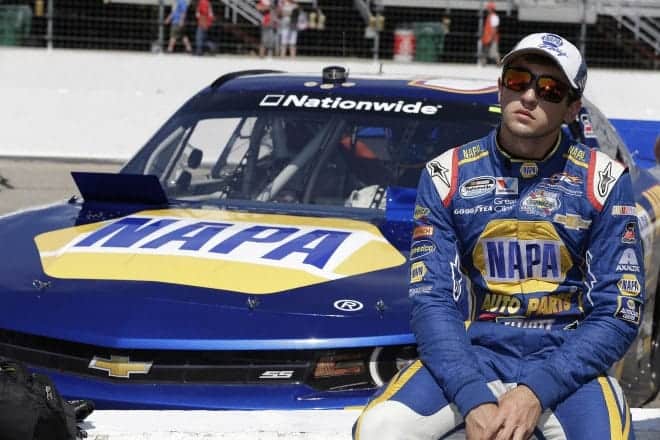 A new title sponsor. New drivers and fresh paint schemes. Rookies moving up the ranks. It seems like yesterday I was writing my final Nuts for Nationwide column after Homestead.

But now, it’s time for Eyes on XFINITY.

2015 is a much different year. Headlines are screaming at us. There are so many things to look forward to, especially in the NASCAR XFINITY Series.

NASCAR’s second-tier division is entering a critical time. Criticism has been immense since the tapered spacer came into play in 2008, when horsepower needed to be reduced. The infamous tapered spacer is moving up to the NASCAR Sprint Cup Series this year, which gives an added incentive for top drivers to run in the XFINITY Series. But over the years, they have done just that, and there has been little to no effect on their efforts in the Cup Series.

However, though, there are plenty of Cup drivers that will be racing in the XFINITY Series this year as per usual, 2015 is going to be a season dominated by regulars instead of Buschwhackers. Trust me.

Chase Elliott, the future Hendrick Motorsports phenom who will replace Jeff Gordon in the Cup Series’ No. 24 car in 2016, is set to contend for another championship. The 19-year-old son of NASCAR Hall of Famer Bill Elliott will also run five Cup Series races this year, but for now, his focus is still on the XFINITY Series championship.

But losing crew chief Greg Ives to Dale Earnhardt, Jr.‘s Sprint Cup Series team could be the difference maker in Elliott’s chances at becoming a two-time champion before he reaches 20 years of age. Ernie Cope will be sitting atop the pit box for the No. 9 team in 2015, which could lead to success after he won five races with Kevin Harvick and Kasey Kahne last season.

Although he is a rather fast learner – at least that is what it seems like considering how quickly he moved up from the Late Model ranks to the XFINITY Series – Elliott could struggle with Cope, and he’s never won a title as a crew chief. But experience is going to be a key factor in helping out the young driver. Expectations are high for this team, and it will be tough to come close to his eighth-place average finish for the second straight year, especially with a tighter field.

Last year’s XFINITY Series featured only a handful of drivers that had a chance to beat Elliott for the championship. With Kyle Busch and Brad Keselowski returning to their dominating ways, multiple drivers had potential wins taken right out of their hands. But Keselowski will be running fewer races. Even with Busch continuing to run the majority of the season in the No. 54 Toyota, he will have his hands full with an abundance of youth taking over in 2015.

Darrell Wallace, Jr. is set to finally move up to the XFINITY Series after racing in the Camping World Truck Series for a pair of seasons. False promises have hurt him in the past, but that shouldn’t be the case this year. Roush Fenway Racing’s stable is a lot stronger in 2015, which is shocking considering the downfall of their Cup Series team. Having six races of experience probably won’t help Wallace much this year, yet his tendency to capitalize with limited sponsorship will carry him once again this year.

Roush believes that Wallace and veteran teammate Elliott Sadler could provide the leadership skills it takes to compete for a championship. Both have plenty to prove, especially with the possibility for either one of them to fill in a Cup Series seat in the next year or two given the right sponsorship package. However, his lack of experience is going to be the deciding factor in Wallace’s season. He may not be able to compete with Sadler or Elliott, and it will take a few months to adjust to the XFINITY Series like he did in 2013 with the Truck Series.

In addition to Roush’s changes, the back part of the top 20 in the division will be much more competitive this year. From ninth place to 20th in driver points, only Ryan Reed recorded a top-5 finish, and those 11 drivers earned a mere 19 top 10s.

JJ Yeley, Ross Chastain, Cale Conley, Daniel Suarez and David Starr are just a few of the drivers that have a shot to have a solid 2015 season. Although all of the above are driving for rather small teams with the exception of Suarez at Joe Gibbs Racing, they have the ability to earn a few top 10s, and could even sneak in a top 5 given the right circumstances. Last year’s average finish between those 11 drivers was 23.36. Reed’s average finish was barely inside of the top 20, and that won’t be good enough to keep a spot inside of the top 10 in points this year.

Expect the level of competition to truly form the XFINITY Series into what it should have been years ago, which is a division that is stronger than the Truck Series. With the right combination of drivers, sponsors and teams finally falling into play, more names will be up front than we have seen in quite a while. They might not be at the front of the field, but these drivers have a chance at making a name for themselves, which is what this series will be all about in 2015.

Oh how wonderful! Another year of Gibbs and Penske Cup drivers dropping down into the lower series with their superior equipment and their Cup pit crews, beating up teams that can’t even score sponsors. The only exception is Junior Motorsports, which is really Hendrick Motorsports. Why do you think Gibbs let Wallace get away? Gibbs doesn’t care for the driver’s championship in the least. He can’t beat Hendrick in Cup, but his cars are so dominant in this series. Too, the Coach wanted that car Wallace was supposed to get so he could run Carl in it as much as he can.

The sponsorship issue is serious, and the powers that be should wake up to the problem they created. When someone who proved they can get the most out of underfunded equipment, who proved themselves, but had the team fold because of sponsorship issues, and is popular with true fans, yet can’t get a decent ride (yes, I am talking about Johanna Long), there is a serious problem.

You can give the series a new name, but it’s still same old-same old.

I could barely believe Chase. I even thought it was fake and was ready to be done with the series. I was told something that made me change my mind. I view the series now more like I view Trucks. I no longer have a strong favorite in either lower series, as my Nationwide/Xfinity driver moved up. I sort of like some Xfinity drivers, though.