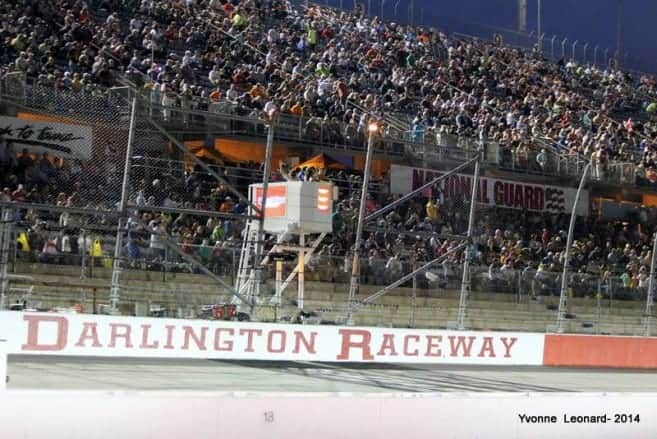 You know what they say … the squeaky wheel gets the grease.

Fans have been crying out for Darlington Raceway to get its historical Labor Day weekend back since the last holiday race weekend back in 2003. Despite the hot temperatures in the South Carolina heat, it seems that tradition won out over NASCAR’s own stubbornness on this one, and fans can once again celebrate their three-day weekend at an egg-shaped racetrack.

Now my only concern is if the attendance will live up to the hype. Oh sure fans have said they want it back, but they screamed and cried for Rockingham to get a date and we all know how well that worked out. Despite history, nostalgia, tradition, and all those good things, sometimes those things go by the wayside for a reason. Sometimes, history runs its course and that’s it. Rarely does history roll backwards. Even rarer does that work out successfully.

However, I’m not saying the Darlington move will be a bust. In fact, I would expect that the first race back at Darlington will be at least a marginal success, if not a pretty big hit. It’s after that I’m worried about. It’s no secret that NASCAR has struggled to gain the popularity it had in the ‘90s and early 2000s, which is around the time that Darlington lost this coveted spot on the schedule in the first place. Who is to say it will have nearly the same staying power it had before, a history dating back all the way to 1950?

I’m happy for fans who are getting what they want, but I hope they live up to all the outcry. If not, you think NASCAR doesn’t listen to the fans now? They’re going to quit if every time they give something back to the fans, no one bothers to show their support. Those of you who made such a fuss about losing Darlington on the schedule need to do everything you can to make sure there are butts in the seat and – if you can’t – in front of the television. After the change, you’ll have no one to blame but yourselves.

What happens to the team members (tire changers, gasmen etc) when someone like Carl Edwards changes teams? Do they get a whole new team or is there some movement there also? Thanks. CA99Fan

What happens to the personnel at the race shop after there is a driver change (coming or going) varies by race team and issues such as legally binding contracts come into play. Sometimes, when a team closes down completely, the team will try to find jobs within the organization for as many of the crew members as possible. When Red Horse Racing shut down Brian Ickler’s team, the organization was able to find other places within the shop for many of them to work.

Though Roush Fenway Racing hasn’t announced what will happen to Edwards’ race team at the end of this year, Joe Gibbs said that much of the personnel for the team that Edwards will be driving for – which will be a brand new race team – will be hired internally. That means that Edwards’ current RFR crew members will probably field Trevor Bayne’s car in 2015, who is going to run the No. 6 full-time after this season.

Of course, a lot can change in the next few months and over the course of the offseason. However, there is lots of money that hovers around deals like this one, plus with the competition being so fierce, movement involving the pit crew members isn’t necessarily uncommon.

It’s just not as glamorous.

“Is NASCAR going to penalize Hamlin for throwing the HANS device? I thought their new rule was to prevent things like that from happening?” Celeste

No, NASCAR said it wasn’t going to penalize Denny Hamlin as they said they felt like he didn’t do anything to violate what the safety workers wanted him to do. That doesn’t make any sense, though, considering that NASCAR’s formal rule specifically says “At no time should a driver or crew member(s) approach any portion of the racing surface or apron … (or) approach another moving vehicle.”

That’s exactly what he did, though, isn’t it? He approached the racing surface to throw something at another car. That seems to fit the bill.

I’m not saying I think NASCAR should have penalized him. I’m glad they didn’t and I think that their announcement of a “formalized” safety rule was more public posturing than anything else. And it’s ridiculous that they felt like they had to do so, considering the issue with Kevin Ward, Jr. that precipitated such a reaction was not in a NASCAR-sanctioned event. It’s not the same situation. Ward was out there by himself when he ran at Stewart’s car, whereas in NASCAR, drivers can barely get the window nets down before the safety crews are rushing over to help them. So if a driver does decide to do something stupid and run onto the racing surface, the safety crew is right there with them.

Hamlin didn’t even do that much. He didn’t run right out to Harvick’s car, within mere inches of striking distance. He stayed within the safety workers’ reach, on the racing apron, and far away from any moving cars. So I don’t blame NASCAR for not reacting.

By the same token, they shouldn’t feel like they have to cave to public pressure when common sense says to go in the opposite direction. It would have been okay for NASCAR to issue a statement such as “While we extend our sympathies to Ward’s family and friends, NASCAR has many different safety procedures that we follow after a driver crashes, and we believe continuing to follow those procedures will be the best course of action.”

Hopefully once this story is long gone, fans can just go back to watching these YouTube moments guilt-free rather than attributing it to a non-related incident.

“I haven’t noticed too many people complaining that the race was boring or anything like that. It wasn’t the best race ever, but it was certainly enjoyable at times. So who do we contact to tell NASCAR and Bristol to LEAVE IT THE HELL ALONE??” Monika

I have one bit of advice for you: Keep screamin’. All CAPS, if you can.

Look, I know it doesn’t feel like it at times, but NASCAR hears you. They don’t always listen or agree with your opinion, but they hear you. And even if they don’t, the tracks sure do, and Bristol knew how much you wanted the old Bristol back.

I felt like it was more than just the track, though. First of all, there was an electricity in the air that I think has a lot to do with the Chase nearing, and that helped with the urgency under green. Plus, tire wear seemed to play a role in some of the pit road strategies and passing wasn’t impossible. It was still difficult enough that a faster car would still have to work for it, but not impossible. That late-race battle between Joey Logano and Matt Kenseth was evidence enough of that. Logano had the stronger car but Kenseth is a more skilled driver. Speed won out of course, as it should, though Logano’s own maturity as a driver certainly played a role.

I’ve talked about balance before, and how aerodynamics, tires, and the racetrack all have to have to be in harmony in order to put on the best show. It’s not an easy thing to accomplish by any means. But I think the Bristol race was a good indicator of what fans are looking for and why I think it’s so important that we have more races like it.

I don’t know what Atlanta will bring, but more of the same would be great.

If a much anticipated movie turns out to be terrible the studio never blames the audience for not showing up. That is because unlike Summer they understand that no one has any obligation to spend their entertainment dollars on anything they do not find to be entertaining. Summer’s fall back position is always blame the fan. No matter how much you try to tell the fans what they should want (you are SO much smarter than them) people are going to do what they find entertaining, period. If enough of the fan base is still bothered by the myriad of problems that effect the NASCAR product they will stay away. Tinkering with a few race dates is unlikely to change that. Wouldn’t it be great if you could force us to see and do things your way. I mean look what happens when we think for ourselves.

The condescending tone aside, I don’t agree that simply moving the Darlington race date back to Labor Day means that fans are responsible for whether it is a success or not. As a long time Nascar fan who lives right up the road from Darlington, I can tell you that a lot of fans who attended the Southern 500 in years past have walked away from the sport for good. There are many reasons and we all know what they are, but at this point it doesn’t matter, most of those folks aren’t coming back. It wasn’t just moving the Labor day race to California that upset the fans, and moving it back doesn’t fix all those other problems that caused folks to quit attending races and even watching them on televison. If moving the race back to Labor Day fails to be effective, Summer, it won’t be that the fans didn’t support Nascar, it will be cause this act of desperation to recapture the lost fanbase was too little and way too late.

For the record, I plan to buy a ticket and be there next September, but I know a lot of my old racing buddies will be watching the NFL instead.

As long as they run the Southern 500 in the evening night, I think it will be a success. I was a Bristol this past week and despite being high 80s and high humidity, it got very comfortable at night.

The only problem with running the race in the early evening is that’s the time most likely for thunderstorms to pop up. Early September is still summer here, and we get a lot of T-storms around dusk. Then you have a small window to get the track dried off to resume racing, or postpone the remaining laps until Monday, or call the race short of 500 miles.

“If only all those evil old fans had just shut their mouths and flown to California for Labor Day weekend like God and the France family intended, everything would be fine now. The racing was always, like, totally awesome, or whatever. Now those meanies have their yucky old race back on the schedule and they’d better attend it every year until they die. Hopefully soon. Ewwww, old people. Gross.”

What in the world is that supposed to mean? I am already a BIG fan especially of Darlington (at least before the repave and downforce mania). It doesn’t matter what my opinion is even though I am a fan? Who are these non participating fans that clamored for a race date return? Sorry they aren’t going to be there no matter what the date is. Is the only thing important the attendance/viewership (in other words $)? france needs to stop worrying about owning the whole world. Isn’t anyone that is already rich rich ever happy?