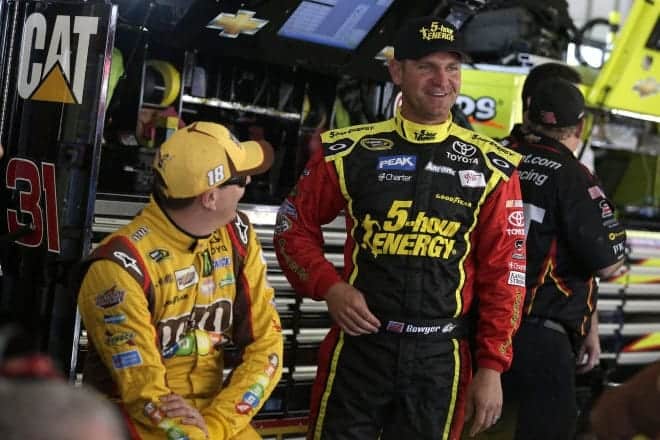 Who is going to crack first?

Frustration is mounting in the NASCAR Sprint Cup garage and there are only three races until the new playoffs start. If Sunday’s race at Michigan was any indication, buckle your seat belts – and stay in your car until a safety worker arrives – because you know what is about to hit the fan this weekend.

There were two confrontations on pit road following the race at Michigan International Speedway, a fast two-mile track where cars get more spread out than Brian France race appearances (they are robust appearances). Denny Hamlin, still with tears in his eyes about his unbelievably slow engine, argued with Dale Earnhardt, Jr. afterward about why he got to drive a Hendrick Motorsports car and Hamlin didn’t.

Then there was the ESPN SportsCenter special beef between Ryan Newman and Jimmie Johnson during which Johnson couldn’t have looked more uncomfortable. Yeah, Jimmie, keep pointing for him to leave like he’s your dog, that should help. And then when he’s said what he has to say and is walking away, ask him something stupid like, “Feel better about yourself,” and then add a line like, “Bring it.”

So there is a really good chance Newman is going to bring his front bumper into Johnson’s rear bumper if they meet. It’s just normal Newman stuff. Watch out, Ryan – he has vise grips.

Hamlin and Newman have one thing in common: Hendrick engine envy. Most of the garage area has it and it’s part of the reason so many drivers are on edge. The Hendrick motor is being talked about like it has magical powers. It might because at some point this summer, it turned Kyle Busch and Hamlin into children. It seems it has some kind of Benjamin Button effect. Busch and Hamlin have been like the two kids who wanted one of those cheap plastic balls from the bin at the grocery store, but their mother said no. They’ve been whining ever since.

If you think I’m being too harsh, think about the last time you heard either one of them speak a sentence without mentioning how slow their engines are.

“I felt like he crowded me off of (turn) 4 in the middle part of the race,” Hamlin said to Sporting News reporter Bob Pockrass on Sunday about Johnson. “We’re trying to make the best we can do down 50 horsepower.”

I’d also like Hamlin to again remind us how much he has overachieved this season, because his car is a big load of crap.

“Frankly, they should be embarrassed that we’re on their rear bumper,” Hamlin said to Pockrass.

I’m sure Earnhardt cried himself to sleep that night. Outside of post-race whining, Hamlin’s kept his composure on the track for the most part, unlike Busch. He’s complained just as much as Hamlin. After finishing second to Jeff Gordon at the Brickyard 400 in a Gibbs 2-3-4 finish, he put on a straight face and complained about his motor.

It proved to be a good sign of things to come. At Pocono, his engine expired, further enraging him one would assume, to provide us with some lovely moments at Watkins Glen. He was irked after the Nationwide race, basically saying he got beat by Marcos Ambrose because Ambrose was racing with nothing to lose. A day later, Busch attempted to pass Martin Truex, Jr. in the middle of the bus stop, and was infuriated that Truex didn’t stop and pull in the grass to give him the spot. Busch boiled over and smashed into Truex in the next corner, damaging his own car to the point he had to take it behind the wall.

After wrecking in the opening laps at Michigan while running mid-pack, I’m sure he will be in great spirits in Bristol.

And speaking of these Hendrick engines, why didn’t Kasey Kahne get one? Were there not enough?

Poor Kahne is out there with a TRD motor running with Casey Mears at Michigan. I’m sure he isn’t on edge at all considering his sponsor was renewed earlier in the year and he wasn’t, and Chase Elliott’s expected Sprint Cup promotion comes right when Kasey’s contract ends.

Oh, and Kahne hasn’t won a race, is on the outside of the Chase bubble and has been the worst Hendrick car by far all year. One bump at Bristol and Kahne is going haywire.

And what about the rest of the drivers on the Chase bubble: Greg Biffle, Clint Bowyer, Kyle Larson, Ambrose, Paul Menard and Austin Dillon. Do you think they’re stressed out? Ambrose already has delivered one mean hook this season at Richmond. Maybe another is on its way.

These Hendrick engines, the Chase — everyone’s more stressed than George Costanza in the offseason. The Bristol night race is going to produce some fireworks.

I am thinking the exact opposite. While the guys with the wins might be willing to mix it up in the name of revenge or frustration, those playing the points game will not be the ones roughing anyone up. I am sure that Newman will just be trying not to have any problems and get a decent finish.

I have thought that the chase has ruined the 2nd Bristol race since it’s inception. Maybe this new format will loosen it up a bit. We’ll see.

First every driver thats not winning is “down 50 horsepower”. Thats not limited to Nascar its in every form of racing.
as far as all the excitement to come, we’ve heard that before. But it never seems to happen does it? We shall see I suppose.

Have you seen what Bristol is doing to get people in the stands? Amazing for a track that used to have a waiting list.

I don’t think anything will happen. The chase and points system (and our PC liberal corporate world) has changed that. Although I would LOVE for Newman to put Jimmie in the wall on the first lap. Now THAT would put buts in the seats.

And if you think Nascar would ever find something illegal in a Hendrick engine you’re a fool. The chance of that happening is the same as the PGA admitting that Tiger Woods used peds.

Loved your article Brett! Thanks for the humor. I can’t help but remember when the Gibbs engines were the fastest and then these guys weren’t saying a thing – I guess it all comes around at some point!

Nascar put a stop to them.

i agree, the article was quite humorous but the bristol night race has to now been neutered by the chase among other things. but here’s to hoping against hope for a good one.