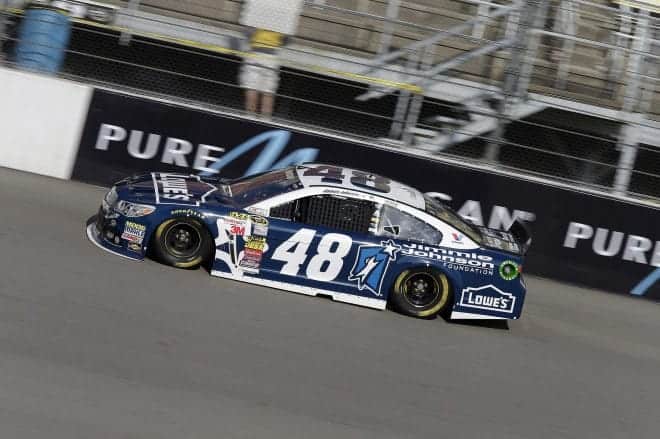 Sprint Cup: A normal race at Michigan for Jimmie Johnson usually means that he runs out of fuel in the final laps after leading for most of the day and having the best car.  Johnson, however, did the other Jimmie Johnson thing at Michigan.  That usually means falling way back in the field and then seemingly arriving like a magician in the top ten as the race comes to its conclusion.

Sure enough, Johnson started in the back, then had Chad Knaus put him into a different strategy, then broke the knob off his shifter, messed around on pit road a number of times, and then finished ninth.  Some people have been wondering about the performance of the no. 48 team during this summer stretch, but really, this kind of race is exactly how Johnson and company have been able to win championships — they ostensibly overcome everything.  This summer hasn’t been about the team running for wins, it’s been about them tinkering with what they’re doing.  Sure looks like they’re polishing that horseshoe.  Huston Ladner

After seeing his fellow rookie competitors like Chase Elliott and Ty Dillon earn their first career wins, Buescher grabbed his own on Saturday in Mid-Ohio. The Roush Fenway Racing made the fuel last on the road course but did more than just luck into a victory. The 60 was one of the best cars on the track, running in the top five behind the leaders throughout the Nationwide Children’s Hospital 200.

Then, when the time came the driver rose to the occasion as he took his No. 60, which didn’t have a scratch on it, and held the competition at bay. Buescher is a long shot for the Nationwide Series championship, but after breaking through on Saturday, he’s become a favorite to grab a few more checkered flags before the season ends.  Kelly Crandall

POWER TAKES CONTROL IN MILWAUKEE: Maybe Will Power does know how to drive ovals.

That’s pretty much the main takeaway from what was a rather sedate race at the historic Milwaukee Mile. Will Power applied his road-racing dominance to an oval this time, and for the third time in the past four seasons, Power is entering the final two races of the season as the favorite to win the championship.

The question of course is, will he actually seal the deal this time? After his performance on Sunday, this writer is inclined to believe so. Milwaukee was supposed to be Power’s weakness, the key obstacle standing in the way of a championship. Nope, not yesterday at least. Power started on pole, led 229 of the 250 scheduled laps, and generally whipped the field in the race everyone thought would serve as his Achilles’ heel.

With his supposed “worst track” out of the way, Power now enters the final two races of the season with momentum, confidence, and most importantly, the points lead. Power now has a 39 point advantage over teammate Helio Castroneves. That may not seem like much, but with the way Power is running, it almost seems insurmountable, especially considering that Power won at both Sonoma and Fontana last year.

As for the race itself…let’s just say it wasn’t as good as Power’s on-track performance. Once again, Milwaukee staged a stinker of a race, and with the series possibly ditching the track in 2015, one has to wonder if the facility will ever host another IndyCar event again. Poor crowds, poor racing, it’s just not looking good for Milwaukee.

Will Power doesn’t care though. He’s on cruise control towards a championship now, and I’m not sure anything could get him down at this point.  Matt Stallknecht

Short Tracks: Sexism or Stupidity, Neither is an Excuse

Race tracks in the Northeast use a handicapping system to set their starting fields. Drivers who win multiple races are forced to start deeper in the field to improve the racing. Dominant cars are forced to pass competitors if they want to get to the front and have a shot to win. Drivers who practice quickly and qualify in the top positions, but who don’t have wins, start at the front of the pack. At least that is how it is supposed to work. At Waterford Speedbowl this past weekend they made a decision that, at least from the outside, looks rather misguided from the impact it had on their public image.

Nichole Morgillo made history at Waterford less than a year ago by becoming the first female driver to ever score a win in the SK Modified division, the premier division at Waterford. She held off no one less than Ted Christopher to score that victory. She is currently 15th in the season standings at Waterford. The attention that Morgillo brought to the Speedbowl with that victory was immeasurable.

The attention that she is bringing now is for a completely different reason. Saturday Morgillo was informed that she would not be included in the handicapping at Waterford if her heat race results would have justified starting her near the front of the field. Waterford Race Director Patrick Williams stated that track officials decided it was in the best interest of Morgillo and other competitors that she not start near the front of the race. Williams said that there had been a lot of wrecks at the front of the fields and, even though they weren’t all Morgillo’s fault  tbey were costing her and her family a lot of money, along with other competitors.

Morgillo left the track quite disgusted with the decision and vowed to focus her racing efforts at Stafford Motor Speedway. The heart of the displeasure was that Morgillo found out from other competitors before she was told by the track. She had come to the track on Thursday to work out a motor problem and fix her car before this weekend’s event. She found out after practice before the heat races. Other drivers who have been involved in wrecks at the front of the pack are not being pulled from the handicap.

On Saturday night, after Morgillo had left the track, the feature race saw Keith Rocco, Jeffrey Gallup, Robert Janovic Jr., and Ed Puleo were all involved in incidents at the front of the field. Rocco, Janovic and Puleo are all in the Top 5 in points at Waterford. The decision may be sexist or it may just be stupid. Whichever it is, it is wrong and needs to be corrected. Unfortunately, at this point, even an apology might not smooth over the ruffled feelings for Morgillo toward her home track.

Frontstretch would also like to extend our sincere condolences to the family and friends of Amanda Gambacorto. Gambacorto was a 21 year-old driving school participant at Wall Stadium Speedway. She lost control of her TQ Midget while following an instructor around the track. She struck the wall and passed away from her injuries. Mike Neff

NHRA: To be continued was ultimately the outcome for the Funny Car and Pro Stock divisions as bad weather plagued the Lucas Oil NHRA Nationals at Brainerd International Raceway in Brainerd, Minnesota. Repeated stoppages for rain and ultimately fading daylight caused the NHRA to postpone the final two rounds of Pro Stock, where Jeg Coughlin, Jr. will take on Vincent Nobile and Jason Line will race Dave River, along with the Funny Car final featuring John Force versus Ron Capps. Those matchups will run during qualifying for the Chevrolet Performance U.S. Nationals in Indianapolis in two weeks.

Top Fuel was able to run to completion with Morgan Lucas going head to head against Doug Kalitta. Lucas gave up full time competition after last season to focus more on his family business, event sponsor Lucas Oil, making only occasional appearances on track this year aside regular team driver Richie Crampton.
They say go big or go home and that’s what Lucas did, defeating Kalitta even as his dragster erupted in a ball of flames at the finish, with a time of 4.88 seconds at 229.55 mph to Kalitta’s 4.987 seconds at 256.16 mph.
“I knew it was hurt, but it’s the final. You don’t leave anything on the table. You just go for it,” said Lucas. “”It lit up. That was actually cool. My 2nd thought after ‘we just won’ was ‘this is going to make some great TV.’ The first thing I said to my dad was, ‘I blew up a lot of your stuff.’ He said, ‘I know, but I’m smiling about it.’”
Three of Morgan Lucas’ ten career wins have come at Brainerd. The reward for winning your family sponsored event? Lucas’ mother, Charlotte Lucas presented her son with the Wally for the victory.  Toni Montgomery

John Wes Townley was injured in a practice crash at Pocono Raceway at the beginning of August. With the ARCA series heading to one of their two dirt tracks this weekend, the folks at Venturini Motorsports went looking for a shoe who knew how to get around on a dirt surface. A driver with four Chili Bowl titles on his resume seemed like an obvious choice. Kevin Swindell did not disappoint, putting the No. 15 Zaxby’s Toyota in Victory Lane for the ARCA powerhouse.

Swindell received a call on Tuesday inquiring about his availability for the weekend. With no race on his itinerary he jumped at the chance to run one of the best cars in the ARCA series at the legendary Springfield Mile. The route to the win was not easy. Swindell made contact with the wall during practice and the race, along with some of his fellow competitors, but the car remained strong for the entire event.

Swindell led the final 11 laps and held off hard charging ARCA point leader Mason Mitchell for the win. Grant Enfinger led the most laps during the 100 lap event before ultimately finishing third. Enfinger had not run a dirt race since 2011. Frank Kimmel and Will Kimmel rounded out the Top 5.

Qualifying was rained out which meant Kelly Kovski, who was fastest in practice, was relegated to a 27th place starting spot. Kovski quickly carved his way through the field but ultimately only came home with a sixth place finish.

The series next stops at Madison International Speedway this coming Saturday before returning to the dirt at the DuQuoin State Fairgrounds for another 100 mile race. Mike Neff

Gee, do you think Chris Buescher’s win could have something to do with his racing with his peers and not five Cup drivers?