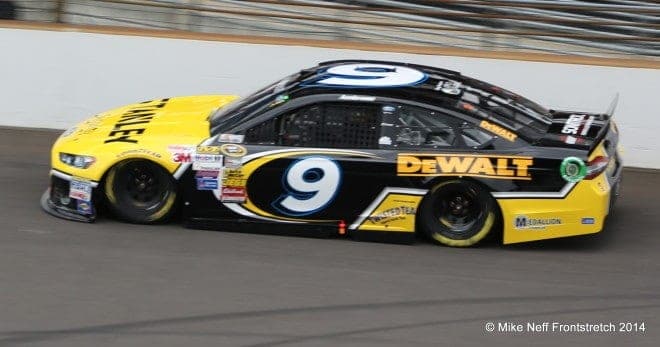 A win from an underdog is the worst possible outcome for the slew of drivers floating around the playoff wildcard bubble, and that’s exactly what happened at Watkins Glen International Raceway.

Carl Edwards was able to fend off the road course specialist in Sonoma earlier this year, and while close to doing so again at the Glen, Edwards instead played the role of bystander as two of Cup’s best road racers fought for a Chase berth.

The NASCAR Sprint Cup Series now transitions back to ovals for the final time during this all-important stretch, for which the next stop is Michigan International Speedway. Ultra-high speeds and complex pitting strategies were major themes in June’s visit to the Irish Hills, where Jimmie Johnson added his third victory of 2014.

Johnson will be looking to break out of a career-worst slump by adding a fourth; but, as this edition of Who’s Hot and Who’s Not shows, there are others, who are desperately searching for Victory Lane with only four regular season dates remaining.

AJ Allmendinger is Hot or Not’s latest flavor of the week.

Much like Aric Almirola, who paved a path into the Chase in Daytona’s Big One(s) and rain-riddled Coke Zero 400, Allmendinger is a one-trick pony in comparison to Cup’s more well-rounded, top-flight talent.

Luckily, for him, oodles of road course racing talent were perfectly in play at the Glen last Sunday.

After watching Allmendinger tame the field, it become clear why he was so absurdly pissed off after wrecking his chances of glory in wine country: he’s really, really good at this turning right thing when given favorable track position. Edwards and Kurt Busch weren’t even close as Allmendinger pulled away into the heart of the playoff picture.

When the series unloads for the Pure Michigan 400 it will become clear why Allmendinger stands in the same class as Almirola, however: Allmendinger is extremely ordinary outside of upstate New York. At MIS, multi-car, big-money organizations will again outgun JTG-Daugherty Racing, led by drivers like Kevin Harvick.

The Stewart-Haas Racing superstar serves as a poster boy where Allmendinger likely drops back into orbit. When the two-mile speedway’s overriding characteristic, world-class speed, is brought into consideration, Harvick stands as the embodiment of excellence. His keen ability to drop the hammer routinely keeps the No. 4 Chevrolet near the top of the practice charts. His lead foot is so heavy, in fact, that it has begun to compensate for his team’s worst attributes: bad luck and human error.

Harvick overcame an unscheduled stop, caused when several bean bags (used to simulate a driver’s weight during pre-race inspection) slid into the floorboard, to finish seventh at Watkins Glen.

Harvick’s fiercest competition is most likely to come from drivers yet to grace the winner’s circle, drivers who are trending upwards in these crucial times, namely Greg Biffle.

A major reason for Biffle’s recent upsurge is the aggressive play calling of crew chief Matt Puccia. The veteran box-topper has begun pulling out all the stops to compensate for Roush Fenway Racing’s company-wide lack of horsepower. Intensive Sunoco strategy has fueled Biffle’s run of two straight top 10s.

First there was Pocono, where Biffle briefly fended off other more aptly prepared drivers using nothing more than his nearly-empty fuel tank, and then again at the Glen, where he used the same hand to accomplish a similar result. Gut calls like these often come in handy at Michigan, which has established widely known reputation for such endgames.

With the No. 16 team’s affinity to fearless calls, Biffle has yet another trick up his sleeve, but his numbers in the Great Lake State serve as the primary means for his inclusion in this week’s Hot or Not. It’s not as if Biffle’s average finish of 11.6 is bulletproof, but he’s never DNF’d and his four wins (delivered in sets of two) are impossible to ignore.

Don’t ignore Kyle Larson either. Not that it’s possible (with the large target on his car). A stale joke aside, Larson clearly isn’t joking around. The rookie continues to up his game all while the stakes continue to rise (illustrated by his fourth). What’s more impressive is way he did it at the Glen: by exhibiting a closing ability on par with Cup’s best.

Next, Larson gets another shot at Michigan, the site of a seventh in round 15 and the high-water mark for him in the standings (seventh) to this point.

On the other side of the Hot or Not gamut, drivers who couldn’t make it through 90 laps of racing at the Glen without something going horribly wrong, or those who couldn’t take advantage of a favorable opportunity to gain a Chase birth, populate the ranks.

Joe Gibbs Racing faces a pricey repair bill after two of its drivers brought their Toyota Camrys back to the shop in less than mint condition.

Kyle Busch has his temper to thank for back-to-back finishes of 40th or worse. Busch appeared to let his legendary anger get the best of him after his gasman was unable to pull the fuel can from the car before the No. 18 pulled out of the stall. Following the impending pass-through penalty, Busch got together with Martin Truex, Jr., angering the No. 78 Chevrolet’s driver enough to induce significant damage to Busch’s car.

A lapse in Busch’s composure like this, even if temporary, is the last thing he needs during the Chase, where consistency will take the place of raw winning ability.

Busch’s statistics at Michigan since winning in 2011 don’t help his case either. He finished 41st there earlier this season during a weekend which he seemed more focused on sparring verbally with Kasey Kahne.

Five finishes of 20th or worse in the last six trips to MIS don’t bode well for his chances of rallying without crew chief Darian Grubb.

Fortunately, for JGR, Busch and Hamlin are all-but guaranteed spots in the Chase as long as they attempt the remaining regular season dates, with Matt Kenseth safely leading the way in the wildcard pool. Many organizations cannot say the same for their drivers.

Richard Petty Motorsports’ Marcos Ambrose missed perhaps his last great opportunity to join teammate Almirola in the playoffs. Ambrose wasn’t just a favorite to win at the Glen; he was the favorite. Las Vegas odds makers pegged Ambrose as the most likely driver to win at Watkins Glen and earlier this year at Sonoma, but he failed to come through on both occasions.

While the runner-up finish boosted him to 16th in the standings, it’s still very far from what Ambrose needed. He’ll now have to rely on run-of-the mill oval skills to pull even with those on the inside of the Chase bubble.

Tony Stewart didn’t race after his involvement in the tragedy that took place at Canandaigua Motorsports Park Saturday night. It’s a shame because Watkins Glen was a historically favorable matchup for Stewart.

With no timetable for a return to Cup action its unlikely that Stewart will be a factor in the Chase, or the races leading up to the 10-race playoff, and with 95 points separating himself from Clint Bowyer, the final wildcard placeholder, Stewart needs a win more than ever – if he even returns to his car anytime soon.

What you wrote about Harvick and Almendinger is true of course, but its very easy to like Almendinger while Harvick is my choice for biggest jerk in Nascar.

methinks the praise of Harvick is way overboard..ugh.Great race at the end..Go AJ!

Ambrose cold? Tell me that I read that wrong.