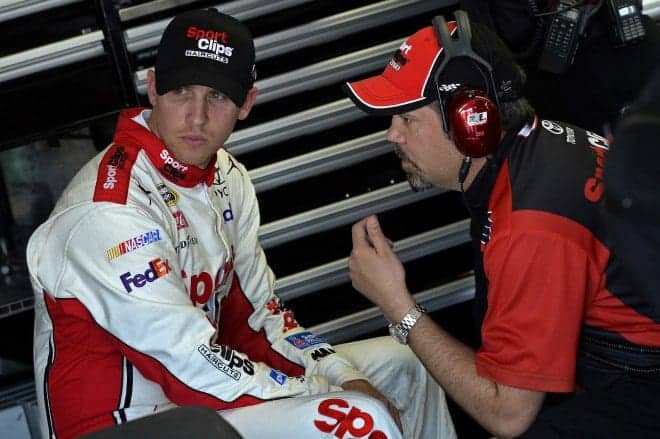 Engineering the Future for Junior

The big news that came down yesterday was the announcement that Greg Ives will be the crew chief for Dale Earnhardt, Jr. in 2015. The move comes well ahead of The Chase to avoid any distractions for the driver who will experience a rebirth under current crew chief Steve Letarte. Letarte, of course will be leaving at season’s end to join NBC Sports as a race day analyst. Many have seen him as more of a crew psychologist, having been the one voice atop the pit box since Tony Eury, Sr. that could calm, motivate, and inspire the driver who had drifted off course during the 2008-10 era.

So why Greg Ives? When many heard the name they may have thought, “The guy who sang Have a Holly Jolly Christmas?” No, not Burl Ives – Greg Ives was the lead engineer during Jimmie Johnson’s improbably run of championships from 2006-10. An engineering mind with five titles under his belt, Ives was tasked with helping to get Chase Elliot up to speed in his what has been a remarkable rookie season in 2014: three wins and leading the points, and this just two months after graduating high school.

With that said, can he continue what has been the Junior Renaissance of 2014?

While the new Chase format has yet to be tested, the regular season performance of the driver and the No. 88 team has been nothing short of remarkable. A win in the Daytona 500 and Pocono 500, and three runner-up finishes to boot. The driver who used to sound out of sorts and flustered trying to explain away a Top 10 finish, now appears perturbed and annoyed if they aren’t contending for wins or able to get the car to drive and feel as he thinks it should. As he approaches the eve of his 40th birthday, he knows now is the time for him to make hay, and well he should: Jimmie Johnson isn’t going anywhere soon and has three wins so far this year, and oh no, don’t look now, but Jeff Gordon is suddenly performing like Jeff Gordon again as well with a pair of wins and his fifth Brickyard 400 victory this past Sunday.

Ives arrival also hints at the plan to get Chase Elliott a bit more time in Nationwide before moving him up to the Cup Series. Cup is a different animal than Nationwide, and not every driver and crew chief combo that works in Nationwide can thrive in Cup. Earnhardt, Jr. and Eury, Sr. along with Robby Reiser and Matt Kenseth may have been the exception – but that was 15 years ago, and what else in the sport from that long ago has reminded the same since? When Elliott does come to Cup, I think you’ll see  him paired with a veteran crew chief to help guide the face of Hendrick Motorsports into the future.

For now however, the current face of the franchise – and the entire sport –has a bright young engineer with five titles to his credit, as well as a glimpse into the inner-workings of the No. 48-88 shop. While Steve Letarte has had a view into the inner-workings of Dale Earnhardt, Jr. Greg Ives insight into Chad Knaus may prove more beneficial in taking the next step in the evolution and elevation of the No. 88 team.

So what of this penalty for Denny Hamlin – or more so, Darian Grubb – and the No. 11 Joe Gibbs Racing team from Indy? It was a trick similar to that seen at Daytona in 2007 when several crew chiefs were fined for drilling holes in the trunk to help evacuate air from the cars and get them lower to the ground, Hamlin’s car was found to have unsecured sections of the rear firewall between the trunk area and driver’s compartment. Hamlin was a bit flustered during practice on Saturday, but looked like a contender on Sunday before a botched fuel stop undid their strategy – so it appears whatever they were working on, worked.

With Grubb out for six weeks, just what does it mean? To be honest, it might end up being a blessing in disguise.

If he serves the six week suspension starting now, he will be out through Richmond, the final regular season race, but back for the first Chase race at Chicago. Might this time be best spent at the shop building cars and preparing for the first three races of the new elimination format? The team has found momentum in recent weeks, with finishes of sixth, eighth, and third. The team finished fourth at Pocono in June, the site of Hamlin’s first two Cup Series wins, and four overall. Of the next six tracks, Hamlin has a win at all of them besides Watkins Glen; there’s not road course in The Chase (yet…), with a win in the bank at Talladega, and first three races of The Chase being of utmost importance, the self-imposed exile brought about by the Brickyard penalty might end up being just fine for Grubb and Hamlin.

Besides – at least now they know what NASCAR is checking for…

Kahne led 70 laps at Indy, and appeared that he was going to get his season on track just in the nick of time, but was felled by Four-time in the closing laps, as Jeff Gordon captured his fifth Brickyard 400. Stewart-Haas Racing semi-teammate Tony Stewart ended up 17th, but had things in hand at Pocono this past June before he blew through the pits at a speed so amazing, none of his warning lights even tripped.

Greg Biffle however might be the most vulnerable of this group, despite just being elevated to Veteran Leader status at RFR, with the departure of Carl Edwards made official in an awkwardly timed pre-race announcement at Indy this weekend. Biffle has been the mouthpiece for Roush Fenway Racing in recent years, though has 0 wins this season, his last win coming over a year ago last June at Michigan. He currently finds himself just 18 points ahead of Brian Vickers in the 16th points position, and having scored just two top 10 finishes in the last ten races – a second a Talladega and a ninth at Sonoma. With the series done on plate tracks until The Chase, and only Watkins Glen as a remaining road course, it’s going to be nail-biting time for the No. 16 team in the coming weeks. A test at Michigan last week was reportedly successful, and Jack Roush puts a premium at performing at MIS, so expect that race there in a few weeks to be their Hail Mary moment to help capture a Chase birth, and soothe the wounds of losing their most productive driver of the past few seasons in not just performance – but as a sponsor magnet as well.

Why bother to check at all if penalties are meaningless. While a $150.00 speeding ticket might slow me down it would be meaningless to a millionaire. Why not cheat if getting caught has little to no negative effect? What am I missing here?

From another outlet, we were blessed with a Hendrick crew chief’s opinion of the penalty. Now that we have it from the most important perspective, there is nothing else to say. At least until we need to know about the appeal result.