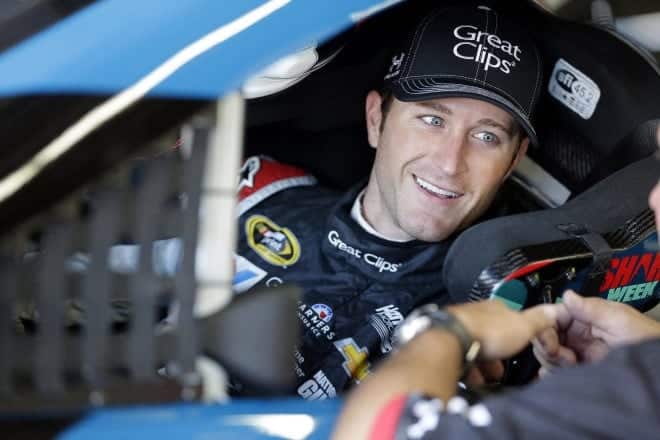 Say what you will about the NASCAR Sprint Cup Series schedule — no, really; there’s a lot to say — but one thing it’s been as of late is consistent.

As the series comes off its final off-weekend of the 2014 season, there are but 17 races left in the season. A quick glance at the final rundown notes that it’s quite comparable to 2013’s final 17 races.

In fact, in terms of order, it’s exactly the same.

Particularly, the seven races left in the regular season — Indianapolis, Pocono, Watkins Glen, Michigan, Bristol, Atlanta and Richmond — are in the same order this year as they were last, giving onlookers a fairly simple way to place their bets on who’ll be left standing after Richmond, heading into the Chase.

Of course, 2014 has a bit of an added scenario: win and you’re in. There’s seven races left for five spots in the postseason, and just one win for one of the 30-some drivers running the full season that don’t have victories yet changes everything — granted they’re inside the top 30 in points, of course.

One such driver who has to be a favorite over the last seven races is Ryan Newman.

We’ll not touch on the driver of Richard Childress Racing’s No. 31 for too long; after all, this column zeroed in on Newman last week, noting that lately he’s been excelling, perhaps peaking at the right time as he tries to drive his way into a Chase berth.

Last year’s stats only further that prediction. Among drivers who ran in the Sprint Cup Series in 2013, Newman was one of six winners in that seven-race stretch, and easily one of the best drivers during that period. In addition to the win, he rattled off four top-5 finishes, a number bested by no one else and equaled only by Kurt Busch.

In the way, it’s completely within reason to expect Newman in the Chase by the end of Richmond. Even if he doesn’t score a victory — and he might, as the defending winner at this weekend’s Brickyard 400 — he’ll be sure to be near the front.

Newman isn’t the only one with a win in this seven-race run last year that need one in 2014. Both Matt Kenseth and Kasey Kahne won last year — the former at Bristol and the latter at Pocono — but find themselves outside of victory lane heading into the Chase.

Not that Kenseth’s sweating it. The driver of the No. 20 is currently the highest-placing driver in the standings without a win in fourth, practically a shoo-in even if he doesn’t win. It’s hard to argue against his season so far. That zero in the win column is the only thing keeping him from being an oft-discussed championship contender.

Kahne, however, should look at last year’s stretch as a beacon of hope. He drove into the winner’s circle last year and scored three top 5s, plus four top 10s. He desperately needs another run like that; currently, he’s not locked into the Chase, sitting 17th in the standings. In fact, he has three — Austin Dillon, Kyle Larson and Greg Biffle — still ahead of him before he can even consider a Chase berth without a win. Another solid string of top 5s would help his argument for a spot, but it’s a win that would be the end-all, and he’s one of only a few that did so in the final weeks of summer last season.

Along with the win hopefuls like Kenseth, Kahne and Newman, it’s important to keep an eye on some others who could end the regular season on a high note. That includes Joey Logano, who was arguably NASCAR’s best during this stretch last year with top 10s in all but one of the races, plus a win and three top 5s. He’s already locked in with his two wins, but sitting ninth in points isn’t tossing him into the main conversation. That all could change here.

He’s joined by Busch — actually, both Busch brothers, for that matter. Kurt Busch didn’t win last year, but he did score four top 5s and five top-10 finishes, a feat that, if equaled or bested, would jump him some spots in the standings and deem him more worthy of a Chase spot than many currently consider him as being a legitimate contender, instead of an underwhelming presence — he’s still only 25th in points, after all. Kyle Busch, on the other hand, is already soundly in the Chase, but was the only driver in 2013 with two wins during this final stretch in summer, scoring wins at Watkins Glen and Atlanta.

Martin Truex, Jr. and Paul Menard. Keep on that duo, too, as dark horses who had solid outings last year and could make their way into the Chase quietly but efficiently.

The final seven races before the Chase are sure to be some of the most high-profile, high-energy, high-stakes events in some time, given the added bonus of winning and suddenly vaulting into the Chase. But it’s still important to remember who ran their best at these tracks in 2013. Keep an eye on drivers like Newman, Kahne and Kenseth as we near Richmond. If it’s anything like last year, they’re going to be making their voices heard.

No offense, but the experts guess, excuse me, predict wrong about 90% of the time. Excepting of course the Trucks and NW events, but really, those are just extended Cup practice, not even racing really. The fact that JJ can blow tires and Harvick can blow a head gasket (pun intended) always leaves the outcome immune to even the best analysis.