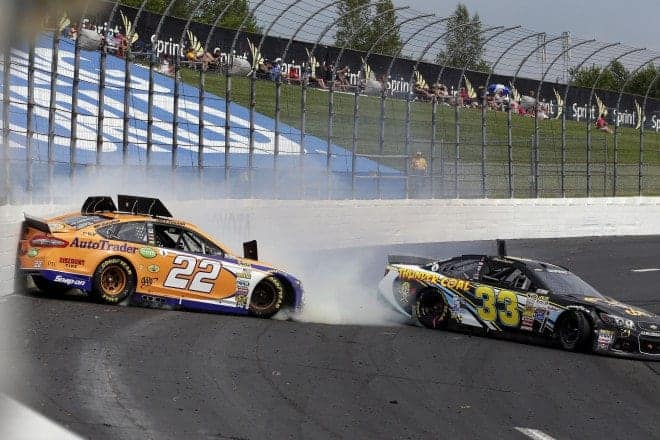 Wow the kids sure got angry over the incident with Morgan Shepherd and Joey Logano this Sunday at New Hampshire! Not sure why – between this and Jimmie Johnson blowing two tires in less than 15 laps, it was the only real action of the day. Logano’s ire was understandable, though the age issue seemed to be more of a media generated story due to Shepherd being 72 years old. I have but two points to make on this one, and we’ll let it go.

One: He is a Nationwide Series regular (though sponsor funds have curtailed his participation the last couple of years) and has no issues with anyone – including Logano, who races in it quite often.

Two: Is it possible that the car was just THAT big of a turd and was the reason why he was nearly 15 mph off the pace?

It might have had a No. 33 on it, but it wasn’t the Richard Childress Racing No. 33 – it was owned by Joe Falk and sponsored by Thunder Coal. So far this season the car has an average finishing position the same as its sometimes-driver David Stremme: 37th. Shepherd finished 39th Sunday, his wreck notwithstanding. The issue isn’t with the driver – the car was just that bad and Logano caught him at a bad part of the track. If the car came around at that speed, imagine how much mechanical grip it didn’t have.

Morgan Shepherd has done more with less the last few years, to the point where he had made it known he was going to have to help pit the car himself due to lack of funds and man power. He has four Cup Series wins in his career as well – not too bad of a success story for a guy who as an adult was illiterate and learned to read later in life. He has been an inspiration for many and competes as well for those who are unable to, including a friend of his who was hit by a drunk driver.

Oh and for what it’s worth, nobody seemed to have a problem with James Hylton contending in all 21 ARCA races last year at age 78 — and hasn’t John Wes Townley made a career out of that same sort of thing?

It’s for sure been a rough year for Roush Fenway Racing. Persistent rumors of Carl Edwards and/or Greg Biffle bailing, Ricky Stenhouse, Jr. running worse than last year – and that’s just the Cup side of the coin. In Nationwide, Ryan Reed was wrecking early on with the sort of regularity that would make Travis Pastrana blush, while Trevor Bayne has been consistent – just not spectacular – scoring just two top-5 finishes in the first 17 races. Edwards did win at Sonoma, however it’s his only top-10 finish in six weeks. Biffle has been no better, with just one top 10 (barely – a ninth at Sonoma) in over two months. Stenhouse has had similar suck-cess, with a 10th at Talladega the first week of May, and a ninth this week at NHIS.

When the Penske cars are winning every other week or in contention for wins, and the Roush cars are routinely praying for Lucky Dogs, caution flags, and looking for something in the interior to rip out and deposit onto the track, the team that was once the standard bearer for the Blue Oval has fallen on hard times. It’s not something that is going to get fixed overnight, and should another one of their A-listers jump ship as it looks like one will, the long row to hoe is going to take a few more circuits to dig out of.

Talk to My Lawyer!

With the announcement of the Race Team Alliance (hereafter to be known as RTA), the not-a-union of the major race team owners last week, NASCAR was nonchalant in its response, and made it be known it was willing as always to listen to and work with the owners and teams to find mutually beneficial solutions. On Tuesday it was made known that the only communication that the RTA would be having with NASCAR is through their respective legal teams.

Well, how could anything possibly go wrong?! After all, isn’t this just a group of guys trying to get a group rate at the Super 8 and a bump up from coach if there’s room on the plane? The perceived power struggle that many had predicted with the formation of this group is going to turn real. I can only imagine what will come the first time a grievance is aired, be it regarding the cost of proposed engine changes, the substance abuse policy, or the next time a Goodyear tire is flat on the bottom. On the surface it sounds like the real drama won’t be on the track next year, but possibly in briefs, complaints and other legal wrangling.

Our society grows exponentially more litigious as time goes on. Usually this is a bad thing as we just never seem to be able to settle a dispute without someone calling a lawyer. My father used to say if there is one lawyer in town he walks, if there are two they both drive Cadillacs. But sadly sometimes lawyers are necessary. Just suppose a group is trying to do business with a third or fourth generation tyrant. And, just for the sake of argument let’s say this particular tyrant is the not too bright spawn of generations of selfish bullies that believe that the earth was created so that they would have some place to stand. Maybe, just maybe calling the lawyers is really the only alternative to serfdom here. It is time for NASCAR to become a real sanctioning body and not the plaything of the Royal France family.

I agree with your comments about the Morgan Shepherd issue. He’s been driving terrible cars for years and Logano should have been aware of it — especially if he knew that car was slow. Instead Logano decided there was no need to use caution but just couldn’t use a little patience to clear the car and paid the price. Crap happens on the race track, we see it all the time and Logano has had his fair share of being the one doing the wrecking.

If I was part of the RTA, I’d want to use the lawyers to talk to the idiots at NASCAR. There have been far too many examples of NASCAR/ISC getting away with things because they are a monopoly. Not sure if the RTA is a good idea or not, but given Brian France’s idiotic decisions, which have cost the teams huge sums of $$ (which is what this is all about in the end – money), hopefully someone can make this about racing again instead of “what version of the chase are we going to use to decide a champion this year?”

The only things we really know about the RTA is they aren’t interested in a better deal on the Thursday night buffet, or the issues of the groups that fill the back of the field. So what are they really after, that is the question?
Despite wishful thinking on some people part I doubt if its a coup against Brian France, or a drastic revision to the racing.
So again what do they want, and why did they feel they had to create a “business group”? One suspects that this is much more complicated than just TV revenue sharing..

Russ, Your observation rings true. The RTA probably has no more interest in producing a quality product or pleasing fans than the Royal France family has. I really hope (springs eternal) that you are wrong.

I think Helton pretty much shut the door last week making a comment about what I understood to
be dealing individually only. I think from here on out it’s going to be the tail wagging the dog and NA$CAR is going to suffer from their my way only attitude. There is enough money behind the RTA
for those folks to start their own circus without Brian and his monkeys.

Makes a person wonder just what ole Bruton Smith is thinking about all this RTA stuff. He must be gleefully chuckling about it all. Ole Bruton has had his run-ins with the France family in the past. Remember sometime back there were some rumors flying around about a split in the Cup Series with Smith starting a competing series. I thought it was odd that Smith was in “Victory Lane” hugging the winner on Sunday. He had his hand on Keselowski’s shoulder before he was even finished being interview by TV! When’s the last time we’ve seen that?

Bruton Smith came down hard on the RTA a week ago, saying it was going to be bad for the sport. He may not like Beezee France and Nascar, but he loves money. The thought of team owners taking a bigger slice of the overall pie probably has him pitching a royal Scrooge McDuck temper tantrum.

If you ask me, having all the communication take place through lawyers sets an ominous tone for the future dealings between these two entities. NASCAR may have said that “they have no animosity towards the RTA” but whipping out the lawyers at this early stage doesn’t align with those sentiments. Seems more like NASCAR is taking a defensive, digging their heels in, stance.

This might actually get to be more exciting than the racing has been. LOL

Nascar takes 10% of the tv money, and the France family owns 17 out of all the race tracks and the tracks take 65% of the money, leaving 25% for the teams who have to spend a ton of their money on everything mandated by Nascar(France), PLUS, Nascar continues to steal sponsorship the teams must have in this money oriented sport. For sure not a fair split.
So Biffle at age 44 is considered an “A” team driver ! After all the talk Biffle was spewing this spring about him having options and that he was near to signing a contract with Jack, all talk has stopped by the Bif as he realizes and hopes Jack doesn’t go with the youth movement because there isn’t a quality ride out there for Biffle. With Home Depot leaving I don’t see JGR trying to sign two faced Carl for a 4th car, and for sure Matt, Kyle & Denny have lobied Joe to not sign ol Carl and disrupt the harmony on that team, so after Penske said he wasn’t interrested either, where does that leave ol two faced Carl ! Back with the cat in the hat is where. Stenhouse just might be looking at becoming a nationwide regular after this season because running with Danica for 28th spot isn’t going to cut it for two straight years, not when you look at how rookies Larson & Dillon are running circles around him. Heck Jack isn’t even going to all the races this year, opting to spend more time with family and good for him.

The lawyers are already in action. WOW. This is NOT good. No healthy relationship operates this way. It almost guarantees more bad blood and trouble.

Congratulations Nascar and Brian France. A once incredible sport has fallen to this level.

I hope Carl doesn’t schedule an hour TV show to tell us in fifteen seconds where he’s taking his talents.

ESPN Classic Canada is showing a 1990 race from Michigan on Friday at 7.. It will be nice to see real race cars and racy drivers.

…..and no fake debris cautions.