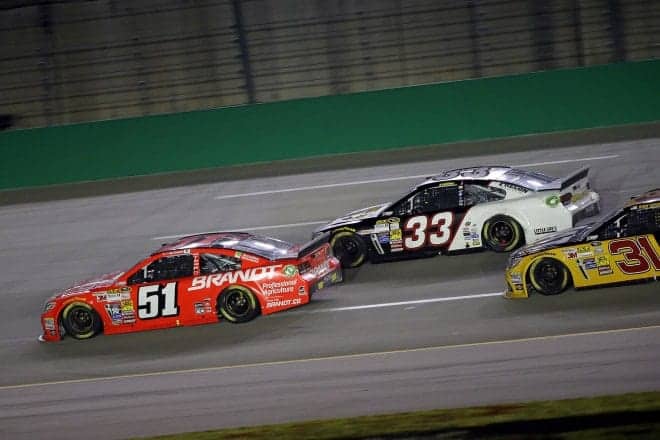 Did You Notice? … The lack of passing on Saturday night? Kentucky lived up to its reputation once again this Saturday, and that reputation is not a positive one. The track has, quite frankly, been maligned since it joined the circuit in 2011. The inaugural event was plagued by horrific traffic problems due to a lack of proper infrastructure, and the on-track racing product since then has been just as bad as those traffic problems. Sunday’s race only featured 12 lead changes, an embarrassingly low number when you factor in green flag pit stop-related lead changes and such.
The stands this past weekend certainly seem to reflect this apathy towards the race track. The stands were half full at best for the Cup race, which is rather shocking given the fact that so many people went to the race in 2011 that some couldn’t even get into the facility.
Many have tried to spin this story in every way one can imagine, but this one is not hard to deduce. When a fan’s experience at a race track is as bad as it was at Kentucky 2011, you can’t expect people to want to go back for more. And when you throw a bunch of bad races following the traffic disaster into the equation, the question doesn’t even really merit a response.

Kentucky Speedway is simply not fit for Cup’s brand of racing, both on the race track and in the front office.

Did You Notice? … The continued improvement and performance of rookies Michael Annett and Justin Allgaier? These two guys have honestly impressed me thus far in 2014. With guys like Kyle Larson and Austin Dillon driving high-profile/high-dollar rides this season, the rest of the rookie class was understandably overlooked. But the reality is that Annett and Allgaier have arguably been just as impressive.

Neither Annett nor Allgaier drive for well-funded teams. Tommy Baldwin Racing and HScott Motorsports, while certainly on better financial footing than they perhaps ever have been, are still teams that are at a serious lack of resources and engineering. Thus, the fact that Annett and Allgaier have consistently been able to challenge for top 15s and top 20s each week is impressive. As their team’s improve, they improve, and it makes each team fun to watch on Sundays.

Annett in particular had perhaps the finest run of his young Sprint Cup career Saturday night, finishing a respectable 18th and running inside the top 15 for much of the race. Allgaier has been impressive on other tracks, and has consistently been a factor in qualifying every week as a mainstay in the top 24.

So, as much as you may be tempted to keep your eyes on Larson and Dillon, do not rule out Annett and Allgaier going forward.

Did You Notice? … Some quick hits before we go…

– Would you all agree that Team Penske is the primary contender to Hendrick Motorsports before we embark on the Chase? The Penske cars of Brad Keselowski and Joey Logano put in the most dominant performance in recent memory on Saturday night, and each has been strong all season. I remarked in Four Burning Questions this week that the drivers who were strong at Kentucky would likely be strong in the Chase, and I even predicted that the Penske brigade would dominate. The Penske cars seem to have the best balance on 1.5 mile tracks right now and that advantage doesn’t seem to going away anytime soon.

– Could this Saturday night’s Coke Zero 400 be the best edition of the summer classic in recent memory? This year’s Daytona 500 was an absolute thriller of a race, and was easily the best Daytona 500 in a long while. 2014’s plate racing package seems to provide a nice balance between handling, drafting, and exciting pack racing, and the plate races have returned to being the exciting events they’ve always been known for. This Saturday night’s race is thus primed to be the best Coke Zero 400 since at least 2010, especially given the fact that the last 3 Coke Zero 400s have been snoozefests.

Your comment about fans bad experiences at Kentucky leaving them less than eager to return for more could really be a commentary on the across the board NASCAR experience. Lower series that are not even racing anymore and the myriad of issues that plague the Cup races certainly contribute to the free fall attendance numbers.

Not only were the stands half empty, the TV ratings were down 12% and the lowest ever for the face. I “watched” the race but there was nothing interesting to see so I slept and worked with my computer. I will find something better to do next year and not waste my time with this race. On the bright side, the attendance should solve the traffic problems

Yes, it’s not good. I’m interested to see what happens next year with nbc. It will probably go up in ratings with people just checking it out. But if nascar doesn’t change then people will go away again.

Yes, the Penske teams are contenders for now, until they’re found working in one of the Hendrick-only gray areas, and then NASCAR will need to “police the teams” a bit more, like last year.

YES, EXACTLY!!!!!! It’s ok for chevy to win 2/3rds of the races, but if Ford or Toyota do it then red flags go up and nascar goes fishing until they get a catch.

Toyota has won every truck race this year.

Talking Cup ’cause the trucks are all but dead. ( thanks nascar)

No surprise that Toyota is winning all the truck races since they make up about 3/4 of the starting grid. Is there anything more exciting than non competitive one foreign manufacturer “racing”! Ditto Manny, thanks NASCAR.

I would like to ask–Why are the Penski Fords so much faster than the rest of the Fords?

Why is the 48 so much faster than the other chevy’s/Hendrick cars?

I watched the Indy race from Houston on NBC Sports Sunday and can tell you their coverage won’t
be any different than the existing networks. Directing techniques are the same. No continued pan of
the starting cars; over use of on-board cameras, and the old zoom in, zoom out. This is bad enough
on oval tracks but becomes terrible on a street course. The ratings will be in greater free fall in 2015.

did i notice?
nope, wouldn’t have watched if you paid me.
I won’t notice anything from Chicago”land” either.

Not a good week last week for NASCAR. First, Home Depot put a mercy killing to its already dwindling NASCAR presence. Then, a short field started the race for the first time in over a decade. Those souls who half filled the speedway saw but 3 leaders with most of the passes for the lead occurring during green flag pit stops. Those few that watched it on TNT, besides being treated to no passing on the track, were also treated to the continued audio/video glitches that have plagued most of the lame duck network’s broadcasts, as well as a lot of commercials mixed in with occasional racing. Oh, and I forgot, I think the track safety crew is just now getting to Denny Hamlin.