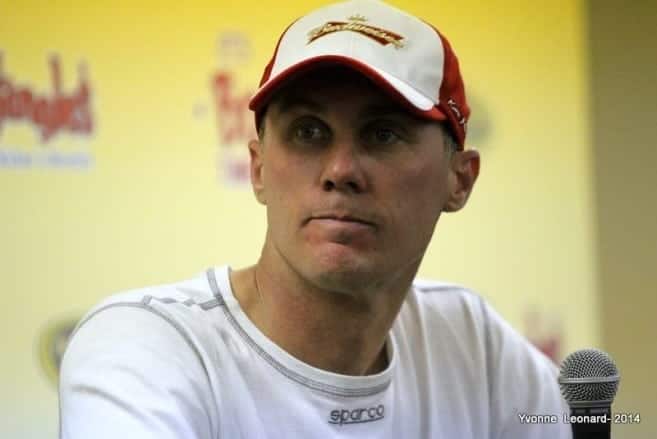 Kevin Harvick wasn’t exactly what one would call chatty following this past weekend’s race at MIS. For the second time in three weeks, the No. 4 Budweiser Chevrolet was the fastest car on the track when it counted – but was too far back to do much following more problems in the pits. While you can’t really blame him given the ludicrous speed his Rodney Childers prepared SHR cars have been this season, the pouting and public pitty-party are neither the mark of a championship winning driver – or team. We’ve seen this before from Harvick at Richard Childress Racing. The constant berating of the crew, even in seasons where they were winning, eventually led Gil Martin to hide in the shop away from the drama. He was brought back to help make the car competitive again at RCR which it was – but even as Harvick was on his was out last season, he got in a well-publicized dig on the Dillon Brothers after an incident in a Truck Series Race at Martinsville. While Harvick and the No. 4 car seem to be the only ones who can consistently match the speed of the No. 48 – and often exceed it – the driver does need to swallow a little bit of pride and ego.

Yeah, losing sucks, particularly when the competition is heating up and they’ve realistically thrown away three wins, in addition to a number of mechanical failures in the quest of that speed that they continue to display week in and week out. As the season drags on through the dog days of summer, a cheerleader is going to be needed more than the petulant mouthpiece going off every time something goes awry. They’re in The Chase and if it’s the championship that is the focus and not racking up a couple more wins (unless he has some sort of performance clause in his contract that is costing him big money), some words of encouragement and motivation will go a long way in September and October if voiced now, rather than showing the mental weakness that Chad and Jimmie know how to exploit from the competition.

Besides, one of these days the crew might just jack the car up, take off their helmets, and beat traffic out of the track with a “you change the tires then…” salute as they walk off into the sunset, Stone Cold stunning some Buds.

Each year about this time, the topic comes up regarding road courses, do we need them, and should one be in the chase. Let’s take these topics and the typical responses one by one:

“We don’t need no dang road courses in NASCAR! This is stock car racin’, not fancy pants Formula One or IndyCars!”

This is about the dumbest-assed argument/comment/topic/discussion we hear during the year, running neck and neck with “take off the restrictor plates so they go 240mph.” First of all, road courses are every bit a part of NASCAR’s history as super speedways and short tracks. 2015 Hall of Fame inductee Joe Weatherly got killed at one, Riverside, in 1963. Richard Petty’s 28th win came at Bridgehampton, NJ in 1963, and if you want to get technical about things, the original Daytona Beach Course? Road course…and a rally stage. Back in the 1960s and 1970s, the road course at Riverside would bring the best drivers in the world from all disciplines to get in a stock car, with the Motor Trend 500 always one of the most anticipated races of the season.

“There shouldn’t be a road course in The Chase….not everybody is good at road racing and we only race there twice a year!”

Yeah? We only race at Talladega twice, and that shows up in The Chase – and the driver there is the smallest part of the equation. Regarding the driver not performing well at road courses, there’s a simple solution for it: get better at it. I mean, you would think a CHAMPION would be adept at all tracks, not just the same 1.5-milers that require a similar set up, run the same speeds, and conspired to about kill the sport over the past few years, and if there’s a team that has a handle on them, well they’re probably going to win or Top 3 the competition in half of the Chase races. With the new elimination format, throwing in some variety the first few races would round out the track breakdown, and set the stage for an upset or two in the first round.

“It costs the teams too much money for just two races a year!”

Well plate cars don’t exactly run on good intentions either. Road courses are the new short tracks since there’s only Richmond, Martinsville, and Bristol left as short tracks (sorry folks; Phoenix is not a short track. Neither is New Hampshire.), and everybody loves beatin’ and bangin’ right? Right. So do the math on this one, and pick someplace pretty to run these damn things in the fall. Watkins Glen or Road America would work. Just bring some rain tires, wipers, and deer whistles.

At Dover it was all but a done deal that Greg Biffle was going to leave Roush Fenway Racing. A week later at Pocono, it was announced he would be remaining with Roush. After Sunday’s race at MIS, Biffle might want to see if the ink isn’t dry yet on that contract. An afternoon which he deemed, “The most embarrassing day of my life”, Greg Biffle finished 20th. At least he was on the lead lap; Carl Edwards finished 23rd, while Ricky Stenhouse, Jr. – who is somehow doing worse this year than his rookie year last season – was 27th.

How bad are things at RFR? Biffle was the defending race winner here, and winner of two of the previous three. When crew chief Matt Puccia asked what adjustments he thought would help, he offered only, “You aren’t going to fix it here, so do what you want.”  A look through the standings shows two Fords in the Top 10 – Keselowski and Logano, five in the Top 20 with Juan Pablo Montoya blowing in for the weekend in 18th, Trevor Bayne in 19th  in a Roush rental, then Biffle in 20th. Carl Edwards nearly got lapped 50 laps into the race, while Stenhouse finished 10 spots behind his girlfriend, whose car kept popping out of gear. For Roush to lay an egg like that at Michigan is borderline heresy. Edsel Ford goes to a few races a year, and this is one of them. For the Blue Oval’s flagship to be floundering like this, one has to wonder what is it that Penske Racing has that Roush Fenway doesn’t. Since Penske Racing is getting their engines from Roush, maybe slide a little something their way to help even out the fight between the 10 car Hendrick Motorsports “alliance”?

While it seems unlikely that both Biffle and Edwards will leave at the same time, recent performance isn’t doing much to twist their arms to stay. The only angle RFR has right now is that Jack Roush gave both Greg Biffle and Carl Edwards their dream shot as relative unknowns – and they’ve more than made the most of it, particularly Biffle winning Roush’s first two NASCAR championships.

Whatever the outcome with those two, they are worlds away from the days when Roush Racing was the scourge of any place remotely requiring downforce, even when their engines were way down on power to the competition, prior to the Yates motor merger. Heck even 2011 when Carl tied for the championship seems like it never happened. With Hendrick and Stewart-Haas running roughshod through the series right now, there needs to be a balancing force from another team and particularly another manufacturer and brand. Penske did it a couple of years ago as the sole Dodge outfit, but their two car Ford team is greatly out-numbered and unlikely to contend for the Cup without some reinforcements within their corporate ranks.

Great column, I agree with all of it. But…..How can you be so callus when it comes to the suffering of pouty zillionaires. Poor petulant Kevin. How hard his life must be. Maybe in addition to his horrid pit crew his upstairs maid didn’t do a good job making his bed. Maybe one of the downstairs maids was slowin cleaning up that spilled popcorn in media room six! What if the cook constantly over cooks his steaks. Suppose his private jet pilot actually addressed Mr. Harvick as Kevin. The little people can be such a bother Vito. Show some compassion for the suffering of misunderstood zillionaire. Oh, the humanity. I have to lie down now.

Maybe you have race drivers confused with the spoiled over paid criminals of the NBA, NFL, MLB.

You got me there Wayne. He is Saint Kevin compared to some of the miscreants in the National Felon League and the NBA!

These days the only good races are short tracks and road courses anyway.

Kevin always struck me as a totally unlikeable person, Delana too. You can have all the talent in the world, but what does it matter if you are a world class azz?

@ kb …I agree. Anyone who pulls into another team’s pit stall because he’s upset with the driver is a bonehead. We’ve all seen Havick do that more than once. Plus any driver who puts a burning car into a tight space and walks away because he’s mad should be penalized for putting other people in danger. Again another bonehead move for Harvick. The next time “Happy” throws a hissy fit someone should pop him. Hey, how about we call Ambros. At least ” Mrs Happy” seems to be keeping a low profile. Maybe motherhood has matured her.

Funny stuff you wrote. No “Mrs. Happy” does not keep a low profile, she is ever the promoter for Kevin’s sponsors. Think the dinner scene in Talladega Nights. She also has a very annoying habit of promoting Danica as her sons new best friend. Keelan is not kept out of the public eye, which I think isn’t the wisest of moves. I admire the other Nascar parents restraint in keeping their children out of the limelight. This will come back to bite them, methinks. Twitter is not anybodies friend.

I will contribute $500 to a fund to go to Harvicks pit crew should they ever just leave the flaming a****** up on jacks during a race and walk away!

If I was Kevin I would be ticked off too. His crew makes mistakes way too often which has cost him at least 2 wins. He has also had way too many freaky things happen from tires to wheel hubs. Once again, probably costing him wins. Why wouldn’t he be frustrated? I would.

This kind of writing encourages my interest in Nascar. Harvick is a bitch. NO Danica fluff thanks!