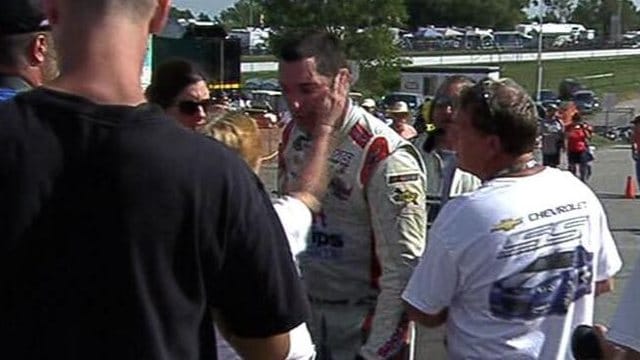 Max Papis, post-Truck slap has been nowhere to be found in 2014 as the road ringer disappearance in Sprint Cup continues. Credit: CIA

When I first started watching NASCAR, the road course races were among the best of the year.

Not only were the tracks — Sonoma and Watkins Glen — the only instances all year in the Sprint Cup Series where one could watch drivers actually take a right turn every lap. They were also chock full of interesting new talent, drivers who weren’t going to be found anywhere else on the schedule. Whether they were sports car racers, aces known for their prowess on each track or simply small-time drivers who decided to take a crack at tracks requiring a little less horsepower, the entry lists had some new faces. It was incredibly intriguing, an extra incentive to pay attention that week.

Somewhere along the line, the Sprint Cup Series became more of an exclusive club. The same 43-45 drivers showed up every week, year to year, with little variation, as a dwindling amount of part-timers swoop in to test their luck on occasion.

In fact, not since 2010 has a ringer cracked the top 10. Boris Said, an entrant at Sonoma this weekend, finished eighth for Bill Jenkins’ short-lived No. 26 team that year.

Top 5s are even bleaker. Ron Fellows finished fourth at Watkins Glen in 2007 for Hall of Fame Racing.

Take a dive into the last five years of Sprint Cup road course racing for supposed ringers — it’s a shallow pool. The only ringer that pops into the conversation in terms of average finish is Jan Magnussen, who drove a one-off race for Phoenix Racing and finished 12th. Every single other driver is a full-timer in the series, regardless of road course prowess. Marcos Ambrose is an interesting chart-topper, sure, but he’s a full-time competitor who doesn’t count as a ringer. The others are getting pushed to the bottom.

After Magnussen, there’s Max Papis, coming in at a 20th average finish by running half of the 10 road course races over the last five years. Mattias Ekstrom and Patrick Carpentier follow, with Owen Kelly ranked fifth — 31st overall among all drivers who have raced at least one road course event in that span.

What’s the deal? The available rides have to be addressed. The big teams don’t have the openings like they used to because their drivers are getting better at road racing. The small teams will spring for a driver every once in a while, but there’s even less of them these days. And if Boris Said or Ron Fellows does get a ride for the weekend, if it’s for a team that can barely manage a 30th-place finish most weeks, can they really be expected to pull out a race where they contend for a top 10, let alone a win?

Perhaps it’s a matter of the road course ringer pool, too. Said and Fellows, once considered at the top of their game, are both over 50 years old now, maybe at the twilight of their careers. This weekend, the only other entered ringers are Alex Kennedy and Tomy Drissi; the former hasn’t proven himself yet, and the latter is also over 50.

In fact, where did all the ringers go? Surely they’re still around somewhere, right?

Oh, wait, a lot of them are on the Nationwide Series list at Road America — Alex Tagliani, Kenny Habul, Justin Marks and the like. All three are in top-tier rides and seem to be within at least sniffing distance of the top 10, perhaps more.

Keep an eye on this space around Watkins Glen and expect some Nationwide coverage, apparently. It’s where they’re all flocking these days.

I love road racing. Just like last years CWTS dirt race Road courses are a nice change of pace. They also force drivers to expand their driving skills. I am glad to see the ringers go if for no other reason than to see how truly awful some supposedly professional NASCAR drivers can be when more than turning left at the next corner is called for.

I used to not care for road racing, now I want more. I’d like to see a third of the season on them.

One way to turn the snoozefest at Indianapolis into something worth watching would be to use the road course. Guess that makes too much sense to the clown act running NASCAR these days.

I”m with Pete, never like Road courses, now they make for the best racing…..need a light oil down, unnoticed by the control tower, with 2 laps to go, to add to the excitement.

I always hope for good weather where I live when the road races are on TV. I hate to be stuck in the house and have to watch the mess on the TV. I can’t figure who is actually in the lead and who is doing poorly because of the different pit strategies. The leader can actually be far behind due to pit strategies. I wish that there were none.