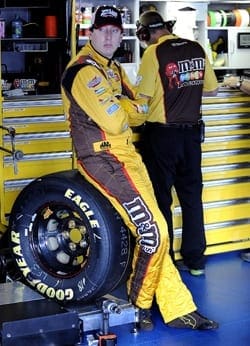 Nearly a week after Sprint Cup star Kyle Busch was parked for the weekend at Texas following an incident in the Camping World Truck Series last Friday night, the sport is still buzzing with reaction and speculation about the driver, the punishment, and the future.

The picture still wasn’t terribly clear on Thursday night, just hours before the Cup cars were scheduled to open the weekend practices, though a couple of the pieces have fallen into place. ESPN reported that Busch would drive this weekend, but Interstate Batteries will replace M&M’s, who was scheduled for the Phoenix weekend, as primary sponsor and will likely adorn the No. 18 at Homestead-Miami Speedway next week for the season finale, though M&M Mars has released a statement saying that they will honor their sponsorship contract with Joe Gibbs Racing in 2012. Z-Line designs reportedly has asked for Denny Hamlin to replace Busch in the No. 18 Nationwide entry at Homestead as well (Joey Logano was already scheduled to drive the car in the NNS race at Phoenix). And NASCAR handed down the additional penalty of a $50,000 fine and probation through December 31, 2011.

Kyle Busch has a history of petulant behavior and run-ins with competitors but has never faced serious repercussions until now.

Let’s be clear here: NASCAR’s role in punishing Busch is over. Any additional penalties will come from Joe Gibbs Racing and Busch’s sponsors. While the penalty from the sanctioning body seems light ($50,000 is less than the cost of a top race truck; it would have been nice to see Busch held responsible for the full replacement cost of the one he destroyed and the probation of just two races is a bit of a joke. The end of 2012 would have been much more reasonable), NASCAR is done here. Any additional penalties will come from JGR and Busch’s sponsors.

As of Thursday night, it appears that the only other penalties Busch will face are the suspension from the seat of the No. 18 Nationwide car at Homestead and the loss of M&M’s for the final two weeks of 2011 (which likely includes a refund to the sponsor for those two races).

You have to wonder if they did the right thing. Despite this week’s penalties being weak, NASCAR did all they really could. Without a clear ruling about how far is too far, without precedent for a longer parking, the sanctioning body handled the situation right. Though there are still questions to be answered-will NASCAR tolerate retaliation from other drivers on Busch for various incidents, now that they know he can’t do anything about it? I would hope not, and if that were to happen, that NASCAR would penalize them accordingly. Hitting a guy when his hands are tied is a cowardly thing to do. Hopefully NASCAR knows that and will take appropriate action

But what about JGR? As of Thursday night, there was no word from the team about any internal sanctions, and with Busch confirmed as the driver of the No. 18 this weekend, it appears that any further punishment will be either monetary or service-based. Word on the street at Texas was that Busch wasn’t given a choice about whether he wanted to sit on the pit box or not, and if that’s the case, it was the right thing for JGR to do. Having to watch your team perform without you is much more difficult when you really have to watch, instead of hiding behind whatever you can find at home to fill the time. If it is true that Busch was ordered to sit on the box for the race, it was a good move. Hopefully Busch will be asked to pay the difference in the crew’s point bonus as well to make up for the points positions he cost them. That’s only fair; the No. 18 crew had nothing to do with Busch’s actions Friday night.

As for Mars, they are in a difficult position. It’s easy to say the company should have dropped Busch. The sponsor and its merchandise are very popular with the very youngest race fans, and Busch’s attitude isn’t something that many parents want their children to aspire to. They already don’t feature Busch prominently on their website as virtually every other major sponsor does; even the backers of the smallest teams feature their drivers proudly. That M&M’s Racing does not is already telling. Truthfully, a much better fit for Busch would be an adult-oriented sponsor.

Still, Mars knows that Busch gets them the one thing they really pay for-airtime. And when it’s because of his racing, on a good day when he’s brilliant and clean, that’s great for a sponsor. Busch can win races and make the Chase in any given year, and perhaps will win Mars a championship when all is said and done, if he can learn from his past. If the company had dropped Busch and stayed with JGR, the driver pickings for 2012 would have been slim so late: Brian Vickers raised so much fan ire at Martinsville that he would be a tough sell. David Reutimann is an okay driver, not a brilliant one. Other Toyota drivers are already tied up with 2012 contracts, and Brian Scott isn’t ready for a full-time Cup gig. The top free agents have signed already. So, while Busch clearly doesn’t fit the company mold (hence Dave Rogers and the pit crew being featured on the sponsor’s website while Busch is barely even mentioned in passing), there wasn’t a better option for 2012.

For Busch, this whole experience had better be a lesson. The thing about it is, if he doesn’t learn and truly change his ways (and not just as a PR stunt like he has the last couple of times), he will ruin his own career. If he had been let go from JGR (as he still could be if he ever does something like Friday night again), he’d have little chance at a top ride at the Cup level unless he could get his own team to that level; he’s burned bridges with Roush Fenway and Hendrick, and most likely by default, Wood Brothers, Richard Petty Motorsports, and Stewart-Haas Racing as well. Richard Childress likely wouldn’t take him, and it’s debatable that Roger Penske would want another high-maintenance driver, either. And that doesn’t leave much.

Kyle Busch is a brilliant racecar driver, probably among the top five in the garage right now on raw talent. His problem lies in his utter lack of respect for anyone else. As aggressive as he was, Dale Earnhardt had the respect of the other drivers, and he respected them. Even Terry Labonte. That mutual respect is what makes most drivers adhere to the unwritten rules of motorsports: Race others like they race you. If you must get even, do it under green, spin them clean, and don’t do it when it involves others. Hooking someone in the right rear is dirty, and you never do that. Busch doesn’t seem to think those rules apply to him. He has an air of entitlement about him-he should _never_ be the one to back out, even if reality says otherwise.

Part of the problem is that nobody has ever said “no” to Kyle Busch. His parents reportedly falsified documents so that he could race a year early, rather than playing by the rules and waiting. NASCAR certainly never told him no, not in any of the other incidents this year. If they had drawn the line sooner, maybe, just maybe, it wouldn’t have come to this. But nobody said “no,” and that hasn’t changed; JGR will let Busch finish out the year, M&M’s will be back at Daytona like nothing ever happened, even his NASCAR probation will be lifted after just two races. Hopefully, behind closed doors, someone has sat Busch down and told him “no more,” because if they haven’t, well, what, exactly is his reason to get off the path he’s been on since he was 15 years old?

Honestly, there’s really no solution to this situation in which everybody gets back what they had and goes on as if nothing happened. It’s a blight on Busch’s career, no matter what he does in the future. It’s possible, and hopeful, that this is what Busch needs to get himself and his career turned around. If Busch learns that his actions have consequences and that he needs to have respect for and earn the respect of his competitors, that could be the difference between a multi-championship career and never winning a title. It could mean the difference between having a top ride or not, for that matter.

The bottom line here is that NASCAR, in parking Busch and holding him accountable for his actions, did the right thing. While many people compare Busch to a driver like Dale Earnhardt, the comparison is weak. Earnhardt, as aggressive as he was, had the respect of his competitors, and he respected them. It’s the same for Tony Stewart, who changed his ways a good bit after Home Depot fined him and laid down the law as his sponsor. What Busch lacks isn’t talent, it’s respect. With respect comes judgment and maturity.

Hopefully Busch will learn that lesson through this situation. It’s flawed to say that NASCAR should have penalized other drivers and didn’t and then turn that around to say they shouldn’t have parked Busch because they didn’t park the others. Two wrongs don’t make a right, and hopefully NASCAR will realize that fans also have a line they don’t like to see crossed. They finally said “no.” But the sanctioning body acted correctly for the circumstances with the parking for one weekend. The other penalties could have been improved, but NASCAR finally drew the line in the sand on their “boys, have at it” policy, and that is a good thing.

What Kyle Busch failed to realize when he used Ron Hornaday racing him as an excuse to take out his long-standing vendetta against Kevin Harvick (because let’s face it, it _was_ and excuse. Hornaday, not Busch had position at the time the incident started last week, and Busch was the one who decided to take it three wide at lap 15 and pinch Hornaday against a lapped truck that he knew would make Hornaday’s machine loose. He could have waited until Hornaday cleared the lapped truck to make an aggressive move to the outside.) was that his actions could have far-reaching consequences.

If he doesn’t change drastically, it could still cost his career-or worse, someone’s life. In the course of a week, Busch has mathematically eliminated his Cup team from championship contention; disgraced his sponsors, to the point where at least one appears ready to walk, leaving his team underfunded for 2012; taken bonus money out of the pockets of his pit crew with a lower points position; and put his car owner in a position no owner ever wants to be in. If Busch learns nothing, it’s a crying shame. If he learns respect for others, it could still be worth it someday, when all is said and done. Time will tell.

Seriously, Aric Almirola must be the forgiving type. After JGR treated him less than well as a development driver a few years back (Almirola subbed for Denny Hamlin, who was late arriving from his Cup obligations, at Milwaukee and was pulled from the car when Hamlin arrived despite the fact that he was running for the win at the time. Hamlin won the race, and although Almirola was credited with the win, he was visibly upset at his treatment afterwards). Nobody would have blamed him if he’d told JGR to take a hike when they inquired about him as a possible fill-in for Busch.