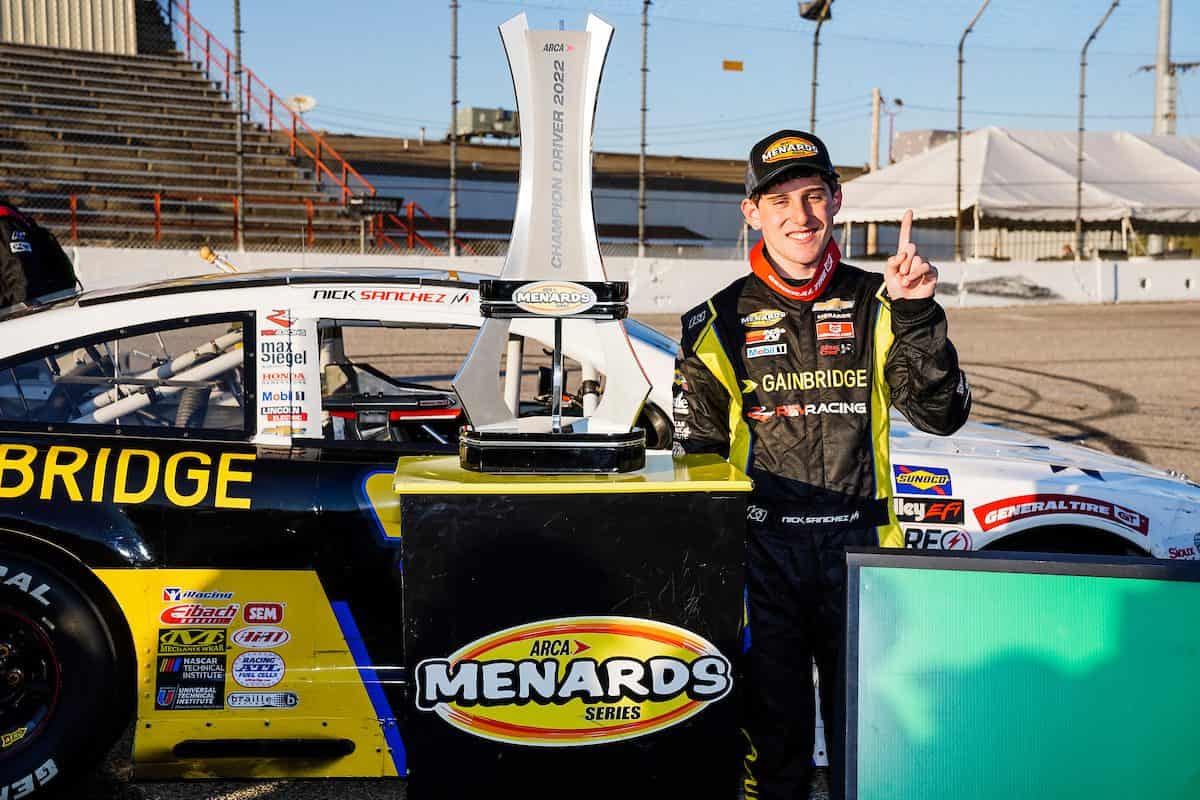 Daniel Dye entered the season finale at Toledo Speedway only trailing by two points, but a broken right-front ball joint ended his bid at winning the title.

Rajah Caruth led the points for several races, but his three DNFs in the final five races relegated him to third in the standings.

Remarkably, even though he missed four races early in the season due to not being 18 at the time, Sammy Smith drove his way up to a fourth-place finish in the standings.

Greg Van Alst only tallied one top five in his first full-time ARCA campaign, but the 41-year-old still wound up fifth in the championship standings, and he’s seeking to improve upon that in the 2023 ARCA season.

The top five drivers were forces to be reckoned with in 2022, but what stood out and who took home the third annual Frontstretch ARCA awards?

In 2022, the ARCA Menards Series saw an increase in its level of competition, a boost that was undoubtedly the top storyline of the season.

To compare, in 2021, champion Ty Gibbs and runner-up Corey Heim were the only drivers to win multiple races. In 2022, five drivers captured at least two victories in 2022.

The field depth strengthened so much that NASCAR Xfinity Series regular Brandon Jones won three out of his five starts. Meanwhile, dirt regular Ryan Unzicker earned his second career ARCA victory, dispatching the series regulars without trouble as Unzicker led 63 of the 78 laps after starting 20th.

Ryan Unzicker’s win was one of my favorite moments on the year.

He’s been a long-time dirt competitor in ARCA and took home a checkered flag in Bill Hendren’s final race as an owner.

A storybook ending if there ever was one. https://t.co/RI2riQw6cc

Four drivers led more than 100 laps in 2021; seven accomplished that feat in 2022. Of those seven, only Dye was shut out of victory lane, and he very well could have scored one, if not more, wins in 2022.

Gibbs, Heim, Brad Smith and Sanchez were the only four drivers to run 90% of the 2021 schedule. Nine drivers ran 90% of the 2022 season, and that number doesn’t include Sammy Smith’s 16 starts.

Can ARCA retain that upward trajectory in 2023? Difficult to say right now, because many of the drivers responsible for the heightened competition are moving on. Sanchez, Dye and Caruth all will run as rookies in the NASCAR Craftsman Truck Series in 2023. After running part time in the NASCAR Xfinity Series in 2022, Smith will pilot the No. 18 Joe Gibbs Racing Toyota full time. Taylor Gray, who won six times across the three ARCA series in 2022, will compete full time in Trucks once he turns 18 on March 25.

What will 2023 bring? While the top teams have yet to make announcements, whoever wins the title next year will likely find themself in consideration for a promotion.

The 2022 season-finale race weekend at Toledo — its first at the track since 2011 — was a grand slam event.

As a short track, the minimum age requirement is 15 instead of 18, the necessary age for larger tracks. The move immediately paid dividends with the highest car count at the half-mile short track since 2017, and it produced a championship race for the ages.

To kick off the weekend, the Toledo Speedway Bar and Grill next to the racetrack hosted past series champion owners, drivers and crew chiefs, current ARCA personnel and fans. The night featured lively stories of years past, fond recollections of the importance of the series in individuals’ lives and an enjoyable atmosphere exciting everyone for the championship race the following day.

How many championships can you fit in one picture? A lot!

Thanks to everyone who came to the Past Champions Celebration tonight at the @ToledoSpeedway Bar & Grill.

Now all that's left is to crown a new champion. We do that tomorrow. pic.twitter.com/uMT21VEWRX

On race day, championship drama quickly unfolded. Holding a precarious two-point lead, Sanchez’s No. 2 had an engine problem, forcing his Rev Racing team to swap the engine out before qualifying. Sanchez never wavered in his confidence, though.

When asked if he’s nervous about the engine change, @Nicksanchez080 said, with a wry smile on his face, “No.” His confidence in his @RevRacin team is admirable.

The No. 2 engine works. @RevRacin has successfully switched its engine. The team hopes @Nicksanchez080 will be able to qualify. pic.twitter.com/I4Ey9To9JB

Thanks to Sanchez practicing in his teammate Caruth’s No. 6, he retained his qualifying position of eighth.

Dye led the opening lap, scoring a valuable bonus point before Jesse Love showcased his fast No. 20 Toyota; Love was battling Smith for the owners’ championship, too.

When the first competition caution flew, Rev left Sanchez on track rather than bring him to pit road, matching Dye’s bonus point. On the restart, Dye’s No. 43 engine momentarily shut off, costing him many positions. Yet Dye battled back to one spot behind Sanchez at the second competition caution.

More chaos ensued. Both drivers’ cars struggled to re-fire after exiting pit road, and then calamity struck Dye’s No. 43. The mechanical woe sent Dye to the pits for numerous laps for repair. Although his GMS Racing team repaired the racecar, Dye returned on track to finish 37 laps down in 18th, a career-worst finish.

In response, Smith does a burnout right in front of Love's car.

For the cherry on top, it will host the 2023 ARCA season finale as well.

Sammy Smith won the 2021 ARCA Menards Series East championship, yet in his main ARCA performances, he scored two top fives and two top 10s with zero laps led in three starts. He made up for it by practicing many burnouts across the three ARCA series, totaling 12 total wins.

Smith ended the season with three straight victories and 10 top fives and top 10s in a row. Smith led over 100 laps four times — all victories for him, too.

Smith impressively failed to complete one lap in his 2022 ARCA campaign. As a result, Smith completed the sixth-most circuits in the 2022 season, even outpacing two full-time drivers. He already is 37th in career ARCA wins, 19th in career poles and 17th in career laps led.

What a amazing day! Fought hard all day and came up with the win and the owners championship! Thanks to all my partners! pic.twitter.com/mEzpSVc3N2

Of the four panelists’ predictions for the 2022 ARCA champion, only yours truly picked Sanchez to win the championship.

Sanchez bested all his 2021 statistics and he led the series with laps completed. Sanchez completed all but 12 laps of the season (2,543 out of 2,555 for an impressive 99.5%). Sanchez’s lone finish outside the top dozen was a 20th, one lap down, in the season opener at Daytona International Speedway.

As the other full-time competitors struggled, Sanchez kept his No. 2 clean, resulting in zero DNFs. Dye meanwhile encountered mechanical woes at Toledo as well as DNFs in back-to-back races at Iowa Speedway and heartbreak at Berlin Raceway.

ARCA doesn’t use a playoff format; consistency matters. And consistency and winning are what led Sanchez to become the champion. Sanchez won three times: at Talladega Superspeedway, the first Kansas Speedway event and Michigan.

A downside: Sanchez logged only one top five at a short track, allowing Dye to thrust himself back into championship contention. But at Toledo, Sanchez did exactly what he needed to, even before Dye’s championship hopes ended, coming out on top.

Disappointment of the Year

Venturini has fielded many talented drivers, many of whom have become NASCAR stars. Conversely, driving the No. 25 for the Toyota powerhouse, Toni Breidinger failed to succeed in 2022.

Entering 2022, Breidinger had 12 ARCA starts with three top 10s, highlighted by a pair of ninth-place finishes. Her 2022 outcome produced six top 10s, but she routinely struggled to keep pace with the leaders, amounting to a paltry four lead-lap finishes.

Breidinger’s inability to perform well is also indicative of her No. 25 team’s owners’ points finish. The team wound up eighth, behind the other full-time Venturini entries. The organization’s part-time No. 55 ran in only nine events, but its drivers still scored more top 10s than Breidinger.

In top-notch equipment, Breidinger trailed the field before the green flag even flew. She started inside the top 10 eight times, and three of those were via owners’ points, not qualifying speed.

Of the full-time drivers, Breidinger only bested fellow rookie Amber Balcaen and underfunded owner/driver Brad Smith in all statistical categories.

Breidinger’s plans for the 2023 season have not yet been announced.