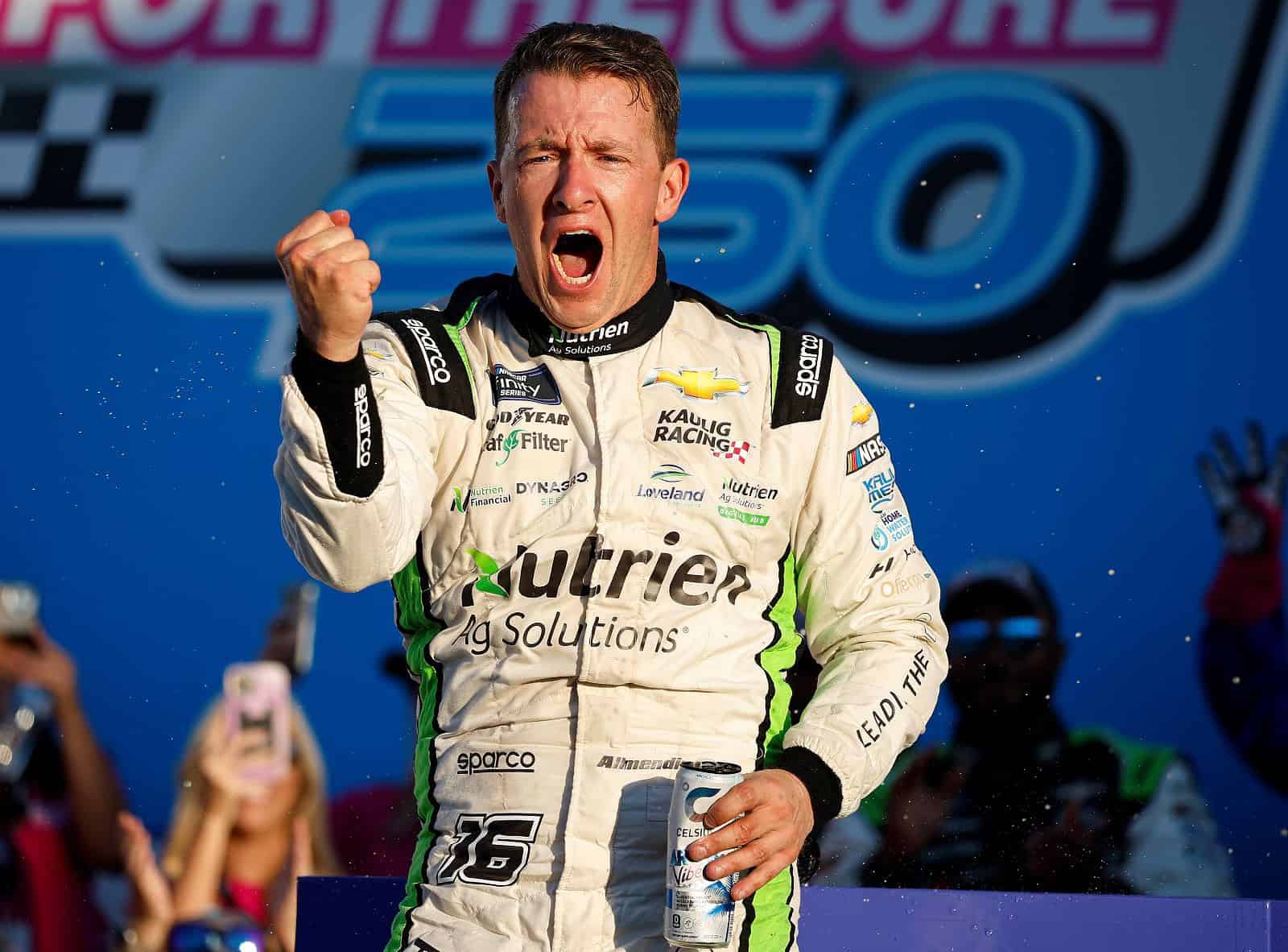 The 2022 NASCAR Xfinity Series season had its share of exciting moments, as well as the uncanny.

Here are a few of 2022’s superlatives as we celebrate the season that was.

This award is a nod to Gant’s four-race win streak in the NASCAR Cup Series in 1991, nearly sweeping the month of September.

Darlington featured a thrilling finish in which Sheldon Creed, Kyle Larson and Gragson all battled for the lead. All three drivers hit and scrubbed the wall at the end, but Gragson was able to push through and get past Creed coming off the final turn.

At Kansas, just 93 of the 200 scheduled laps were run when the race was red-flagged due to rain. Since Gragson was the leader when the caution came out, he took home the victory.

Then at Bristol, Gragson’s crew chief Luke Lambert called a great strategy, keeping Gragson out before a restart while the rest of the leaders pitted with about 20 laps to go. He held off some charges from Brandon Jones and grabbed his third consecutive win.

Lastly, at Texas, Gragson was able to survive the chaos and take his seventh victory of the season after leading 85 laps.

A combination of luck, strength and good strategy were all Gragson needed during this successful September stretch.

I’m sure you remember Denny Hamlin‘s tussle with Joey Logano a few years ago, as well as his infamous impersonation in the interview afterward.

Martinsville Speedway (and short tracks in general) tends to bring out the passion and desire to win, as well as the frustration when drivers don’t achieve a victory.

One who’s had his share of both is Xfinity champion Gibbs.

In the spring Martinsville race, Gibbs was passed by Joe Gibbs Racing teammate Jones for the lead in overtime. He also got in a fight with Sam Mayer afterward.

Gibbs and Jones’ roles were reversed in the next-to-last race of the season at Martinsville, but more was at stake this time around. Jones was fighting for a spot in the Championship 4 at the end of the race.

With Gibbs locked in already, he should race Jones clean, right?

Gibbs bumped Jones hard enough to dent his front end, spinning Jones around and back into the wall. The crash ended Jones’ championship hopes, while Gibbs went on to win the race.

Even before these events, Gibbs used the bumper on another teammate, John Hunter Nemechek, early on in the season at Richmond Raceway. This wasn’t as bad as Jones’ crash, but Nemechek was still unhappy about the contact.

Whether Gibbs wants to or not, he seems to have stepped into that same villainous role as his Cup predecessor Kyle Busch, especially after he waved on the boos at Martinsville.

Perhaps 2023 will be different?

Some drivers don’t show as much emotion after their wins, possibly because of tiredness or shock, or a combination of emotions wrapped up at once.

AJ Allmendinger is not one of them.

No driver shows more honest emotion when he wins and looks more like he stepped barefoot on a Lego when he wins than AJ Allmendinger. #NASCAR pic.twitter.com/r6Mmd0HLg9

Allmendinger won five times in Xfinity this year, and each time he showed so much passion and emotion in his celebrations and post-race interviews.

One of his victories was at Talladega Superspeedway in the fall. Allmendinger led just three laps, but they were the most important ones in the race. There was a long green-flag run of 58 laps that closed out the race, allowing for varying pit strategies.

In the end, Mayer was out front, but Allmendinger, with some help from Kaulig Racing teammate Landon Cassill, was able to sneak around Mayer just before the finish line.

With Allmendinger going back to Cup full time, I’ll be looking forward to his facial expressions after his wins.

AJ Allmendinger could have just won a race, stepped barefoot on a scorpion or performed a Slipknot song at karaoke night and that's why you have to love the hell out of AJ Allmendinger pic.twitter.com/sRuekktsm0

The Not-So-Gouda Way to Gain a Sponsor Award

It was Fourth of July weekend, and the field rounded the corner at Road America. Suddenly, a car got turned around near the front and those behind couldn’t avoid him. Mayhem ensued, with cars careening into each other in a section that’s hard to view by spotters.

Then Josh Bilicki came around the turn and into the grass, right into a Sargento cheese sign.

Bilicki went on to finish 13th, having avoided major damage from the pileup.

He later shared with Forbes that a hit from behind sent him into the grass.

After the race, Bilicki realized the opportunity presented before him and pounced on it. An email and some calls later, Bilicki had a sponsor for Watkins Glen International.

🧀 Excited to announce that @SargentoCheese will partner with @joshbilicki as primary at @WGI!

It was a match made in cheese heaven for both the Wisconsin native and brand.

Bilicki ended up 17th at Watkins Glen, even earning some stage points in stage one.

DGM Racing in general has had some cool and wild Halloween schemes at the end of October the last few years, and this year was no exception.

Williams himself even wore a black-and-white firesuit from Beetlejuice, donning the name Beetle Josh.

Labbe finished 13th, Williams was 23rd and Massey came in 25th at Martinsville, but their liveries were on the top of the field that Halloween weekend.