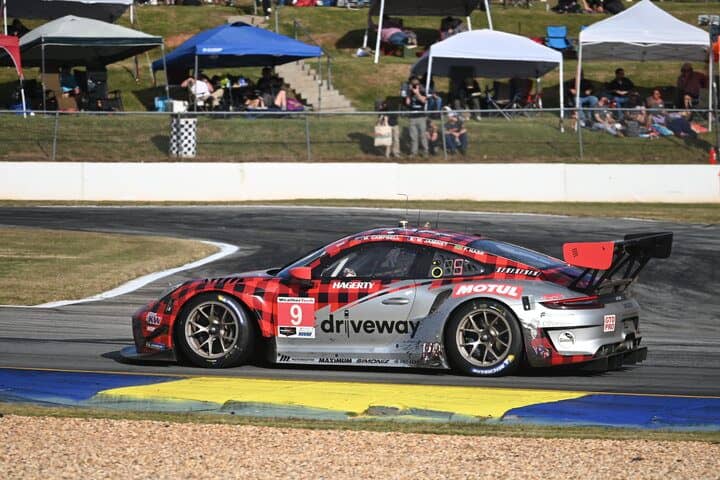 Pfaff Motorsports announced their full driver lineup for the 2023 IMSA WeatherTech SportsCar Championship season Monday morning (Dec. 5). Klaus Bachler and Patrick Pilet will drive the No. 9 Motul and Driveway-sponsored Porsche 911 GT3 R full-time in the GTD Pro class. For the endurance races, they will be joined by Laurens Vanthoor.

“Competing the whole season in IMSA for the first time makes me very proud and happy – I always wanted to tick that box,” Bachler said in a press release. “I am really looking forward to experiencing and getting to know these iconic racetracks with a strong field of drivers and epic battles. Contesting my first season in IMSA with Pfaff Motorsports really honors me. Being part of the Pfaff Motorsports family means being part of an extremely professional and successful team. I can’t wait to do my first race in the Plaid Porsche surrounded by this great excitement of North American motorsport fans.”

“I’m really excited. I drove in the U.S. for many, many years and I had the chance to win the championship in GTLM and finish second and third in other places,” Pilet stated. “I really feel like home there, it’s a great championship. I love every track and the way you race there. I’m really looking forward to that especially with Pfaff.”

Bachler comes to Pfaff Motorsports after racing full-time in Fanatec GT World Challenge Europe Powered by AWS Endurance Cup for Dinamic Motorsport. Thanks to a victory at Barcelona, he finished fourth in points. He has never run full-time in IMSA, but has seven previous starts in the Rolex 24 at Daytona dating back to 2013. His best finishes are a pair of fourths in 2020 and 2021 for Wright Motorsports in the GTD class.

Pilet has 83 previous IMSA starts between WeatherTech, Grand-Am and the American Le Mans Series. He has 13 career class victories, all but one of which came in the GT Le Mans class. He was the solo GT Le Mans class champion in 2015 for the CORE autosport-run Porsche GT Team.

Pilet has one previous start with Pfaff Motorsports. That came in the 2020 Rolex 24 at Daytona. While the team qualified on the pole, they ended up 13th in class.

For Vanthoor, the move is a return of sorts. After Porsche’s factory program in IMSA ended, Vanthoor drove full-time for the team in 2021 alongside Zacharie Robichon. The duo won four races (Sebring, Road America, Laguna Seca and VIR) en route to the GTD class championship.

“I’m extremely looking forward to working together with everyone at Pfaff again,” Vanthoor said. “First of all, we had a successful relationship with two victories and the championship in 2021, but mainly as well, we have very good private relationship where I had and still have a good understanding with everybody on the team. I’m very much looking forward to being back with them and working together and also spend time together.

Bachler and Pilet will replace Matt Campbell and Mathieu Jaminet with the team. The Porsche factory racers both have driving roles with Porsche Penske Motorsport for the 2023 season with the new Porsche 963. However, those roles have not been officially defined as of yet. The most likely time that their roles will be publicly announced is Porsche’s Night of Champions in Stuttgart, scheduled for later this month.