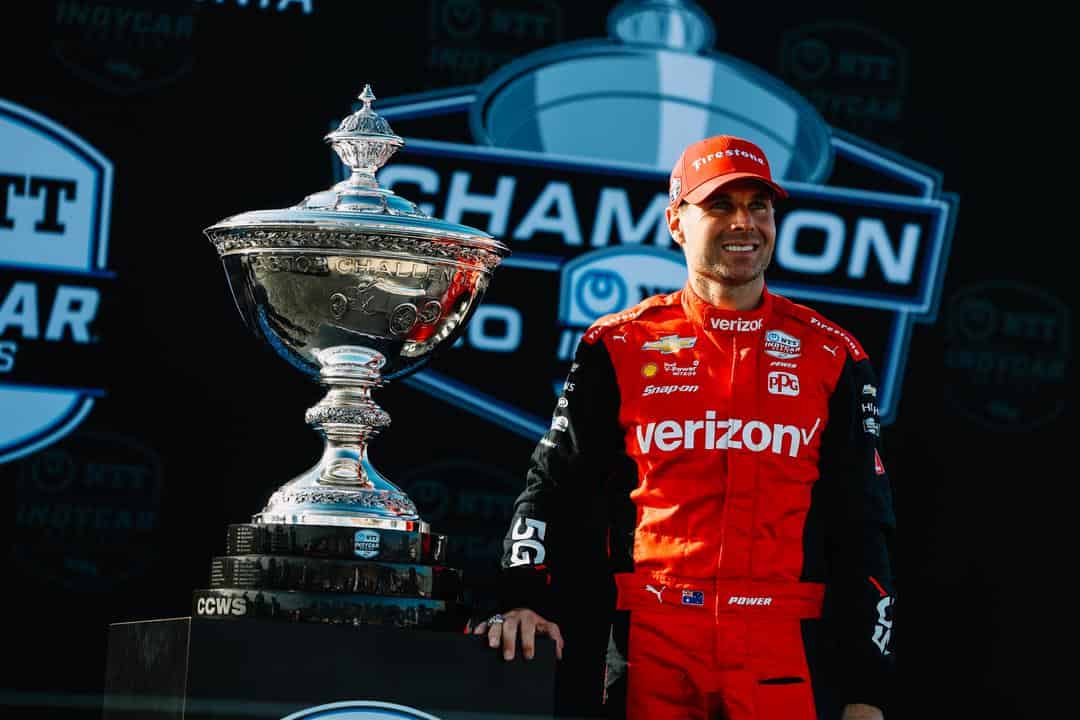 It’s been more than 12 weeks since the NTT IndyCar Series contested its last race of the 2022 season and crowned Will Power as champion. With so many other forms of racing being contested and finishing their seasons since then, did the IndyCar season even happen?

Yes. And it was glorious.

While the IndyCar season is probably the shortest major racing season on the planet, it packs a lot of punch into 17 races run in just over six months. Once again, the series put on a great show in 2022, and it’s time to pass out a few IndyCar awards.

As an IndyCar blogger since 2010, I’ve put on quite a few IndyCar awards ceremonies, but sadly, none of the drivers have ever shown up. That’s the case once again, but that doesn’t stop me from putting on my tuxedo, heading to my shed-that’s-become-a-sports-bar in my backyard, and honoring the worthy recipients with some of the most prestigious awards in the business.

Let’s take a moment to recognize some of the biggest stars in the IndyCar galaxy.

Driver of the Year: Will Power

This was an agonizing decision, and it’s very similar to the American League Most Valuable Player race between New York Yankees outfielder Aaron Judge and Anaheim Angels pitcher and designated hitter Shohei Ohtani.

Ohtani is the best baseball player on the planet, and second place isn’t even close.

At the same time, Judge had a season for the ages and chased down a 61-year-old ghost that was Roger Maris’ American League home run record.

The same debate exists in IndyCar. At this exact moment, Josef Newgarden is the best driver in the series, and, dare I say, one of the best drivers in the world. In 2022, the Team Penske driver was the class of the field, winning five times while posting six podiums, eight top-five finishes and 12 top-10 results. The history of the 2022 season will have his fingerprints all over it.

But he didn’t win the title thanks to, among other races, a 24th-place finish at the Indy GP and a 25th at the second race at Iowa, where he dominated all day before having a suspension failure and crashing out of the race.

In the meantime, Power had what could be argued as the best overall season of his career. We all know how great Power is: he’s the greatest qualifier in IndyCar history, he’s just one of five drivers all time to win 40 races, he won the 2018 Indianapolis 500 and the 2014 IndyCar championship.

With all of that, Power had never been as consistent as he was in 2022. Focusing on the big picture, Power minimized his mistakes and, despite only winning once, posted nine podiums and 12 top-five finishes.

It’s crazy to think a driver in their age 41 season could completely reinvent themselves, but Power did it, and if he keeps that mindset he can be a contender in 2023 as well.

Will Power reflects on his second Indycar Championship victory! pic.twitter.com/NH9VKd31tB

Rookie of the Year: Christian Lundgaard

When Christian Lundgaard signed with Rahal Letterman Lanigan racing, little was known about the then-20-year-old except that he came from Europe and his name was fun to say.

He came to IndyCar with some good credentials, but was entering a Rookie of the Year field that included drivers like Callum Ilott, David Malukas, Devlin DeFrancesco and Kyle Kirkwood. While Lundgaard finished just 14th in points, his season included seven top 10s, including two at Iowa Speedway, a runner-up finish at the Indy road course in July and a fifth-place run at the season finale at Laguna Seca.

Along the way, he did what a rookie should: he raced hard but clean, didn’t destroy a lot of equipment, and performed well when presented with an opportunity. That earned him a step up at RLL, as in 2023 he is moving to the No. 45 car previously occupied by Jack Harvey and will have full sponsor backing from Hy-Vee.

Don’t scratch your head. Of course, Wickens hasn’t driven in the NTT IndyCar Series since his horrible crash at Pocono Raceway in 2018, but he gets this award because he’s an IndyCar driver and what he did in 2022 was miraculous.

Driving 10 races in the Michelin Pilot Challenge TCR division with Bryan Herta Autosport with Curb-Agajanian, Wickens finished third in class in his comeback race at Daytona in January. He later followed with class wins at Watkins Glen and Mosport and finished sixth overall in points.

Even though his spinal cord injuries will more than likely keep him from ever driving an IndyCar again, Wickens will forever be part of the IndyCar family and more than deserves any accolades that come his way.

Like many drivers, Scott McLaughlin came to IndyCar with some impressive credentials – in this case, as one of the greatest Australian Supercar drivers of all time.

But Supercars aren’t IndyCars, right? McLaughlin doesn’t care, and with all of the young guns of the series garnering so much attention, the 29-year-old Kiwi might be better than all of them.

McLaughlin started the season by winning at St. Petersburg, then almost won at Texas Motor Speedway before Newgarden nipped him at the line. He later won at Mid-Ohio Sports Car Course and Portland International Raceway before finishing fourth in the standings. Had he not crashed out of the Indy 500 and finished 29th, losing out on a huge double-points opportunity, he would’ve been in the title discussion at the end of the season.

The scary part for the rest of the field? McLaughlin is going to get even better.

This is the brutally honest portion of the awards ceremony. Despite a massive amount of talent, the 22-year-old Californian didn’t get it done this year.

After winning six times in his first three seasons and finishing third and fifth, respectively, in the season points in 2021 and 2022, Herta took a big step back in the latter.

Sure, he did win the Indy GP and had some highlight-reel moves behind the wheel, but he also finished 23rd or worse four times, including 30th at the Indy 500 when he had mechanical issues and retired from the race just past the 320-mile mark.

Of course, the lack of form from Andretti Autosport had a lot to do with Herta’s fortunes, but for a guy who was testing with Formula 1 team McLaren and surrounded by rumors he might be heading to F1, a 10th-place finish in points doesn’t cut it. The scoreboard doesn’t lie, and, armed with the biggest contract in IndyCar, Herta needs a big turnaround in 2023.

Race of the Year: Indianapolis 500

Quick background: your host first went to the Indianapolis Motor Speedway in 1979 and 2023 will be his 24th time attending the race. Meaning that the Indy 500 will always win this award.

Of course, it should! It’s the biggest, fastest and oldest race in the world. It’s traditions have no equal and over the last decade the 500 has been home to some of the best racing IMS has ever seen.

This year was no different. Scott Dixon won his second pole when he turned the fastest pole run in Indy 500 history with a speed of 234.046 mph, then led 95 laps in the race before a crucial pit speed violation will just over 50 miles to go erased his hopes for a second drink of milk.

With just 10 laps to go, Chip Ganassi Racing veteran Marcus Ericsson, who had previously led just three laps on the day, took the lead for good and went on to his first 500 win after never finishing better than 11th in his previous three times at the Brickyard.

In all, nine drivers led laps, there were 38 total lead changes and 27 drivers finished the race. It was a Memorial Day weekend for the ages.

Drama of the Year: Alex Palou vs. Chip Ganassi Racing

Silly Season is always ripe for drama, and what the above parties put on over the summer should be considered Oscar-worthy.

On July 12, CGR announced that it had picked up the option year of Alex Palou’s three-year deal for 2023. Hours later, Palou countered with his own announcement, telling the world that CGR’s announcement was unauthorized by him and that he wasn’t returning to the team next year.

Hours after that, Arrow McLaren SP announced that Palou had come to a contractual agreement with them for 2023, which included the opportunity to drive for McLaren in F1.

What followed was finger pointing, lawsuits and bad blood. Oh, and did we mention that the two team principals – Chip Ganassi and Zak Brown – really, really don’t like each other?

Palou lost remote access to vital CGR data, and for all intent and purposes, his time at the team was over. Somehow, the Spaniard and his team recovered to pick up a podium at Nashville and a win in the finale at Laguna Seca to finish fifth in the final points.

When the dust settled, it seemed like everyone eventually got what they wanted. Palou will drive with CGR in 2023 and act as a McLaren F1 reserve driver before moving to AMSP at the end of his contract. CGR gets a championship contender for one more year, and McLaren gets one of the best young talents on the planet to compete for its team on one side of the pond or the other.

In so many ways, the  IndyCar Series took a huge step forward in 2022. Will it do the same in 2023? It remains to be seen, but the storylines for next year that were set over the course of 2022 will sure make it interesting.