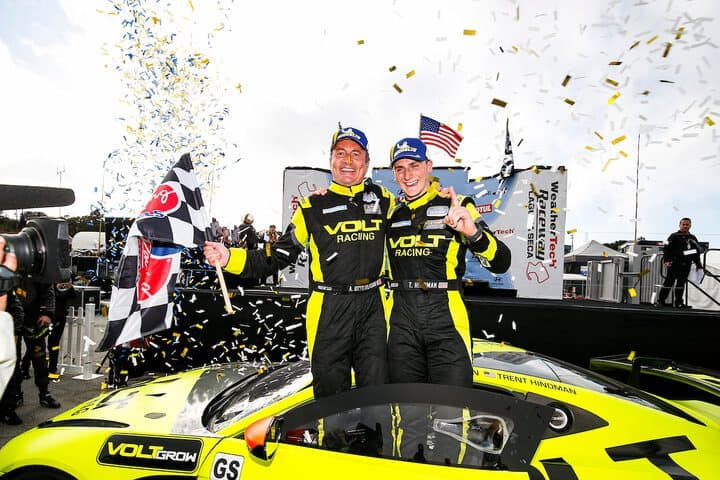 Wright Motorsports announced Friday (Dec. 2) that they will expand to two full-time GTD Porsches in the 2023 IMSA WeatherTech SportsCar Championship. In addition to the existing 1st Phorm-sponsored No. 16, a new car will run full-time for 2022 IMSA Michelin Pilot Challenge champions Alan Brynjolfsson and Trent Hindman.

Brynjolfsson and Hindman will drive the No. 77 Porsche 911 GT3 R with VOLT Lighting sponsorship. Effectively, the move results in the championship-winning Pilot Challenge team moving up intact to WeatherTech competition.

“I’m totally stoked to fulfill a longtime goal of racing in WeatherTech, America’s top series for professional sports car racing.,” Brynjolfsson stated. “Racing against the best drivers in the world is going to be a mega challenge but one that I have been preparing a long time for and a step I don’t take lightly. I have a lot to learn and look forward to my debut at the 24 Hours of Daytona. Hopefully I’ll have a lot of fans supporting ‘The Old-Man-Rookie!'”

As Brynjolfsson noted, Daytona will be his IMSA WeatherTech SportsCar Championship debut at the age of 55. The debut will come after six years of racing in GT4 equipment between IMSA Michelin Pilot Challenge (and prior to that, the Continental Tire SportsCar Challenge) and SRO America competition.

Hindman is a past champion in the GTD class, winning the title in 2019 with Meyer Shank Racing with Curb-Agajanian in an Acura NSX GT3 with Mario Farnbacher. He is a two-time champion of the Grand Sport class in Michelin Pilot Challenge, the titles coming in what amounts to two different eras for the class.

Hindman’s first GS title came back in 2014 with Fall-Line Motorsports in a BMW M3. At the time, the Grand Sport class was mainly comprised of cars built up from bodies in white as opposed to GT4 cars purchased from the factory.

“Alan [Brynjolfsson] and I have been working together for five years,” Hindman said in the press release. Throughout that time, we’ve won races, lost others, but more importantly we’ve become as strong of a team as you can find in the Michelin Pilot Challenge, and now I’m proud to say, WeatherTech Sportscar Championship paddock.

“The timing for the step up to GTD could not be better; we’re fresh off a GS championship victory and Alan’s game has never been stronger,” Hindman continued. “We’ve got a Wright Motorsports prepared VOLT Porsche 911 GT3 R, which will always be a force to be reckoned with, and the same phenomenal team around us that brought us to the 2022 Michelin Pilot Challenge title.”

Brynjolfsson originally arrived in what is now Michelin Pilot Challenge in a McLaren 570S GT4 in 2017, teamed up with Chris Hall. Mid-season, the team switched to a Ford Mustang GT4. At the time, Brynjolfsson explained the change to Frontstretch as a desire to race something more raw.

After a ninth-place finish in GS points in 2017, Hindman was brought in to replace Hall. The duo scored their first win together at Road America in 2018, then continued to improve with victories in both Michelin Pilot Challenge and SRO America’s Pirelli GT4 America SprintX in 2019, which resulted in Brynjolfsson winning the Porsche Cup for the top Porsche customer racer of the year.

Wright Motorsports took over operation of VOLT Racing’s Michelin Pilot Challenge operation at the beginning of the 2022 season. In their championship season, Brynjolfsson and Hindman claimed one victory at WeatherTech Raceway Laguna Seca (pictured above), five podium finishes and no finishes worse than seventh in the first eight races. A sixth-place finish in the season finale at Michelin Raceway Road Atlanta was enough to give the duo the Michelin Pilot Challenge championship by 170 points over Eric Foss.

Wright Motorsports did not announce additional drivers for the team. A Daytona-only driver and a driver for the four Michelin Endurance Cup races will be announced at a later date.