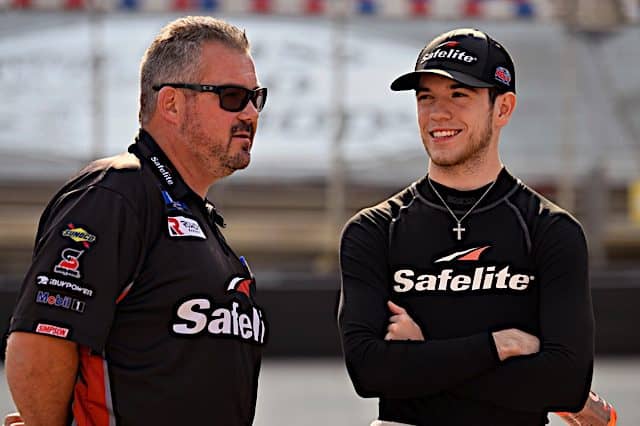 This weekend, it’s all on the line.

The NASCAR Camping World Truck Series heads to Phoenix Raceway to decide its 2022 champion. Four drivers will enter the title battle, and the one who finishes the highest, with or without winning the season finale, will walk away the victor.

After scoring his second win in three races, Ty Majeski is joined by defending champion and teammate Ben Rhodes, Zane Smith and Chandler Smith. The four will square off head to head, no points on the line, and put their all into ending the year on the highest note possible.

It may have taken the majority of the season for Majeski to break through for his first career victory, but it didn’t take that long for him to follow it up with a second one. He won two out of the three races during the Round of 8 and heads into this weekend with an incredible amount of momentum. But what’s more, this team has shown its championship prowess for much of the season.

Sure, there aren’t a ton of wins (see: John Hunter Nemechek last season), but more often than not, Majeski’s name was a part of the conversation on race day. He quietly and consistently put himself into the playoff conversation, and just when the season reached the point where consistency just wasn’t quite enough, he pounced with a pair of wins in the last three races.

That said, this year marks the first full season Majeski has completed in NASCAR, and there’s something to be said for experience when it comes to handling high-pressure situations such as the title race. Of course, I’m not saying he’s going to crumble under everything that’s on the line at Phoenix, but instead, I’m considering that there are others he’ll be racing against that have experience racing for a Truck Series title.

Ben Rhodes heads into this weekend not even a year removed from his first championship weekend and the memorable party-like press conference that followed. But just in case you somehow managed to miss it or just want to relive the hilarity, we’ve got you covered.

In all seriousness, Rhodes looks to join some elite company this weekend. Only four drivers in Truck Series history have won multiple championships (Ron Hornaday Jr., Jack Sprague, Todd Bodine and Matt Crafton), and just one has accomplished the feat in back-to-back seasons (Crafton).

While he’s completed and led more laps this season than during his 2021 championship campaign, an average finish of 12.1 is his worst since the 2017 season when he finished fifth in the standings. It’s been an incredibly inconsistent 2022 for Rhodes, who started the year with five top fives in the first six races, including the win on the Bristol Motor Speedway dirt surface. By comparison, he has just five top 10s in the last 11 races.

The good news for Rhodes’ fans is that he’s the driver with the most experience at Phoenix, and that shows with three straight top 10s dating back to 2019. That includes a career-best third-place finish that was enough to give him the championship last season, but I’m not convinced a third-place run will be enough to win the title this year.

See also
Dropping the Hammer: Ross Chastain Did That

Kyle Busch Motorsports hasn’t won a championship since Christopher Bell did in 2017, and Chandler Smith looks to end that trend this weekend. In just his second playoff appearance, the driver of the No. 18 Toyota has put together four top 10s in six races, including the win at Richmond Raceway that locked him into the Round of 8.

He’s already statistically outpaced his 2021 season, so even a finish inside the top four in points would be a significant improvement year-to-year. That said, no one wants to settle for anything less than the title, and Phoenix has been incredibly kind to the 20-year-old. Smith is the defending winner at Phoenix and had back-to-back third-place results in 2019 and 2020, and that certainly bodes well for his shot at bringing the title back to KBM.

After finishing runner-up in each of his last two Championship 4 appearances, Zane Smith is hoping the third time’s the charm for him when it comes to winning a title.

In what has been his most successful Truck Series season to date, the Front Row Motorsports driver has technically finished every race this season, although his runner-up at Las Vegas Motor Speedway was disqualified and dropped to 36th in the running order following lug nut issues in post-race inspection.

Despite his stronger performance each year, there has to be a bit of self doubt when it comes to finishing second in the championship battle twice. That’s not say Smith isn’t ready to face the challenge this weekend. It’s quite the opposite actually. His 2023 plans are already set, and instead of lobbying questions the last several weeks about what the future holds, he’s been able to focus solely on his on-track performance.

The good news for the FRM driver is that he’s got some solid results at Phoenix in the last two seasons. Finishes of second and fifth are proof he can get around the track well. The key will just be in doing it better than the other three playoff drivers.

My prediction: Winning back-to-back championships has proven almost impossible in the Truck Series, and Rhodes hasn’t run as well this year as he did in 2021. Meanwhile, Chandler Smith has an incredible record at Phoenix, and it’s really hard to argue with finishes of third, third and first in his three career starts. He’s the one to bring the title back to KBM.