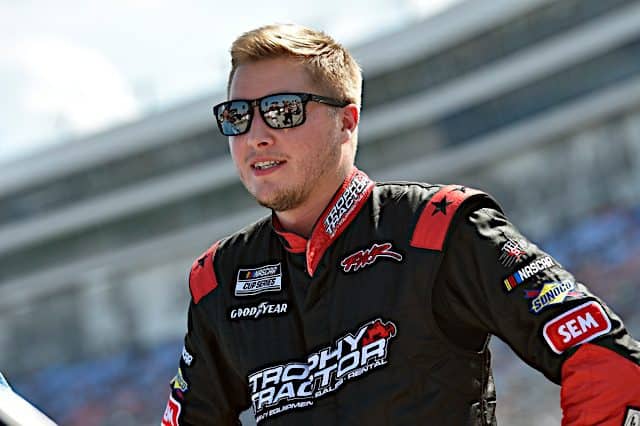 Garrett Smithley will rejoin the NASCAR Xfinity Series field for full-time competition next year, as BJ McLeod Motorsports announced on Nov. 1 it has signed the driver for 2023.

Trophy Tractor will be the primary sponsor for Smithley’s No. 78 for the year.

“I’ve raced with Garrett for several years now, and respect his path, his talent and his passion,” team owner BJ McLeod said in a release. “I often tell people that he has ‘made it,’ and most people do not understand what I mean by that. His story is truly one of hard work, passion and talent.

“The ability Garrett has shown behind the wheel for several years including racing around me is something that I wish more people had a front row seat like I have. Jessica (McLeod) and I are so honored to have Garrett represent and drive for us. The future is bright.”

See also
5 Points To Ponder: Is Anyone Even Interested in Dealing With Ty Gibbs?

The season will be Smithley’s fourth full-time season in the series and first since 2019 with JD Motorsports.

“I’ve always had great respect for BJ and his organization,” Smithley said. “To compete at this level is extremely difficult. Very few understand the effort and sacrifices it takes. For almost a decade BJ has fielded a race car or truck at the NASCAR national level. The entire team is not trying to hide behind the struggles of the last several months, or even years. I wholeheartedly believe that, with some hard work and focus we can surprise some people in this community with some great runs and results”

In his Xfinity career, the 30-year-old has racked up one top five and five top 10s in 145 starts.

In 2022, Smithley has started four Xfinity races, with a best finish of 21st at Charlotte Motor Speedway for DGM Racing. He’s also competed in five NASCAR Cup Series this year, with a sixth coming this weekend at Phoenix Raceway.

Smithley is the first driver to be announced to BJMM’s lineup for 2023.