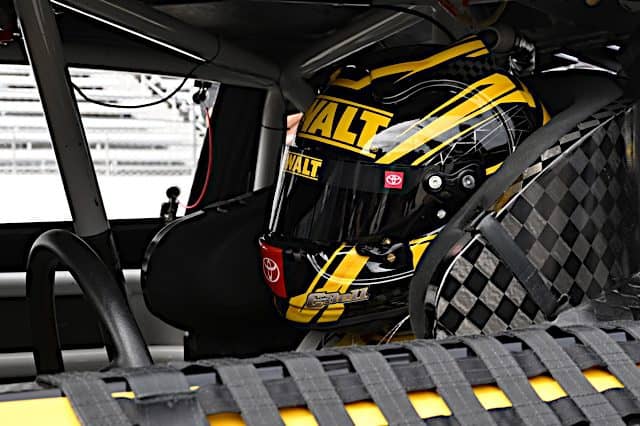 Welcome to this week’s edition of the Monday Morning Pit Box! It’s a brand new Frontstretch column that takes a look at the crucial calls that shaped the outcome of a race, looking at things through the eyes of a crew chief (sometimes, we also look at calls made atop race control, too). We track the thrill of Christopher Bell’s pit road success, courtesy crew chief Adam Stevens, and some calls by Chase Briscoe and others that simply fell short.

This week, those drivers were competing at the oldest active track on the circuit, Martinsville Speedway, for the finale of the NASCAR Cup Series playoffs Round of 8. In an uncharacteristically clean Martinsville race, this year’s Xfinity 500 came down to a call of old tires vs. new tires from a pair of drivers in must-win situations.

In the end, new tires won the day, allowing Bell to pull off another walk-off win and punch one of the final tickets to the Championship 4. Behind the victory and Ross Chastain’s video game-style move were some moments on pit road that made the difference in a track position race.

We begin with the end of stage one. The field had just been on and off pit lane for four fresh tires and Sunoco race fuel, setting up the stage two restart. However, Briscoe drew the attention of race control when his gas can was dragged out of his pit stall. It resulted in a penalty for removing equipment out of the pit box, sending him to the end of the longest line after a fifth-place stage one result.

Crew chief-turned-cheerleader Johnny Klausmeier then had to keep his driver focused under tough circumstances. In a track position race, losing all of it kept the No. 14 trapped in traffic despite a car that showed some speed early in the race.

Chase Briscoe spent all of Stage 1 in the top five. Since his penalty during the stage break, he's been stuck as the lowest-running playoff driver and can't get past 18th.

The penalty eventually cost Briscoe a lap in stage two. He didn’t earn it back until a caution on lap 321 for Austin Dillon’s wreck gave him the free pass.

“The penalty early in the race killed us,” Briscoe explained. “It was really hard to pass and I had to scrap and claw position by position; it took us a really long time to get back up there.”

However, Klausmeier keeping his driver within reasonable striking distance allowed him to make what might have been the call of the race…

The last of six cautions at Martinsville came on lap 470 for Landon Cassill’s crash, forcing a decision for 16 lead-lap cars as to whether they should pit – and, if so, for how many tires. Klausmeier made the call for Briscoe (who had been running ninth at the time) to stay out and take over the race lead. Stewart-Haas Racing teammate Cole Custer also stayed out, moving to second and in position to block for Briscoe after showcasing top-10 speed all day.

On the other side of the spectrum, Christopher Bell’s crew chief Adam Stevens went the conservative route. He brought his driver in for four fresh Goodyear tires, even though it dropped him to sixth in the running order for the restart.

It’s a debate that has been played out time after time in racing: old tires vs. new. A short run, just 24 laps from the time of the final restart, limited the time drivers with fresh tires could head to the front.

Briscoe’s team thought that the short run would favor older tires and it did for the first 15 laps of the run; at one point, his lead was approaching 1.5 seconds. But as the laps wound down, new tires came to life for Bell and he flew by traffic with ease.

With five laps remaining, the driver of the No. 20 Toyota snuck inside of Briscoe, pushed hard on those fresh Goodyears and found his way past to take the lead. From there, he built an edge of 0.869 seconds in winning his second straight race when facing playoff elimination.

“This entire No. 20 group, they just never give up. Our back’s against the wall and it looks like it’s over, and they show up and give me the fastest car out here,” Bell said in a post-race interview with NBC Sports. “Thanks to DeWalt, Rheem, Toyota, everyone on this Joe Gibbs Racing team. They believed in me since day one. Very appreciative to be here and… I don’t even know what to say.”

As for Briscoe, he finished a respectable 10th, but it wasn’t enough as Bell’s win eliminated him from the postseason. Now, Bell can prepare himself and his car to win a title next Sunday at Phoenix while Briscoe was forced to simply wonder what might have been.

“It’s frustrating, the penalty really took us out of it…” Briscoe added in a post-race interview with Frontstretch’s Michael Massie. “[But we] win as a team, lose as a team.”

A storyline that got buried through Martinsville’s phenomenal finish was the return of rubber buildup underneath the Next Gen cars. Throughout the race, we saw three Fords driven by BJ McLeod, JJ Yeley and championship contender Joey Logano all had their cars catch fire after left rear issues.

Smoke was billowing out from under the hood of the No. 15 car of JJ Yeley. #NASCAR

NASCAR has made improvements to these Gen-7 cars since the fires that plagued the Darlington race. However, these improvements did not prevent the ones that we saw during the event at Martinsville. If safety is NASCAR’s top priority, more needs to be done to lessen the risk of these popping up going forward.

McLeod was forced to retire from the race due to his fire; both Yeley and Logano were able to continue, with Logano’s No. 22 Ford climbing up to seventh by the finish. But the issue, which wasn’t caused by any on track contact, added some unnecessary drama to his race.

“We had that fire and had to pit to fix the fire,” Logano explained. “And we lost our track position and then it’s just hard to pass.”

While Fords got the worst of it, several other teams struggled under the weight of cleaning out the extra rubber. Petty GMS Motorsports fully documented a giant chunk they pulled out of the left side of Ty Dillon’s No. 42 Chevrolet.

Um, we just found 𝐓𝐇𝐈𝐒 hiding in the LF of the No. 42… pic.twitter.com/nldIJ873qK

Next week, a season for the ages will come to a close at Phoenix Raceway as we crown a champion. Which crew chiefs will make the right calls at the right time to give their drivers one more shot at victory lane in 2022 and who will get burned in the Valley of the Sun?