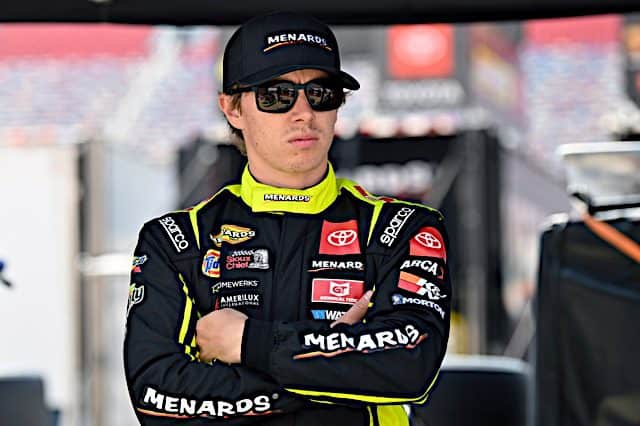 Brandon Jones has been red-hot in qualifying throughout the NASCAR Xfinity Series season, and he continued his excellence in Friday’s (Oct. 28) qualifying session at Martinsville Speedway with a speed of 95.482 mph to earn his fifth pole of 2022.

Sheldon Creed will start on the outside pole for Saturday’s NXS race while Sammy Smith will lead row 2 in third. Both Creed and Smith posted career best starting positions in Xfinity qualifying. Ty Gibbs had the fastest lap in practice and rounded out the Joe Gibbs Racing cars with a fourth-place effort in qualifying. Noah Gragson in fifth was the last driver to break the 20-second barrier in time trials.

See also
Friday Faceoff: Will An Afternoon Martinsville Cup Race Be An Improvement?

Josh Berry (13th) and Sam Mayer (22nd) were the two playoff drivers to qualify outside the top 10. Austin Hill did not post a qualifying lap as USA Network reported that the No. 21 had suffered radiator damage that afternoon.

Dawson Cram (No. 47), driving for Mike Harmon Racing, and Ronnie Bassett Jr. (No. 77), running for his family-owned team, were the two drivers who failed to qualify.

There was one incident in practice, as Daniel Hemric wheel hopped and backed his No. 11 car into the outside wall. He will have to go to a backup car for tomorrow’s race.