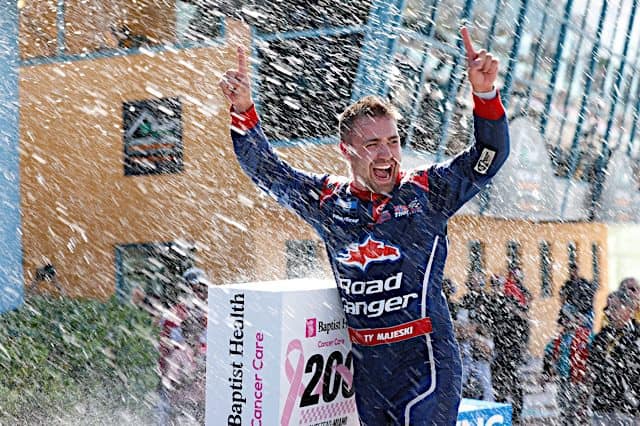 In a race where the all but one truck finished the race, and the only cautions were for stage breaks, Ty Majeski won his second career race – the second one in three weeks, actually – at Homestead-Miami Speedway on Oct. 22.

Majeski led the most laps on the day with 67 circuits around the 1.5-mile facility.

Having already advanced to the Championship 4 by virtue of winning at Bristol Motor Speedway, Majeski is joined by Zane Smith, Chandler Smith, and defending champion Ben Rhodes as the four drivers who will compete for a championship at Phoenix Raceway in two weeks time.

Zane Smith was second behind Majeski, followed by Friesen, Ryan Preece, and Corey Heim rounding out the top five.

After polesitter Preece was forced to start the race from the rear for unapproved adjustments, Rhodes jumped out front early in stage one, leading every lap en route to the stage one win, with Zane Smith right behind him at the finish.

When stage two began, it was Smith who was the faster truck of the two. Despite Rhodes holding him off for the opening laps of the stage, Smith drove by the No. 99 and win stage two, while Rhodes slipped back to fifth at stage end.

Nemechek entered Homestead in a must-win situation after finishing outside the top 10 at both Bristol and Talladega Superspeedway. He rolled off 13th to start the afternoon and attempted to move through the field early.

However, a flat tire on lap 14 sent the No. 4 into the wall. Despite pitting for new tires, the problem persisted, causing Nemechek to pit a couple of times throughout the race, from which he could never recover.

He is told they will be fine. He is now a lap down after this issue. https://t.co/A1fkLMsUrs pic.twitter.com/IujtWiWYlb

He wound up finishing 35th, six laps down and the last truck running (Spencer Boyd was the race’s only DNF, suffering brake issues with a handful of laps to go).

Likewise, Enfinger treated Homestead as a must-win situation, and ran up front for the majority of the race, until his No. 23 suffered the same fate as Nemechek, cutting a tire on lap 81 and hitting the wall. While the damage wasn’t as bad as Nemechek’s, Enfinger was still forced to make his final pit stop earlier than scheduled.

After everyone made their final pit stop, Enfinger found himself fifth, but his nearly 20-lap older tires caused him to fade fast, winding up 14th, one lap down at the checkered flag.

Grant Enfinger says he thinks he ran over something to cause the flat that ended any of his race-winning hopes to advance at Homestead. pic.twitter.com/lk5fwV5PGx

Despite winning stage one, Rhodes found himself right on the verge of elimination at the beginning of stage three, having to fend off both Friesen and his teammate, Eckes.

Friesen’s long run speed was unlike any other, as he found himself third in the closing laps of the race. However, the lack of cautions had resulted in Friesen trailing second-place Zane Smith by 10-12 seconds. With Friesen not going any farther, it was up to Rhodes to not lose any positions.

At the time Friesen took third from Preece, he and Rhodes were tied in points; however, Rhodes held the tiebreaker – highest finish in the Round of 8 (second at Talladega). So when teammate Crafton began to challenge Rhodes for the seventh spot, Crafton was playing with a double-edged sword.

Eventually, the two ThorSport Racing teammates caught up to Eckes, whom Rhodes easily breezed by, ensuring at least a one-point gap between himself and Friesen.

And that was all she wrote. Despite Eckes not advancing, Rhodes was able to take the fourth and final championship spot from Friesen by just one point. Had a caution flown at any point during the race (aside from stage breaks), this may have been a different story.

The Championship 4 is now set – Majeski, the two Smiths and Rhodes. To these drivers, points don’t matter anymore. Whoever finishes highest at Phoenix is the 2022 NASCAR Camping World Truck Series Champion.

You guys mind if we just introduce our #Championship4 for @NASCAR_Trucks 🏆 pic.twitter.com/pNDBwxTcrv

Likewise, Heim has clinched the 2022 Rookie of the Year title. Heim becomes the first driver since Tyler Ankrum in 2019 to win the Rookie of the Year award despite not competing the full season. Heim has missed seven races this season due to Kyle Busch and Buddy Kofoid wheeling the truck for five and two races, respectively.

Paint Scheme of the Race

When a foundation/charity sponsors a race car or truck, the paint scheme is usually one that stands out on track and gets attention.

Tanner Gray’s No. 15 did just that this weekend.

Place of Hope is an organization that rescues abused and neglected children and finds a new home for them. The black with bright blue streaking throughout Gray’s truck sure got some eyes on it this weekend.

The Truck Series has another week off before heading out west to crown a champion in Phoenix. The race kicks off championship weekend, and coverage can be found on FOX Sports 1 beginning at 10 p.m. ET on Friday, Nov. 4.