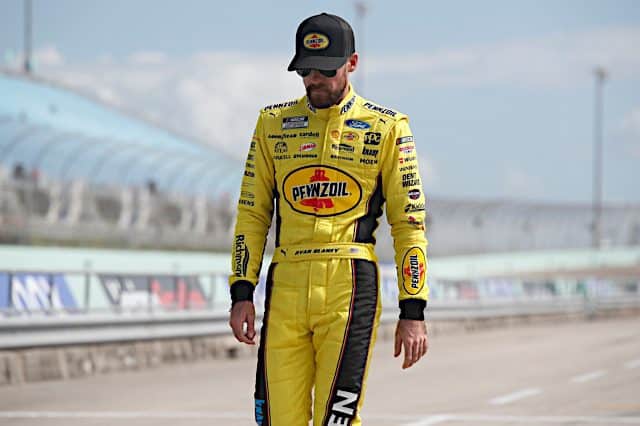 HOMESTEAD, Fla. – It was a picturesque scene at Homestead-Miami Speedway on Sunday (Oct. 23) afternoon, complete with a bright orange southern Floridian sunset that enveloped the cool afternoon sky. It was like something out of a movie.

But for NASCAR Cup Series drivers Martin Truex Jr. and Ryan Blaney, it was anything but. Both of them stood beside their cars with sunglasses adorned and eyes covered, albeit emotions very visible.

Both drivers have gone winless so far in 2022, and Sunday’s race at Homestead didn’t do them any favors after both were involved in incidents that would cost them each another chance at finally earning that first win of the year.

The worst part? It was their own fault.

For Blaney, winning a race on Sunday would have not only meant a relief of finally winning in 2022, but also a punched ticket into the Cup Series Championship 4.

On lap 208, Blaney was running third and having a solid day going into what would have been the final stretch of the 267-lap race as the field began taking their expected green flag pit stops. Only a few laps later, he joined them and entered pit lane in search of four fresh Goodyears.

But when he left, he simply played the wrong hand. Literally. He shifted from second to first gear and spun the car on the pit exit’s access road.

The No. 12 car brings out the caution at lap 211 in the middle of green flag pit stops. #NASCARPlayoffs pic.twitter.com/tQ89yFFdyE

The Penske driver never recovered. He limped his car the rest of the way and finished 17th.

“I downshifted. Second to first. Like a dumbass,” said an embarrassed Blaney on pit road. “Bonehead driver-induced. That part definitely stinks. Driver makes a mistake after the team does a great job … I downshifted this week coming off of pit road, so I’m just disappointed in myself.”

But as one door closes, another opens as they say.

In this case, it swung wide open for Truex. Blaney’s incident brought out the caution at the perfect time for Truex, as the Toyota driver had already made his pit stop and was cycled as the leader.

Kyle Larson, who had dominated the day’s event thus far, restarted behind him. However, despite having the dominant No. 5 car breathing down his neck, Truex actually maintained his lead. In fact, he was even pulling away at points.

Alas, a late race caution flew with 21 laps to go, and the gap that Truex had earned evaporated in an instant. To make matters worse, he and the rest of the lead lap field needed to pit if they wanted to be competitive. All Truex needed was a solid pit stop, but with the way his luck has been, that might have been a tall order.

He didn’t even make it to his stall.

He had help from Kyle Larson. #NASCAR pic.twitter.com/enJPinUvxs

“I definitely slowed down before I committed to my box,” said Truex. “You can’t see a damn thing down here at sunset … I turned late, and I knew I had to tap the brakes as soon as I turned.”

The catastrophic service put Truex 19th at the end of the lead lap and effectively ended any chance at grabbing that ever-elusive victory.

But boy did he try.

With only 17 laps of racing left, Truex rocketed all the way from 19th to finish sixth when it was all said and done, and it occurred in a race where passing seemed to be rare and difficult for many.

It has to make one wonder if only that caution hadn’t waved.

“It stinks, but what a race car to come from 19th to sixth in the last 10 laps,” said Truex on pit road. “It was a freaking rocket at the end. I think we could’ve done it if we could’ve restarted up front.”

At least it’s not all doom and gloom for the duo. Truex still fought to a sixth-place result and Blaney, while 18 points below the playoff cut line, still has one more race to compete in to make the Championship 4.

Even better, it’s at Martinsville Speedway, a track where he has the best average finish out of the whole field.

“I thought we had a good car (at Martinsville) in the Spring,” said Blaney. “It’s kind of like a must-win. I don’t see us making up that many points.