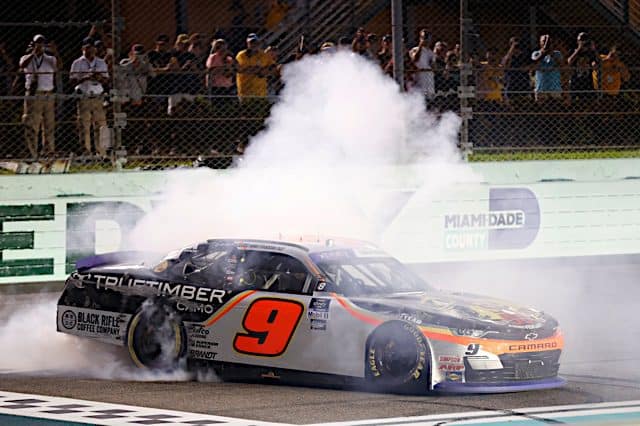 Noah Gragson held off Ty Gibbs and AJ Allmendinger on a late restart to claim his eighth victory of the year in the NASCAR Xfinity Series Contender Boats 300 at Homestead-Miami Speedway Saturday (Oct. 22), locking his place in the Championship 4.

It was redemption for Gragson after he crashed into the back of David Starr with a 15-second lead last year.

Gragson dominated the night, sweeping the stages and leading 127 laps. After a caution came out for a crash involving Stefan Parsons and Kyle Sieg entering turn 1 with 13 laps remaining, Gragson and other leaders pitted, with the No. 9 getting out front. Gragson then held on for his 13th career win.

“We just kicked their ass, baby, let’s go!” Gragson exclaimed after the race. “Yeah, I wanted this one so bad, last three years. Words can’t describe how thankful I am for everybody at JR Motorsports, just unbelievable. …

“I was driving my ass off, threw em up on the dash. Takes a lot of focus to run up on the fence like that. Pit crew did a great job, really grateful.”

Gibbs and Allmendinger placed second and third, respectively, while Daniel Hemric was the best non-playoff contender in fourth. Sam Mayer rounded out the top five.

Polesitter Trevor Bayne was sixth, then Chandler Smith in a career-best seventh. Riley Herbst was eighth, then Austin Hill and Justin Allgaier.

A couple of incidents brought out the caution early on, the first one coming on lap 3. JJ Yeley was running in the second lane with Jeb Burton and Riley Herbst staggered on the outside in lanes three and four. Yeley got loose and was clipped by Burton and turned right into Herbst and in the outside wall, ending his day early.

Then, just before stage one ended, Mason Massey was slow against the wall, while CJ McLaughlin spun around on the backstretch. McLaughlin didn’t hit anything, though, and continued on.

Gragson was well on his way to his first win at Homestead when the caution came out for the Parsons-Sieg incident. Simultaneously, Nick Sanchez also had big right-side damage after he hit the wall. When he came down pit road, his right front wheel well area was on fire.

Hill was very strong, as was Berry. However, both drivers fell victim to tire issues. Berry cut a tire after wall contact, while Hill pitted with 47 laps to go with a vibration. Both drivers ended up off-sequence and having to make up ground.

In Berry’s case, he was up to second and looking good before the final yellow caught him out with no more fresh tires in the pits. As a result, Berry finished 11th.

Hill, meanwhile, made contact with Brandon Jones with about 26 laps to go when Jones appeared to squeeze the No. 21 up against the wall a bit. Hill recovered from the contact to finish ninth, while Jones ended in 15th place.

With one race remaining before Phoenix Raceway, only Berry and Gragson are locked into the Championship 4. Gibbs is 30 points above the cut line, while Allmendinger is five above. Allgaier and Hill are five and seven points, respectively, below the cut line.

Xfinity drivers next take on Martinsville Speedway for the penultimate race of the year. The Dead On Tools 250 airs on Oct. 29 at 3 p.m. ET on NBC.