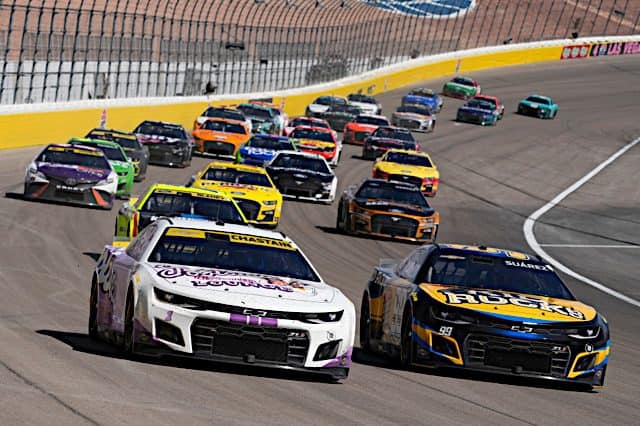 We’ve only got three NASCAR Cup Series races left in the best time of year for sports.

As I’m writing this on Thursday (Oct. 20), it’s the Sports Equinox, in which all four major American sports (the MLB, NFL, NHL and NBA, plus MLS) are all in action. NASCAR was a part of the Sept. 10, 2020, equinox, where, although COVID-induced, there were at least eight major pro sports unfolding. This time of year, MLB and NASCAR are in the thick of playoff action, NFL is almost halfway into its regular season and both hockey and basketball have gotten underway within the past 10 days.

It’s a good time for sports.

A few weeks ago, I likened the NASCAR playoffs to a slasher movie. It felt appropriate, given the time of year and the prevalence of horror movies. The metaphor in this scenario, the NASCAR playoffs, have delivered beyond expectations and have been wildly unpredictable. Hell, Chase Briscoe, who I (and likely many others) had as a first-round out, has made it twice as far as I expected and is a couple very solid races (or, more simply, a win) away from a Championship 4 berth.

The guy who’s already into the final four is Joey Logano, who pulled off a win after battling fellow title contender Ross Chastain late at Las Vegas Motor Speedway. The No. 22 may have had his road to the victory made a little easier by seemingly dominant teammate Ryan Blaney spinning late, but he’s also won before at all three of the Round of 8’s tracks, so it’s a good bet he might’ve made the final round regardless.

Chastain might be the weirdest oddity in this, not because he hasn’t had a good season — he has — but he hasn’t won in what feels like ages. Yet the No. 1 team has quietly made its way into the third round of the postseason, a recent stretch of events devoid of wins but also devoid of drama, which is shocking given Chastain irking quite a few competitors earlier in 2022.

Something easy to overlook given last week’s unfortunate goings-on in Sin City is Chastain’s second-place position in the standings. Everyone’s talking about Blaney, who seemed on track for a potential win, Briscoe, who did quite a bit to help his case toward pointing his way into the next round, Chase Elliott, whose subpar performance didn’t drop him below the cutline but didn’t exactly inspire confidence in the No. 9 team or Christopher Bell, who was caught up in the Bubba Wallace/Kyle Larson fracas and suffered race-ending damage, a hit in the points and a blow to his pride.

But if you look at the season-long stats, Chastain ranks second (tied with Bell) in top 10s all season long with 18. Just ahead of them is Elliott with 19, and no driver has 17. Larson has recorded 16 and a number of other drivers are knotted up a few down the totem pole at 15.

So the Melon Man sits quietly in second in points, 18 points above the cutline, with Elliott behind him at 17 to the good. Denny Hamlin rounds out the four currently safe in the postseason, six above the cut. The No. 11 team hasn’t had the greatest year with an average finish south of 15th and single-digit top fives, yet two wins and a current streak of seven straight top 10s has the longtime FedEx Toyota team in good position going into two tracks he’s claimed victories at before.

And now we head below the cut line. Cue the spooky noises.

First up, William Byron. A few weeks after his revenge on Hamlin at Texas resulted in a penalty that was later softened, Byron now occupies the fifth-place spot at six points from the good. The biggest thing here? Byron has just five and nine top fives and top 10s this year, respectively. Those two wins early on in the year secured his spot in the postseason, but the No. 24 crew has cooled off significantly as 2022 has unfolded. That said, we’re going to Homestead-Miami Speedway this weekend, where he led triple-digit laps last year, and then Martinsville Speedway, where he was out front for more than 200 circuits en route to the win.

We mostly touched on Briscoe at nine points below the cut line, whose clutch pass on the final lap at the Charlotte Motor Speedway ROVAL locked him into the Round of 8 in a shocking elimination of defending champion Larson, and that brings us to Blaney. The No. 12 team is almost the car’s number of points below the cutoff (11) despite a 10-top-five, 15-top-10 season. I remember having an immense amount of confidence after his stellar run to end the regular season last year, and though the team fell short I wouldn’t put it past them to catch fire and finally get a win at some point before 2022 ends.

Finally, poor Bell was collateral damage from the Wallace-Larson mess at Vegas and now sits in yet another points hole. It’s not necessarily the death knell of his title hopes just yet, but that No. 20 stable needs to treat the next two races as must-wins at this point. Bell’s no stranger to short tracks as he’s got wins in spades at Richmond Raceway and Bristol Motor Speedway, so Martinsville might be an opportunity, but it’s all-out desperation for the 2017 NASCAR Camping World Truck Series champion.

I just know I can’t wait for this final trio of races. We’re off to a track we haven’t been to in more than a year-and-ahalf (much less with the new car), a short track and then the championship race in the desert. Let’s do this.