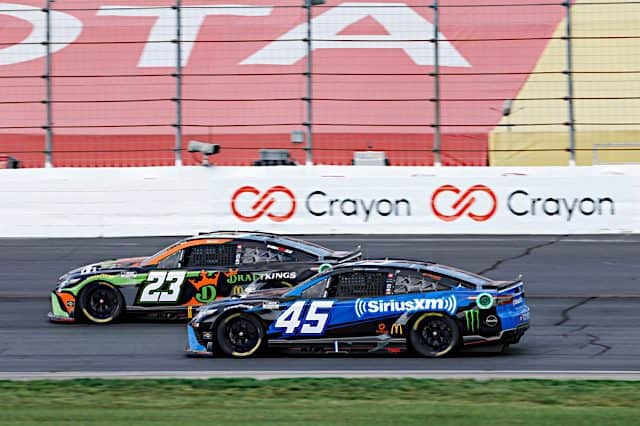 Suffice it to say that 23XI Racing had a rough weekend at Las Vegas Motor Speedway.

On Saturday (Oct. 15) morning, one of the team’s drivers, Kurt Busch, announced that he would not be competing full-time in 2023. Busch is still recovering after getting a concussion in a qualifying crash at Pocono Raceway in July. Although he has not raced since, Busch left the door open to drive again when his health improves. Yet considering how Busch was still competitive and on track to make the playoffs before his crash, it will be a tough blow to 23XI to not have him racing every week.

The team’s other driver, Bubba Wallace, sparked the biggest controversy of the race weekend. Wallace had a fast car at Las Vegas and even won the first stage. But on lap 94, while battling for position with Kyle Larson, Wallace hit the wall at the exit of turn four when Larson squeezed him into the upper groove. In an apparent act of retaliation, Wallace swooped down the track and hit Larson in the right rear corner. Larson’s No. 5 spun back up the track and hit playoff driver Christopher Bell before slamming into the frontstretch wall. The contact made Wallace lose control, and he spun into the wall too. Wallace confronted Larson after they climbed out of their cars, setting off a brief scuffle in the infield grass. On a day where Wallace could have contended for the win, a moment of anger relegated him to last place.

It feels like 2022 will go down as a year of missed opportunities for 23XI. Busch and Wallace each won a race at Kansas Speedway this season, but Busch chose to withdraw from the playoffs due to his injury and Wallace’s victory came too late to qualify for the postseason as a driver. Wallace might have been able to make the playoffs on points, but his team was bogged down by mechanical issues and mistakes on pit road early in the season. Things have clearly improved since then, but Wallace’s impulsive revenge on Larson left the No. 45 team with nothing to show for its efforts on Sunday. The only thing that can be said for 23XI from last weekend is that Ty Gibbs, Busch’s fill-in driver, at least managed to bring his car home in one piece, albeit in 22nd.

However, the 2023 season is shaping up to be a very good one for 23XI. Busch’s departure, though discouraging, opens the door for Tyler Reddick to join the team a year earlier than initially planned. Reddick still had one more year on his contract with Richard Childress Racing, and Childress’ earlier statements indicated that Reddick would compete with the team in a third car next season. Instead, Reddick can now get a fresh start with his new team rather than spend a lame duck year at RCR. Besides, it’s worth wondering how serious Childress was about starting a third team anyway.

Reddick may not be able to replace Busch’s experience, but he will have the ability to contend for championships with 23XI. In this season alone, Reddick has won three races, the first RCR driver to win multiple Cup races in one year since Kevin Harvick in 2013. Reddick also has 10 top fives this season (a career best) and 15 top 10s (only one fewer than last year). Once again, to find an RCR driver with similar numbers to those, you would have to go back nearly 10 years to Harvick and Ryan Newman. Reddick has taken RCR to a level of competitiveness it has not seen in nearly a decade. If 23XI can succeed where RCR failed and sign Reddick to a long-term deal, it has the capability to be one of the best teams in the sport for years to come.

Wallace has a lot to look forward to in 2023 as well. Although he has not had a season on the level of Reddick’s, Wallace has shown steady improvement throughout 2022, a trend that should continue into next year. Consider how, after finishing second in the Daytona 500, Wallace didn’t get another top 10 until Kansas in May (the race Busch won). Then, it took Wallace another seven races to get back to the top five with a third place at New Hampshire Motor Speedway. That wound up being the first of four consecutive top-10 finishes.

Even better was Wallace’s win in the return trip to Kansas, the second win of his career. Wallace’s first win came at Talladega Superspeedway about a year ago in a rain-shortened event. Often times, if a driver’s first win comes at superspeedway, questions linger about whether the driver can win at other types of tracks where drafting and the unpredictability that comes with pack racing do not heavily influence the outcome of the race. Wallace left no doubt at Kansas, running away from the field over the final green flag run to score a decisive victory.

Wallace may have been expecting a similar outcome at Las Vegas, which is probably why he reacted so quickly and forcefully to Larson. That incident had all the makings of a driver who is new to running up front feeling like an opportunity to win got taken away from him. As a result, he acted rashly. But while this perhaps explains what Wallace did, it does not excuse his actions. Even with the contact, his day was not ruined until he caused Larson, Bell and himself to crash.

No doubt there will be some difficult conversations in the days ahead for Wallace. He is often his own biggest critic and has been open with his struggles in dealing with the emotional demands of being a professional athlete. Yet he’s certainly not alone in that regard. If Wallace were to seek advice about how to learn and grow from on-track controversy, who could be a better resource than his teammate, Kurt Busch? Hopefully, Wallace will learn from this experience and not allow it to hang over his head.

Wallace’s controversy and Busch’s announcement created a weekend of darkness for 23XI Racing, but the team’s future is still bright. Two years ago, it was fair to wonder if a team co-owned by Michael Jordan and centered on an unproven driver like Wallace could ever achieve significant results in the Cup Series. But with Wallace’s newfound speed and Reddick coming on board soon, 23XI has all the pieces in place to take the next step forward in 2023.

I expect that the future for them is very bright. So far, they have been in Trackhous’s shadow. But they showed with Kurt, & Bubba that they could field winning cars.
There may be a period of adjustment, but I think in Reddick, they’ve signed one of the sports future super stars. I see him as the one to show what they’re capable of. If they can retain him.