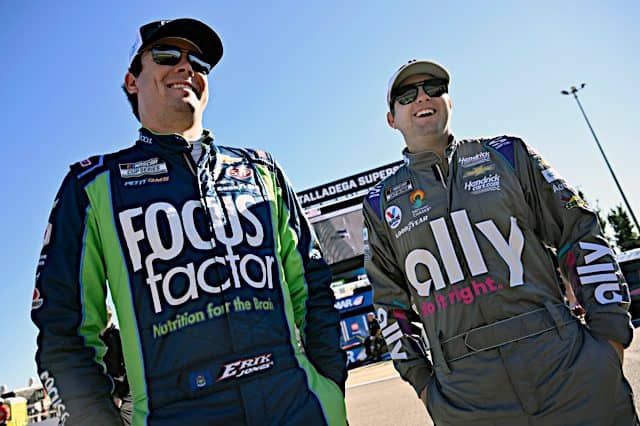 Erik Jones and a Richard Petty-owned team have been on similar pathways the past couple of years. For Jones, it was the voice of fans questioning whether he was a bust as he could never shine under the Joe Gibbs Racing lights like his teammates. For Petty GMS Motorsports, which was known as Richard Petty Motorsports from 2009 through 2021, it was the question of whether the team could ever return the No. 43 to glory after years of financial woes and lackluster results.

Turn the page to 2022 with Jones in his second season with the organization and a merger between GMS Racing and RPM, and it has begun to answer both questions. Jones notched his 13th top 10 of the season with an eighth-place finish at the South Point 400 at Las Vegas Motor Speedway (Oct. 16).

Jones showed speed off the truck, putting his No. 43 near the top of the board in Saturday’s practice, though he didn’t qualify all that well.

After starting in 22nd, Jones struggled with the balance of his car, only advancing one spot by the end of the stage. The car improved in stage two as Jones drove up into the top 10 at one point, but the end of runs took a toll on his car. Jones finished stage two in 18th.

In what has become the norm in 2022 especially, the final stage featured aggressive restarts and close calls. Crew chief Dave Elenz helped call for the right adjustments, improving the balance on the No. 43 to face the slick track. Jones climbed inside the top 10 in the final stage, going toe-to-toe with multiple playoff drivers.

A couple of cautions in the final stage mixed the field up on track position, but the 26-year-old was able to take care of his car, allowing him to reach the top five with about 20 laps to go. By the end of the race, he only yielded a couple of spots to stay inside the top 10 when the checkered flag dropped.

Jones’ 13 top 10s match his total from his last season with JGR in 2020. He only needs one more to parallel the 14 he landed in his rookie season with Furniture Row Racing. It is also his third top 10 in the last four races, giving him four top 10s in seven playoff races despite missing the postseason.

For Petty GMS, the mark goes much deeper. While GMS did merge with the team, Jones only needs one more top 10 to tie the most top 10s by a Petty driver since 2009 when Kasey Kahne earned 14 such finishes. That was the first season of RPM after merging with Gillette Evernham Motorsports.

As non-playoff teams try to close 2022 strong and focus on 2023, this will be a team ready to set the bar even higher next season.

If Kaulig Racing needed any more verification to go with AJ Allmendinger as its full-time Cup driver in the No. 16 next season, it’s certainly getting it. The Dinger pushed through to finish ninth, giving him five consecutive top 10s in his Cup appearances.

Allmendinger ran around the top 15 for most of the race. A caution for Ryan Blaney with just over 30 laps to go allowed Allmendinger to get four fresh tires, which turned out to be the right call down the stretch. A couple more cautions bunched the field up, allowing Allmendinger to work methodically through the field and earn his seventh top 10 in just 15 starts.

Given the parity in 2022, there are no guarantees for 2023. But considering Allmendinger’s road course prowess, mixed with his ability to fly under the radar for strong results, this is a driver I’m penciling in for the playoffs next season.

Allmendinger’s teammate Justin Haley looked like he might carry his late-season surge to an upset win. After the caution for Blaney, Haley took two tires on the stop to catapult him to the lead. Track position, clean air and a little bit of luck appeared to be the right deck of cards for Haley, who led 16 laps.

On a restart with 16 laps to go, Haley battled Chase Briscoe for the lead when Ross Chastain made Haley the meat in a sandwich. The fresher tires of others combined with dirty air were too much for the No. 31, who fell back to 14th by the finish. Regardless, it was another moment to mark down as this young driver shapes himself into a dark horse playoff contender for next season.

In what has been a career year for Michael McDowell, 2023 will look (and sound) a lot different. Crew chief Blake Harris will depart the team after one season atop the No. 34 box to make the calls for Alex Bowman at Hendrick Motorsports.

Obviously, that is an opportunity that is hard to pass up, but it also marks the end of what was a fruitful partnership with McDowell. McDowell told Frontstretch in June that “[Harris] had all the right stuff, but chemistry and communication is hard. It just takes time.”

The two have certainly found something that has worked, giving McDowell his best Cup season to date. Now, for that progress to reach the next level, it will have to come with a new shot caller. McDowell finished 19th at Las Vegas in a somewhat quiet day.

Three underdogs suffered issues in the final stage. With just over 70 laps remaining, JJ Yeley cut a tire on his No. 15 and went for a spin into the infield grass. Landon Cassill was running 13th with just over 20 to go when he spun and backed into the outside wall. Cassill reportedly had a toe link go through his radiator. Yeley finished 31st while Cassill was 32nd, respectively. Ty Dillon also had a DNF in 33rd after contact with the outside wall caused a suspension issue.

His day will unfortunately end early after contact with the outside wall. pic.twitter.com/AFLcWO9nTT

Jones (eighth): “We had a good, uneventful day in Las Vegas with another solid top-10 finish. We had speed all weekend, didn’t qualify where we wanted, but were able to adjust on our Chevy all race to improve throughout the day. We were there at the end, just needed a little more to get up front and be in the mix for the win. We’ll head to Homestead next weekend where I feel like we made gains at the test a few weeks ago and see what we can do.”

Allmendinger: “Overall, I felt like it was a solid day for our No. 16 Chevrolet team. We fought being a little bit tight most of the day. Track position was critical and we lost that a couple of times. I was fairly happy with the speed we had. The car was fairly comfortable. We had one run where we got really loose, but other than that, we just fought the front issue. We had good speed, and it’s something to build on when we come back to Las Vegas Motor Speedway in March. To get another top-10 was really solid and I’m proud of both cars. Justin (Haley) was fast. We’ll keep working on that.”

Haley (14th): “The caution came out, and the tires cycled way too tight to stay in the lead. Heck of a call by Trent Owens. It’s cool to run up there and battle for the lead in the closing laps. The speed of this Kaulig Racing team is kind of coming around. We had a rough summer, but with AJ working wth us, a lot of sim time at GM, we’re starting to make forward progress. It’s so hard to build a race team from the ground up. It takes time. Super proud of everyone at Kaulig Racing. Got AJ in the top 10. Good runs. We keep building this into the offseason and hopefully next year will be really good.”

Dillon (33rd): “We had a good day in Las Vegas and were on our way to a strong run but made contact with the wall late in the race and broke something in the suspension that ended our day early.”

Coming into the 2002 UAW-GM Quality 500 at Charlotte Motor Speedway, the championship picture had been dramatically shaken two weeks prior. Sterling Marlin had just lost his points lead a couple weeks before, only to have his hopes completely derailed when he suffered a fractured vertebrae at Kansas Speedway.

Team owners Chip Ganassi and Felix Sabates put young up-and-comer Jamie McMurray in the No. 40. What followed was similar to the Dallas Cowboys putting Cooper Rush in to hold the fort for the ailing starter only for the backup to make a mark of his own.

Despite a mediocre Xfinity career at the time, McMurray pulled off one of the biggest upsets in NASCAR history. With past and future champions in Bobby Labonte, Tony Stewart, Jimmie Johnson, and Kurt Busch leading a combined 187 laps, it was the Joplin, Miss. native leading a race-high 96 laps.

Lapped traffic in the closing laps held up McMurray, allowing 2000 Cup champion Labonte to close in. But the rear bumper was all he could get to, as McMurray held on for the victory in just his second Cup start. It was the quickest win in the modern era.

McMurray would earn a full-time ride in 2003, finishing 13th in points and winning Rookie of the Year. The now 46-year-old won seven races at the Cup level.

Ricky Stenhouse Jr. brought out a bright scheme for the Las Vegas desert with Kona Brewing Co. making their debut on the No. 47. The car was hard to miss in the “Neon Garage” and on the track. Stenhouse spun in stage two on a restart but would recover to finish in 23rd.

4 tires and fuel for the No. 47 @KonaBrewingCo #BigWave Camaro. pic.twitter.com/lGQLhVjiQh