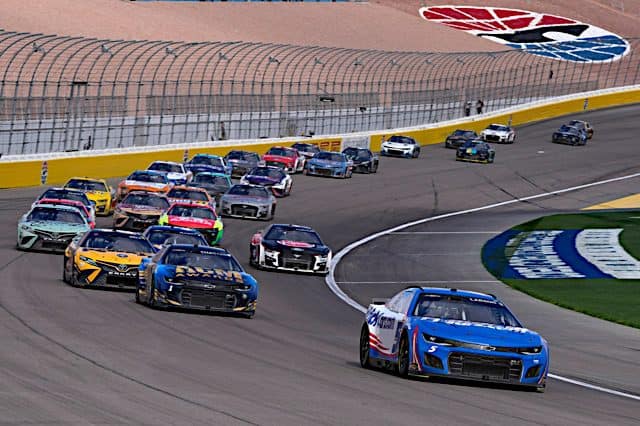 Remember how in years past mile-and-a-half NASCAR circuits were among the most criticized on the schedule?

All six tracks around the 1.5-mile mark faced backlash for lackluster racing, but the advent of the Next Gen car has marked a turning point for them — or, at least, some of them.

With such tracks making up two-thirds of the 2022 NASCAR Cup Series playoffs’ Round of 8, let’s check out how each has found a renaissance this year (with the exception of Homestead-Miami Speedway, which hasn’t held an official Cup race with the new car yet).

OK, this is admittedly a bit of a special case.

Atlanta’s reconfiguration switched the racing into more of a superspeedway-style event, with close-quarters pack racing featured throughout much of both races and some Talladega Superspeedway-esque crashes.

That said, the racing was a unique blend of the normal 1.5-mile action we were used to with pack racing mixed in. It gave us the potential for underdog winners, last-lap passes and consistently two-wide (and sometimes three-wide) action.

Corey LaJoie threw his No. 7 into the trail mix bag of contenders a few months back at Atlanta, appearing to be in position to make a move on Chase Elliott in the closing laps until circumstances sent his car around and ended the race under caution.

Though the Coca-Cola 600 is now the only Cup race we get on Charlotte’s oval circuit nowadays, this year’s edition was one for the ages.

See also
Fire on Fridays: NASCAR Should Be Alarmed by Tony Stewart's Comments

In the 11 races since the start of 2015 at Charlotte, four of them — more than a third — featured the winner leading more than half the race. Dominance was key in North Carolina, yet this spring’s race was one of the wildest of the year on any track layout.

It featured the most cautions in any oval Charlotte race since 2005, a flip in the infield from Chris Buescher, a four-wide pass attempt in the trioval (spoiler: it didn’t go well) and a ton of on-track action that never wavered in entertainment value. Added to that were 3,821 green-flag passes, which ranks near the top of the past decade’s races on the North Carolina oval.

True, it was a five-hour slog to some degree, but it got me excited for the next year’s 600 in a way I haven’t been for quite some time.

After a long stretch of mediocre races at Kansas, 2022 put on a couple of barn-burners — both, coincidentally, won by 23XI Racing drivers.

Despite those middling races, the track got a reputation for weirdly violent crashes: Aric Almirola was injured, and Erik Jones went airborne in separate races in 2017 while William Byron ended up on top of Ryan Newman in 2018 and Ryan Preece went headlong into the inside wall at full speed in 2020.

Fortunately, that wasn’t the case for 2022, but solid, exciting races were. Kurt Busch dueled with Kyle Larson and brother Kyle Busch all race long in the spring, falling back but eventually surging to the front again and claiming 23XI’s first flag-to-flag victory.

A few months later, his teammate Bubba Wallace passed Alex Bowman on speed late in the race and held off team owner Denny Hamlin for his second career victory.

Not much to say here, because neither race at Texas was all that great this year.

The All-Star Race was a bizarre evening, with Ryan Blaney’s dominance nearly derailed by the window-net debacle.

Nah, the later race was even weirder.

Texas’ fall race devolved into controversy, chaos and mayhem, chiefly the Hamlin-Byron incident. Byron spun Hamlin under caution and NASCAR apparently missed the entire thing, causing them to hand down a penalty days later and then rescind part of it a week after that.

Around the same time, Ty Gibbs swerved into the side of Ty Dillon on pit road, coming dangerously close to hitting crew members and officials servicing other cars.

After a four-and-a-half marathon, Tyler Reddick emerged the winner of a race that stretched into night and ended under the lights.

It’s very hard to count Texas in the improved category, given the general bizarro nature of both events and the fact that the All-Star Race doesn’t really count.

While there’s only been one race in Sin City so far this year for the Cup Series, it was an exciting one that provided two all-out teammate battles for the lead in the closing laps.

After a lengthy duel between Joe Gibbs Racing teammates Busch and Martin Truex Jr. — where the No. 19 caught Busch for the lead with almost 10 laps to go — a caution flew and threw a massive wrench into everyone’s plans.

That meant Hendrick Motorsports teammates Larson and Bowman were able to leapfrog them for the lead through pit strategy and sort it out among themselves, but it didn’t come easy for eventual winner Bowman: he and Larson were side-by-side for almost the entire two-lap shootout, with the No. 48 getting the edge late and crossing under the checkered flag ahead of the defending spring Vegas winner.

That might’ve been Truex’s best chance at a win this season to date, so I wouldn’t be shocked to see him up front again this weekend.

Unfortunately, we don’t have much to go on for Homestead, but given the improvements across mile-and-a-half tracks we’ve seen all season long, I’ve got my hopes up.